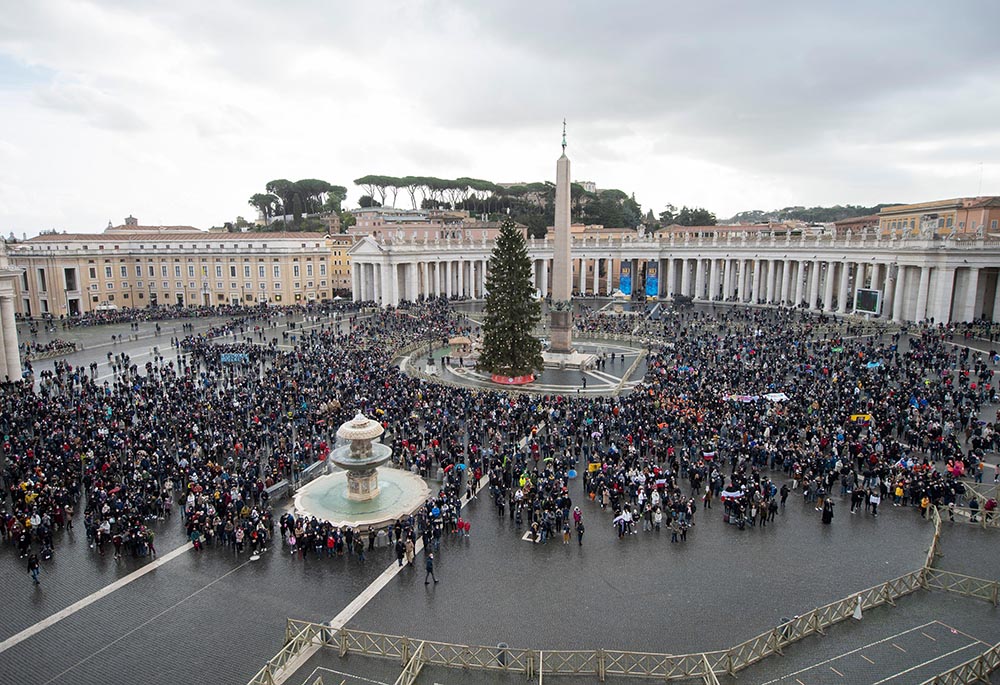 People in St. Peter's Square attend the Angelus led by Pope Francis from the window of his studio overlooking the square at the Vatican Jan. 6, the feast of the Epiphany. (CNS/Vatican Media) 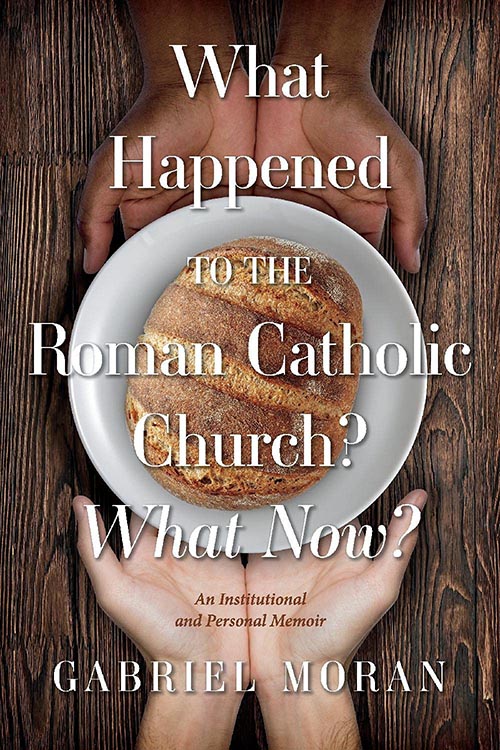 What Happened to the Roman Catholic Church? What Now?: An Institutional and Personal Memoir
Gabriel Moran
274 pages; BookBaby
$14.95

Gabriel Moran, who was always courageous, curious and respectful as he posed new ideas with a slightly mischievous glint in his eyes, wrote What Happened to the Roman Catholic Church? What Now? at the very end of his long life. He died on Oct. 15, 2021, and was buried with his Christian Brothers in Rhode Island.

While others were struggling with the liturgical changes mandated by the work of the Second Vatican Council (1962-65), my sense of the Divine in reality shifted dramatically while studying theology at Manhattan College under Moran's tutelage in the '60s and '70s.

Moran's classic and most well-known publication was his Theology of Revelation, published in 1966, just a year after the Dogmatic Constitution on Divine Revelation, Dei Verbum, was promulgated by Pope Paul VI. Originally, the question Moran was asking in his doctoral work was: "Is it Scripture or tradition or both that reveal God to us?" In the process, he focused on "What really is divine revelation?" In so doing, he stumbled into a controversy that was centuries old. 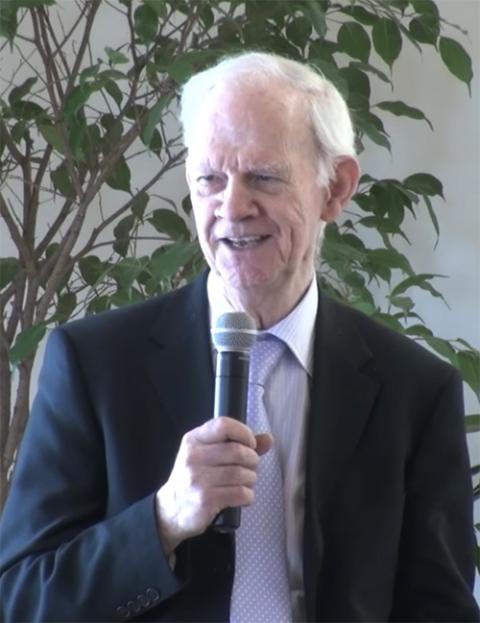 His now classic book based on his dissertation work challenged the church's narrower description of revelation, as it broadened the concept of divine revelation and, for me, opened up a new approach to how God can be experienced.

That process is evident in What Happened to the Roman Catholic Church? What Now?.

This book is complex, well-studied and very readable if one wants to take a hard look at our church's reality today. If you grew up in the '50s or the '60s, when seismic shifts were happening within the Roman Catholic Church and society itself, or if you are curious about those shifts, this book would be a good way to examine what happened.

The author states on Page 7 that this book is "for Roman Catholic readers who wish to understand what is going on in their church." It could also be a good read for those outside the church who want to understand some of the dynamics that led to our church's current evolution.

In many ways, this final book of Moran's invites us to consider new aspects of issues we may have assumed that we had grasped. The book raises questions that are provocative, and it offers insights about numerous issues that many of us ponder in our hearts.

Some call this book radical and, in the real sense of that word, it is, for it gets at the roots of the current situation in our church. However, in the sensational use of that word, it is not. This is a scholarly work in an approachable style. The historical summaries are helpful and accessible.

Reading about Vatican II and other key moments in church history provides good platforms for seeing possible paths forward, with particular emphasis on 1945 through the end of Vatican II in 1965 and the publication of Humanae Vitae in 1968.

The period when I was growing up (1945-60) is therein titled "The Calm." Rightfully, Moran describes that "the calm" had rumblings below the surface. After all, this was the period of dynamic lay movements within the Catholic Church — Young Catholic Students, Young Christian Workers, and Christian Family Movement, to mention a few that touched my own life.

During that period the likes of Thomas Merton and Daniel Berrigan called all to act beyond what was expected and to still stay faithful to the church. That period, according to the author, also brought out "the sacramental and mystical nature of Catholicism at its best."

Going way beyond the polarization that often stymies discussion, Moran raises such issues as church structure, abortion, sexuality, the role of women, the clerical imprint, war, the laity and priesthood itself. During his lifetime, Moran was a brilliant probing thinker and a prolific writer on varied topics, from the theology of revelation to the experience of dying. Even Pope Francis' popularity and value to the world, recognized as powerful, is here critiqued in the context of its limitations in a hierarchical, male-led structure.

This work is an intriguing combination of scholarly probings into controversial topics alongside some sensitive, almost tender, sharing of personal experiences.

Another important aspect of this book is its masterful foray into the role of language in the evolution of the Roman Catholic Church. That caught my attention as a former English teacher who is sensitively aware of the limits of some liturgical and theological language. Having studied Latin for three years in high school and faithfully prayed the Divine Office in Latin for some six years, I simply loved it when we began to worship in English. Language is important.

Moran asks, "Can the Church survive the translation from Latin?" This book offers some insight to that question.

The heart of this book for me was in Chapter 10 where Moran explores "Presence" and follows with two chapters on community. In Chapter 10, he intricately weaves the notion of Real Presence into the phenomenon of presence in our human relationships.

Moran featured the writings of Richard Rohr, Ilia Delio, Diarmuid O'Murchu and others I have not yet read, and distinguishes between the historical Jesus and the Christ of the Book of Revelation. His work challenges us to understand that unless we recognize that the Resurrection really did make a difference in how God is present to us and in our very lives, we may be simply recollecting what happened some 2,000 years ago. 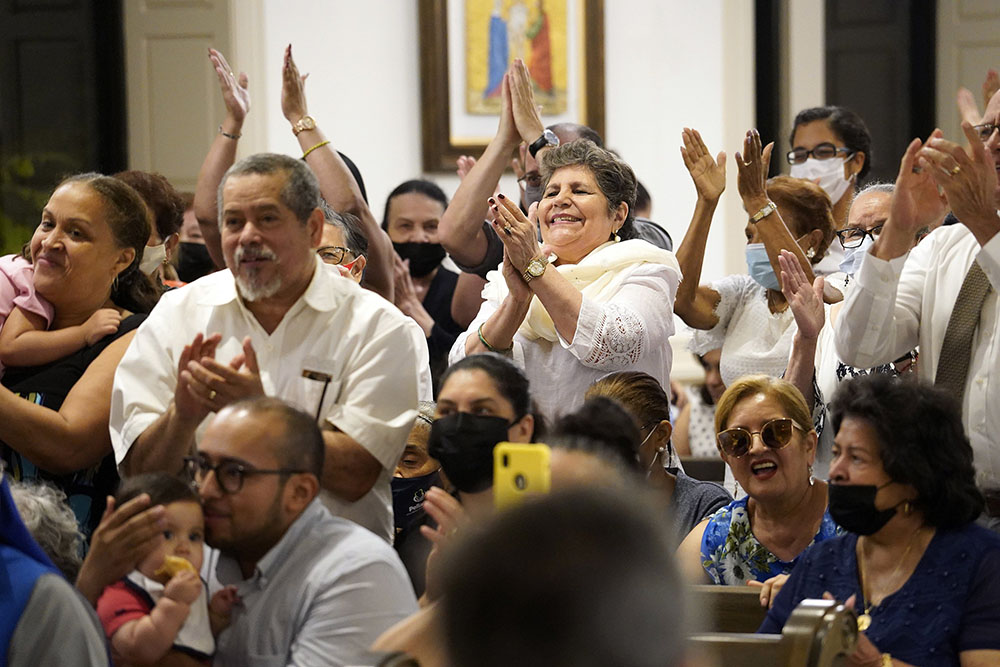 Parishioners react during the dedication of Sts. Peter & Paul Church in the Brooklyn borough of New York City June 29, 2021, the feast of Sts. Peter and Paul. The Mass marked the first time since 2008 the Brooklyn Diocese had opened a new church. (CNS/Gregory A. Shemitz)

Equally core to this work is the historical reality of Vatican II, as the reaction to it reverberates in the life of the church today. At a time when Francis is promoting deep listening at all levels of the church, the pertinence of this work is clear. Opening up the reality of divine revelation as ongoing speaks to this current ecclesial effort to listen well across the globe.

The meaning of Vatican II is explored here in a new way for me and the hope for our church is, too. This book imagines the church as a community of communities (described as between eight and 11 people in each) with a 10- to 15-year-long priesthood that rotates and includes both men and women.

"Imagines" is the key word here. At a time when Francis is calling us all as Catholics to synodality in our church, this final book by Moran is a good stepping stone to imagining new ways to be church.

Opening up the reality of divine revelation could allow us to gradually become, as church, a community of communities. The challenge of this is obvious, even in this day of instantaneous communication, advanced education and the relative ease of world travel. According to Moran, an organization whose goal is community needs to follow the best lights of its tradition and "listen for the truth in the hearts and minds of its members."

Clearly, our church is in transition as the importance of visible structures is supplanted by an invitation to listen to one another and by a dynamic open-ended process of coming to grasp the reality of the Risen Christ's presence today.

What Happened to the Roman Catholic Church? What Now? by Gabriel Moran touches into my experience of church and admittedly leaves me a bit unsettled. Nevertheless, I look forward to further discussion of church using this book as a springboard.

A version of this story appeared in the Feb 18-March 3, 2022 print issue under the headline: Author contemplates Catholic Church's future by examining its recent past.