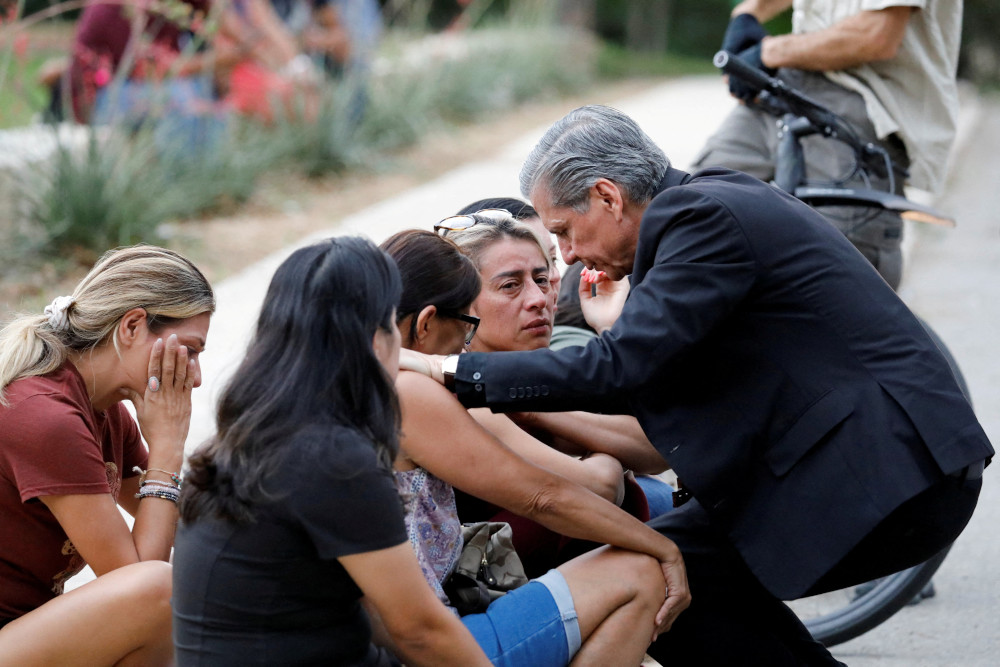 Archbishop Gustavo García-Siller of San Antonio comforts people outside the SSGT Willie de Leon Civic Center, where students had been transported from Robb Elementary School after a shooting, in Uvalde, Texas, May 24. (CNS/Reuters/Marco Bello)

In response to recent mass shootings, Pope Francis and the U.S. Catholic bishops have called for gun control measures that would save lives. This undoubtedly surprises some people who think that abortion is the only public policy concern of the church's hierarchy. Sadly, the media and the bishops themselves give too little attention to the larger "life" agenda.

While praying for the children killed and their families in Uvalde, the pope did not hesitate to say, "It is time to say enough to the indiscriminate trafficking of arms."

Francis has frequently denounced gun trafficking, including in his 2015 address to a joint session of Congress. "Why are deadly weapons being sold to those who plan to inflict untold suffering on individuals and society?" he asked U.S. lawmakers. "Sadly, the answer, as we all know, is simply for money: money that is drenched in blood, often innocent blood."

After the Uvalde shooting, Chicago Cardinal Blase Cupich did not mince words.

"Who are we as a nation," he asked, "if we do not act to protect our children? What do we love more: our instruments of death or our future?"

"The Second Amendment, unlike the second commandment, did not come down from Sinai," Cupich told NPR. "There is an understanding that we all have in our hearts, engraved in our hearts, a natural law about the value of human life. And there is no amendment that can trump that."

Cupich was not alone in speaking out. On behalf of the U.S. Conference of Catholic Bishops, the chairs of four conference committees issued a statement urging all members of Congress to action in response to the killings.

These were not liberal bishops, but four of the most conservative prelates in the United States: Archbishop Paul Coakley of Oklahoma City, Archbishop Salvatore Cordileone of San Francisco, Archbishop William Lori of Baltimore and Bishop Thomas Daly of Spokane, Washington.

They urged dialogue and concrete action that "addresses all aspects of the crisis, including mental health, the state of families, the valuation of life, the influence of entertainment and gaming industries, bullying, and the availability of firearms." They called for "the passage of reasonable gun control measures," echoing the pope's pleas that "It is time to say 'no more' to the indiscriminate trafficking of weapons."

In their letter June 3 to Congress, these bishops got into specifics on what they considered "reasonable" gun control.

They complained that, "In the ten years since the massacre of children at Sandy Hook, very little has been done by Congress to regulate these weapons and prevent another catastrophe. We urgently call on members of Congress to work together in a bipartisan fashion to make these horrific attacks less likely to happen again."

The bishops point out that they are not "Johnny-come-latelies" to the discussion of gun violence, noting that as early as 1994 they issued a pastoral message "Confronting a Culture of Violence: A Catholic Framework for Action."

"For many years," the bishops tell Congress, "the U.S. Conference of Catholic Bishops has supported a number of reasonable measures to address the problem of gun violence and continues to support efforts by the U.S. Congress to advance these policies in legislation."

"It should not be the case," they argue, "that in the United States, a person needs character references to apply for a job but not to purchase military-style assault weapons."

"For many years, the U.S. Conference of Catholic Bishops has supported a number of reasonable measures to address the problem of gun violence and continues to support efforts by the U.S. Congress to advance these policies in legislation."

They also support universal background checks for all gun purchases and criminalizing gun trafficking. The bishops added their support to recent proposals to set a more appropriate minimum age for gun ownership.

The U.S. bishops' conference website has additional recommendations: "Regulations and limitations on the purchasing of handguns; measures that make guns safer, such as locks that prevent children and anyone other than the owner from using the gun without permission and supervision."

Another page on the website provides visitors an easy way to write their senators and representatives in support of these gun control measures.

Sadly, hardly anyone in the country knows about the strong and comprehensive position on gun control taken by the U.S. Catholic bishops. Bishops rarely talk about it. Catholics don't hear about it from the pulpit in church. The media does not report it.

Perhaps the Catholic clergy fear upsetting the faithful by talking about gun control, but according to a 2012 PRRI poll, 62% of Catholics support stricter gun control, way higher than the 35% support coming from evangelical Christians.

Catholic social teaching has been referred to as the church's best-kept secret. The bishops' response to gun violence should no longer be a secret. It should be preached from the rooftops.