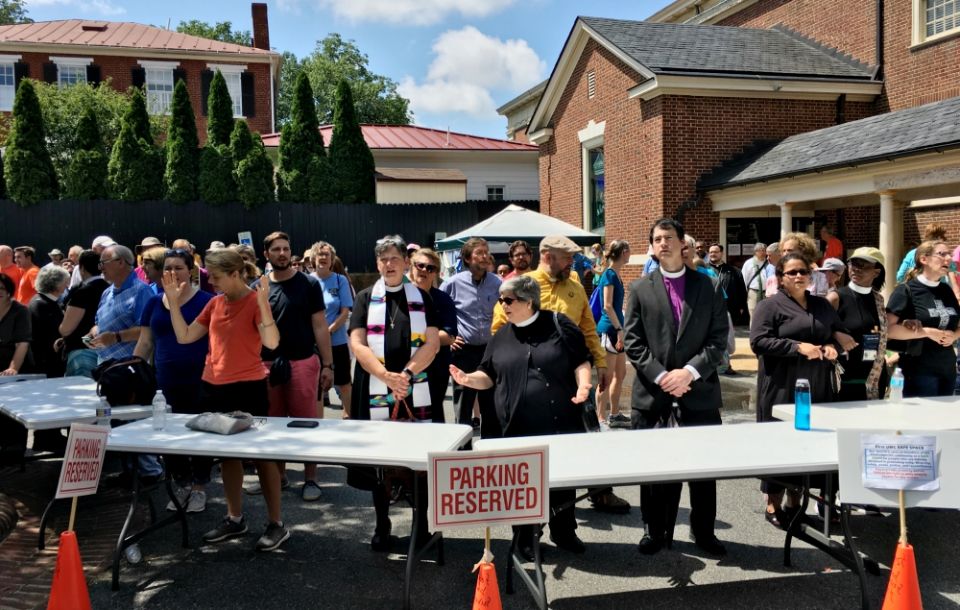 Clergy lead a gathering in song in Charlottesville, Virginia, on Aug. 12. (Flickr/Evan Nesterak)

Two presidential business councils have been dissolved in the wake of President Donald Trump's remarks regarding the tragedy in Charlottesville, Virginia.

Military leaders have denounced racism and white supremacy in no uncertain terms.

A number of Republican Senators have challenged the president's words that both sides were responsible for the violence in Charlottesville.

The Arts and Humanities Council has disbanded.

A segment of the counterprotesters in Charlottesville was a large group of local clergy protesting the hate espoused by the groups who marched.

I received an e-mail from my niece in Charlottesville who expressed her disappointment that she saw no Catholic priests represented in the clergy group. I have also been eagerly waiting for some word from the pulpit that even acknowledged awareness of what had taken place in Charlottesville. I have heard none.

I know there has been a pre-Charlottesville statement from the Catholic bishops attacking discrimination against immigrants and others.

I don't doubt that there are other examples of Catholic involvement in supporting equality for all. I also have no doubt, however, that it is not nearly enough.

I guess my problem is that I was in the seminary during the civil rights movement of the 1960s. The involvement of the Catholic Church during that period was a major element of the movement. Blacks and whites marching arm in arm to demand an end to segregation was the norm. Catholic priests were visible at every demonstration.

Somehow, it seems that the traditionalist movement in the church has so highlighted the sacredness of the clergy that priests have found themselves back in the sacristy. We have lost the social activism of the '60s when the reality is that there is little reason to consider the priesthood a bastion of the sacred. Our clergy needs to be out there in the streets more now than perhaps any time in our history.

I have to add another note to this blog post. On Sunday, our pastor did acknowledge the problems in Charlottesville and talked about how we had to show Christian love to those who were different. I was pleased that he made this effort. It was still weak. He seemed to send mixed messages. He said this had nothing to do with politics. He mentioned white supremacy but didn't mention Nazis. The first part of his message seemed to echo some of the anti-Semitism found in the Scriptures.

I know I live in an area that supports Trump, and the pastor felt he needed to be careful. Yet, I also know clergy were often severely criticized by their parishioners in the '60s, but they held fast to doing what they were convinced was the right thing to do.

Opinion | Catholic Church needs to be out there resisting bigotry