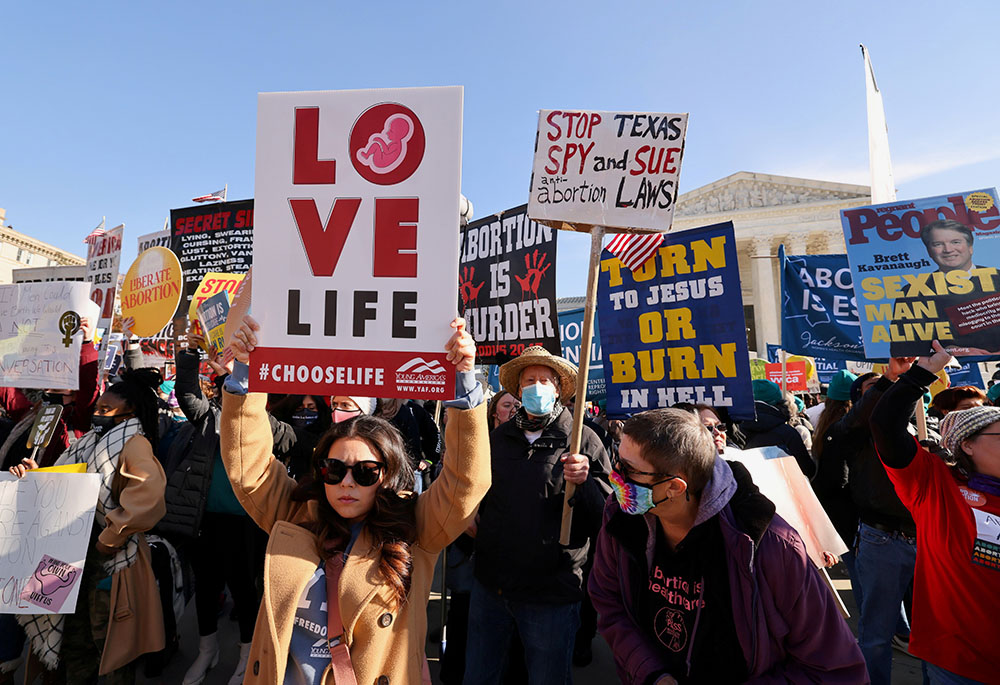 Demonstrators are seen outside the Supreme Court Dec. 1, 2021, ahead of oral arguments in Dobbs v. Jackson Women's Health, a case involving Mississippi's law banning most abortions after 15 weeks. (CNS/Reuters/Evelyn Hockstein)

As the Supreme Court weighs a case that could overturn the landmark Roe v. Wade decision that legalized abortion in 1973, Republican state lawmakers across the country are introducing a flurry of legislation that would impose punitive measures against women and enact some of the most stringent restrictions on abortion in the nation's history. While several of these bills are unlikely to pass, they send an intimidating message to women, shift the terms of debate over reproductive access further right, and raise questions about what it really means to be "pro-life."

As someone who has long been frustrated with the abortion culture wars, I was curious about how Catholic moral theologians, Catholic health care ethicists and Catholic women who view themselves as pro-life think about these more extreme anti-abortion restrictions now making headlines. Their answers provide a helpful reminder that while church teaching clearly opposes abortion, the Catholic moral tradition also offers a set of sophisticated tools for evaluating what laws and policies respect or undermine life and dignity in ways that can't be reduced to simple bumper sticker slogans or outrage tweets.

Before I share their perspectives, here are a few examples of far-right legislative proposals that have been floated at a time when most legal analysts predict that a conservative majority on the Supreme Court is poised to dismantle Roe.

In Texas, where a bill signed into law in September already bans abortions as early as six weeks after pregnancy and allows anyone to sue clinics, doctors, nurses and people who drive a woman to get an abortion, a GOP lawmaker is attempting to make abortion punishable by the death penalty. 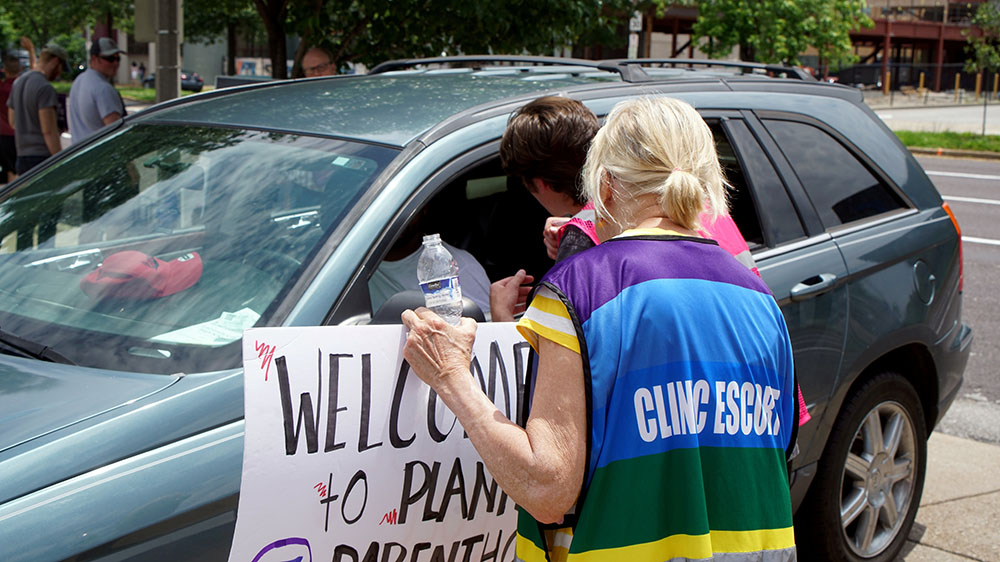 A Planned Parenthood escort advises a pro-life advocate to not stop cars coming into the organization's facility in St. Louis June 4, 2019. In Missouri, a current bill allows private citizens to sue anyone who helps a person leave the state to get an abortion. Another proposal would make it illegal to end a pregnancy even in the case of an ectopic pregnancy. (CNS/Reuters/Lawrence Bryant)

Earlier this month, Tennessee lawmakers introduced anti-abortion legislation, modeled on the Texas law, that under its provisions would permit a rapist's family member to sue an abortion provider to stop a woman from terminating her pregnancy.

And in Missouri, a bill allows private citizens to sue anyone who helps a person leave the state in order to get an abortion. Another proposal in the state would make it illegal to end a pregnancy even in the case of an ectopic pregnancy, when a fertilized egg is implanted outside the uterus. Ectopic pregnancies are not viable and women are at high risk of dying if not addressed.

When James Bretzke, a Jesuit priest and professor of theology at John Carroll University in Cleveland, recently tweeted (in response to the Missouri bill) that Catholic health care ethics has long allowed for an ectopic pregnancy to be terminated to save the life of the mother, he found that some knee-jerk critical responses highlighted what he called "the problem of moral absolutism" when it comes to life issues.

"Many of these legislative proposals are ultimately going to hurt women," Bretzke told me. "We have to go back to Thomas Aquinas in his treatment of human life and be careful in formulating just laws. Human laws are almost always imperfect because they are incomplete and deal with circumstances that lawmakers don't foresee. Aquinas reminds us that human laws should be governed by prudence and aimed at the common good."

Bretzke points to the stark language often used by Pope John Paul II, who spoke about a "culture of life" pitted against a "culture of death," as an unhelpfully simplistic way to evaluate the range of complex issues that always surround pregnancy and abortion. A generation of conservative U.S. bishops appointed by the late pope, he noted, have embraced that apocalyptic framing.

Bretzke thinks the hierarchy has put a disproportionate amount of energy into making abortion illegal and launching campaigns against pro-choice Catholic politicians rather than working to address the root causes of why women have abortions, which he views as critical to shaping a culture where pregnant women and children are supported.

"I'm against abortion and think it's a tragedy, but using the principle of prudence I don't think the best approach is criminalizing abortion," said Bretzke, the author of A Morally Complex World: Engaging Contemporary Moral Theology.

If Roe is overturned, Bretzke hopes that more people will see abortion in the wider context of poverty and inequality in health care rather than a battle in the culture war or a wedge issue to divide voters in elections.

M. Therese Lysaught, a professor at the Neiswanger Institute for Bioethics and Health Care Leadership and the Institute for Pastoral Studies at Loyola University Chicago, told me she is frustrated by how the most extreme voices dominate public debates on abortion.

'It's an idolatry of a particular issue and agenda. Once you turn something into an idol, you sacrifice everything to it: your tradition, your faith, your well-being and other people's lives.'

"My sense is many of the vocal pro-life groups supporting these laws and whose voices get amplified on Twitter don't really understand the science and they don't understand the Catholic moral tradition," she said. "The culture wars have distorted the Catholic tradition. The tradition has been weaponized to achieve certain ends."

"Those who claim to be pro-life are acting in ways that are violent and vicious and dehumanizing toward women," she added. "They are turning neighbor against neighbor. This is what happens when one issue becomes preeminent. It's an idolatry of a particular issue and agenda. Once you turn something into an idol, you sacrifice everything to it: your tradition, your faith, your well-being and other people's lives."

M.T. Dávila, a visiting associate professor of practice at Merrimack College and a past president of the Academy of Catholic Hispanic Theologians of the United States, argues that something fundamental is often lost in Catholic discussions of abortion.

"Human dignity in Catholic social teaching often seems not to include respect for the autonomy and personhood of women," she said. "We have failed to build in the Catholic and pro-life tradition a robust understanding of the personhood of women. It's a failure of thought and imagination."

'You can be pro-life and also highlight the way these measures are very clearly anti-woman.'

Dávila, who in our conversation described herself as a "pro-life ethicist," was blunt in assessing the escalation of severe restrictions on abortion in a growing number of states. "You can be pro-life and also highlight the way these measures are very clearly anti-woman," she said.

Dávila finds it telling that none of the most restrictive anti-abortion legislation includes social supports for women and children such as child care funding or prenatal and postnatal health care.

In fact, conservative legislators in Mississippi — a state with a law banning abortion after 15 weeks of pregnancy that is now being reviewed in the Supreme Court case Dobbs v. Jackson Women's Health Organization — have for the second year in a row ended an extension of postpartum Medicaid benefits, making it likely that many low-income women will lose health insurance benefits only two months after giving birth.

"The life issue goes beyond the womb, and especially in Black and Latinx communities it's essential to uphold the kinds of community support that promote safe and healthy families," Dávila said. "None of these bills have these accompanying measures." 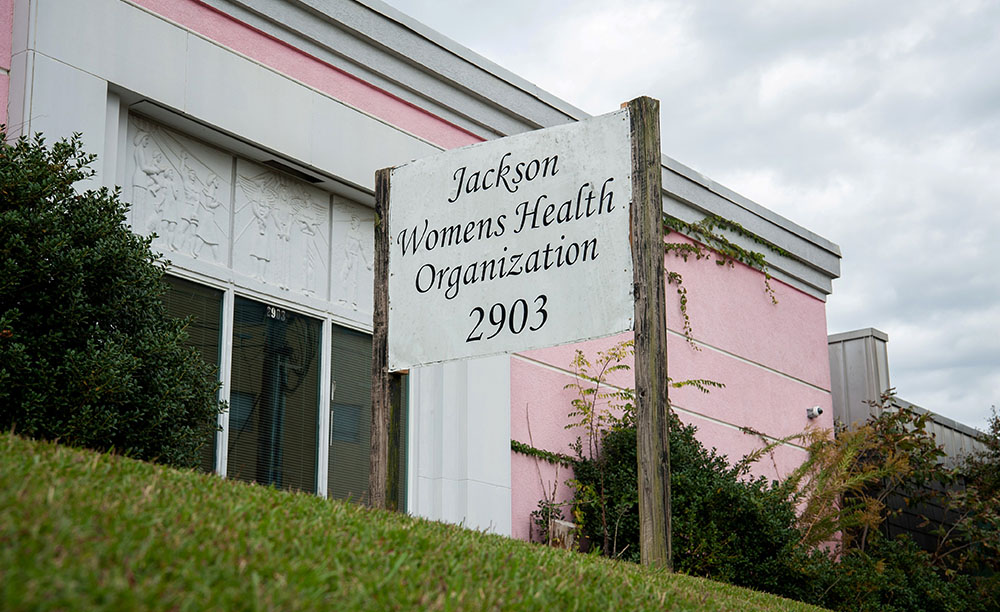 Cathleen Kaveny, a Boston College scholar who focuses on the relationship of law, religion and morality, raised a clarifying question during our conversation. "How do we balance the legitimate autonomy and privacy rights of women against the interest of the unborn life? There is a lot of practicality that goes into making good laws and when you do that in a nation with different views on abortion, it's hard to employ a prophetic approach," Kaveny observed.

Her 2016 book Prophecy Without Contempt: An Ethics of Religious Discourse in the Public Square examined how the language we choose to frame and debate issues matters in a pluralistic society. "The people who have the loudest voices on abortion right now are conservatives," Kaveny said. "People who have a more nuanced view don't really have a platform to make the case without getting shot down by both sides."

Mollie Wilson O'Reilly, a columnist and editor-at-large at Commonweal magazine, explores those complexities and nuances Kaveny rightly notes are often missing from our debates about abortion. In a powerful recent piece for the magazine, "When Abortion Isn't Abortion," O'Reilly offers a personal reflection on her own difficult pregnancies and miscarriages, along with a broader testimony about why she has grown disillusioned with the anti-abortion movement.

'When the focus is only on protecting innocent babies, the very real risks to women that any pregnancy involves get left out of the conversation or treated as a distraction.'

"I have learned over the course of six pregnancies and four births how inadequate pro-life rhetoric can be, and how lonely it is to find yourself in a place beyond the reach of slogans like 'Choose life!'," O'Reilly wrote. "The awful irony of restrictions on abortion is the way they put up barriers to basic health care, barriers that can be dangerous for women whose experience of pregnancy is not a smooth path to motherhood."

I asked O'Reilly why she wrote about such a searing personal issue and what she hoped people would take away from her essay. Her answer provides hard-earned practical wisdom for those of us who want to listen more, go deeper, and move beyond the "pro-choice/pro-life" binaries that limit more than they illuminate.

"In the past, I had mostly avoided writing about abortion because I despaired of adding anything to the conversation, which seems so polarized and so hostile to nuance," O'Reilly told me.

"But my experience of being hospitalized after a miscarriage, which happened just as the pro-life movement was having unprecedented success in restricting access to reproductive care, forced me to acknowledge how simplistic and inadequate the church's view of abortion policy is," she said. "When the focus is only on protecting innocent babies, the very real risks to women that any pregnancy involves get left out of the conversation or treated as a distraction. I see that single-issue advocacy as deeply compromising to the church's broader witness."

"Just because a law restricts abortion doesn't mean it's something Catholics must or even should support. ... I am mostly hoping that Catholics who want to apply their pro-life principles in a thoughtful way will be encouraged to keep thinking for themselves about what that means in terms of politics, and feel more comfortable pushing back against the expectation that they will fall in line and stop asking questions."

A version of this story appeared in the April 15-28, 2022 print issue under the headline: Catholic tradition more nuanced than anti-abortion slogans or extreme bills.