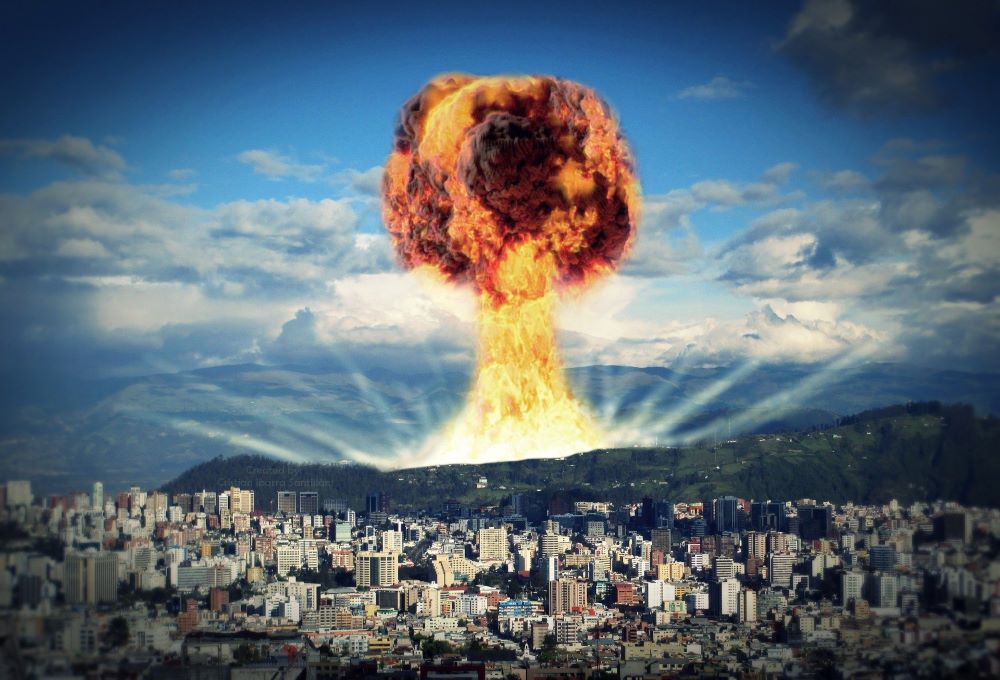 During his historic visit to Hiroshima and Nagasaki in 2019, Pope Francis declared that "the use of atomic energy for purposes of war is immoral, just as the possessing of nuclear weapons is immoral."

The pontiff said the world "must never grow weary of working to support the principal international legal instruments of nuclear disarmament and non-proliferation, including the Treaty on the Prohibition of Nuclear Weapons."

Francis' pronouncement was clear: The very possession of nuclear weapons is immoral! Therefore, if it is wrong for followers of Jesus to possess nuclear weapons, then it is equally wrong to build and modernize them, let alone use them.

The Biden administration is requesting $43 billion for nuclear weapons in its budget for fiscal year 2022. During this Aug. 6-9 period commemorating the 76th anniversary of the U.S. nuclear bombings of Hiroshima and Nagasaki, should not all Catholics, including President Joe Biden and all other Catholic politicians, be following the lead of Francis in advocating for total nuclear disarmament?

Instead of advocating for this exorbitant nuclear expenditure — a continuation of the last two presidents' projected $1.7 trillion upgrade of the U.S. nuclear arsenal that will span several decades — Biden should provide bold leadership to bring about total nuclear abolition and redirect all nuclear and other military expenditures to meet urgent human needs.

In his 1976 World Day of Peace Message, Pope Paul VI described the atomic bombings of Japan as "a butchery of untold magnitude." During the ceremony that awarded the 2017 Nobel Peace Prize to the International Campaign to Abolish Nuclear Weapons (ICAN), Setsuko Thurlow, Hiroshima survivor and ICAN member, spoke these words in her acceptance speech:

I speak as a member of the family of hibakusha — those of us who, by some miraculous chance, survived the atomic bombings of Hiroshima and Nagasaki. For more than seven decades, we have worked for the total abolition of nuclear weapons. ... We were not content to be victims. We refused to wait for an immediate fiery end or the slow poisoning of our world. We refused to sit idly in terror as the so-called great powers took us past nuclear dusk and brought us recklessly close to nuclear midnight. We rose up. We shared our stories of survival. We said: humanity and nuclear weapons cannot coexist.

Today, I want you to feel in this hall the presence of all those who perished in Hiroshima and Nagasaki. I want you to feel, above and around us, a great cloud of a quarter-million. ...souls. Each person had a name. Each person was loved by someone. Let us ensure that their deaths were not in vain. ... The development of nuclear weapons signifies not a country's elevation to greatness, but its descent to the darkest depths of depravity. These weapons are not a necessary evil; they are the ultimate evil. 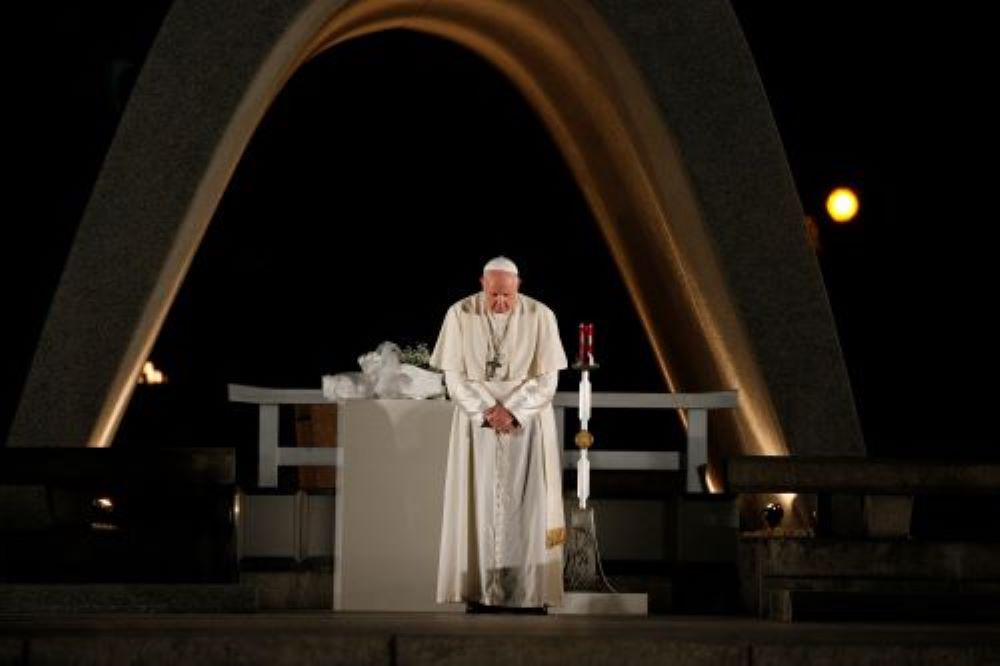 Pope Francis participates in a moment of silence at the Hiroshima Peace Memorial in Japan in 2019. "The use of atomic energy for purposes of war is immoral, just as the possessing of nuclear weapons is immoral," the pope said during that visit. (CNS/Paul Haring)

In the U.S., a nation that has legally sanctioned the use of nuclear weapons and relies on them for its ultimate security, what would Jesus have us do? Clearly, Jesus teaches that we must place our trust in God, not in the nuclear idol, for our true security. He calls us to disarm our hearts of fear, hate, racism and greed. He instructs us to forever put away the sword, love unconditionally and renounce all killing.

Due to the existential threats posed by both nuclear weapons and the climate crisis, the Bulletin of the Atomic Scientists has now turned its Doomsday Clock to 100 seconds before midnight. The U.S. possesses nearly 5,500 nuclear weapons, many of which are on hair-trigger alert. The U.S. refuses to adopt a no-first use policy.

With the very future of human survival and our planet's existence at stake, how can we avert global catastrophe and make disarmament a reality for our time? First and foremost, we must have the faith, courage, and will to believe that total nuclear disarmament can occur. If we are to take seriously the magnitude of the nuclear threat and the admonitions of Francis and the hibakusha, we must risk taking action that is commensurate with the colossal threat we face.

Can followers of Jesus be employed in nuclear weapons-related work? Christians who work to produce and upgrade nuclear weapons, or who are otherwise involved in their potential use today face a serious faith and moral dilemma. The following insights from Catholic peacemakers serve to counsel us on this matter.

Jesuit Fr. Richard McSorley stated: "It's a sin to build a nuclear weapon. We cannot seriously imagine Jesus pushing the button to launch a nuclear bomb, or registering for the draft, or wearing the uniform of any national state, or paying taxes for nuclear weapons, or working in a plant that manufactures weapons of death."

The late Bishop Leroy Matthiesen of Amarillo, Texas, told the Catholics in his diocese who worked at the nearby Pantex nuclear weapons plant: "In the name of the God of peace, quit your jobs." In making this appeal, he said he would offer financial assistance to any defense workers who would quit their jobs. 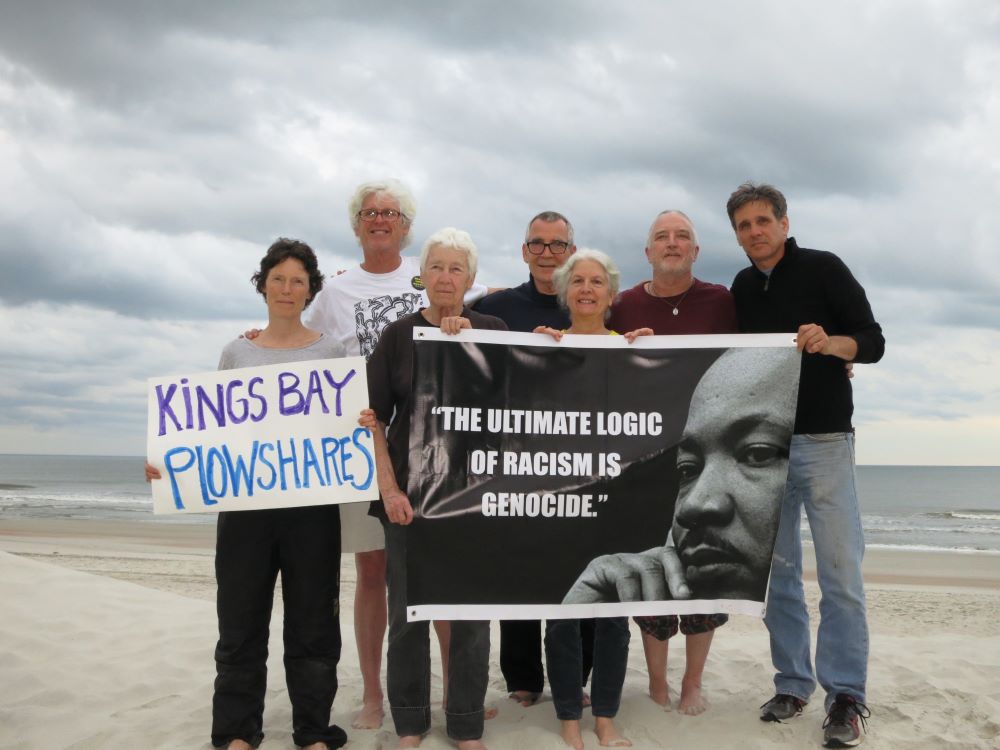 Seven Catholics were convicted for participating in the 2018 Kings Bay Plowshares action at the Naval Submarine Base in Kings Bay, Georgia, to protest nuclear weapons. It was among about 100 disarmament actions since 1980 in which activists have symbolically beaten swords into plowshares. (CNS/courtesy Kings Bay Plowshares)

The nuclear challenge before us is great but not insurmountable, for with God, and people acting on their faith convictions, all things are possible. History bears out this truth. Drawing on the rich biblical tradition of nonviolence and the many examples of nonviolent resistance in human history, Plowshares activists have been inspired to carry out over 100 disarmament actions since 1980, whereby the nuclear swords of our time have symbolically been beaten into plowshares (Isaiah 2:4 and Micah 4:3).

The most recent action, the Kings Bay Plowshares 7, took place on April 4, 2018, the 50th anniversary of the assassination of Dr. Martin Luther King Jr., at the Naval Submarine Base Kings Bay in St. Mary’s, Georgia. They declared in their action statement: "Nuclear weapons eviscerate the rule of law, enforce white supremacy, perpetuate endless war and environmental destruction, and ensure impunity for all manner of crimes against humanity."

In October 2019, the activists were tried and convicted by a jury in U.S. District Court in Brunswick, Georgia. All seven have served or are serving prison terms ranging from 8 months to 3 years.

The nuclear challenge before us is great but not insurmountable, for with God, and people acting on their faith convictions, all things are possible.

As one who has participated in two Plowshares actions and other peace actions, I, along with many others, believe that if people have the faith to believe that disarmament is possible, and act on that faith, the abolition of nuclear weapons can occur.

The U.S. bishops and all churches have a crucial role to play in following Francis' lead in bringing about nuclear abolition.

What if the bishops called for the conversion of arms industries to nonmilitary production, while advocating for full and just protection of workers' rights during the transition process? What if the church provided material resources for those who quit their jobs for reasons of conscience?

What if leadership in all Christian denominations called on believers in the nuclear chain of command to refuse orders to use nuclear weapons, and for all Christians to publicly support those who do so? What if the churches demanded, too, that the U.S. government ratify the UN Treaty on the Prohibition of Nuclear Weapons, which now makes nuclear weapons illegal under international law?

These efforts would go a long way to help create the climate necessary to bring about real disarmament.

Hiroshima-Nagasaki commemoration actions worldwide Aug. 6-9 will call for nuclear abolition. "In the Presence of All Who Perished: Remembrance in the Age of the Ban Treaty" is the theme for actions coordinated by the U.S. Days of Action Working Group.

The purpose is twofold: to note that the U.N. treaty has shifted the conversation about nuclear weapons from military and policy considerations to the humanitarian and environmental impacts of nuclear weapons; and to elevate the voices of those who have witnessed the destructive power of nuclear weapons.

Now is the time to join together and act with people worldwide working for nonviolent social transformation, peace and justice.

As Dr. King famously said in his 1967 speech on Vietnam: "Our only hope today lies in our ability to recapture the revolutionary spirit and go out into a sometimes hostile world declaring eternal hostility to poverty, racism, and militarism."

If the human family and earth, our common home, are to survive, if our children are to have a future, we need to recapture the hope and revolutionary spirit that Dr. King spoke of. Moreover, we need to commit our lives to the commandment of gospel nonviolence as we join with others seeking to create the Beloved Community, thereby making God's reign of love, peace, and justice a reality for our world.