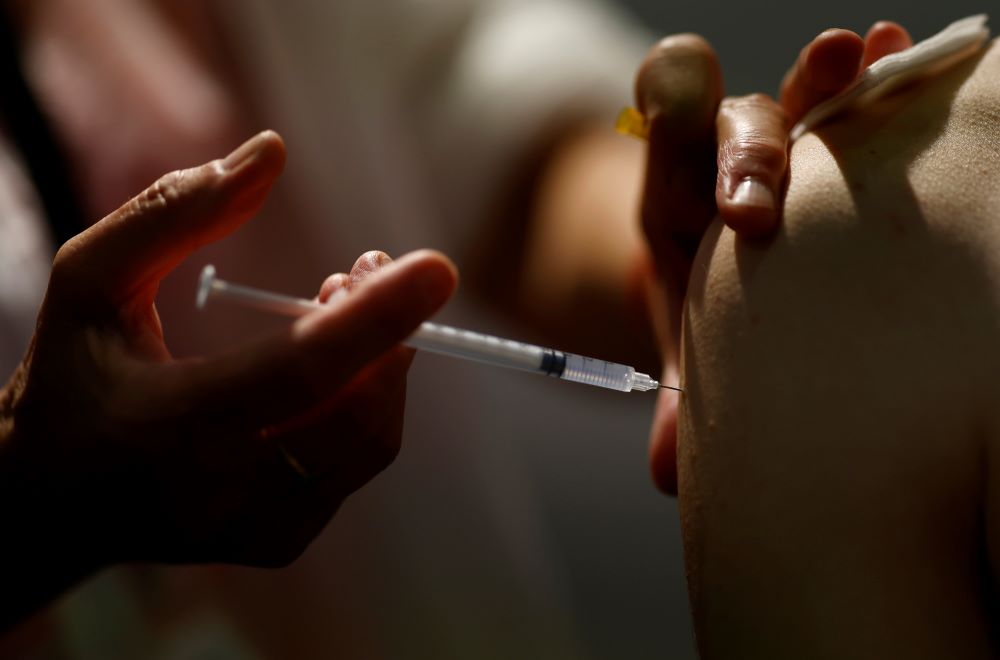 A medical worker administers a dose of the Pfizer BioNTech coronavirus vaccine Sept. 14 at a vaccination center in Nantes, France. (CNS/Reuters/Stephane Mahe)

Last week, 1,150,284 Americans were newly diagnosed with COVID-19, more than 100,000 people were hospitalized and 10,386 people died from it. By the time you read this, at least another 10,000 people will have died from it — and probably more, since COVID-19 infections, hospitalizations and deaths are growing exponentially as the fourth wave of the pandemic surges. So it will continue each week through September, with COVID-19 potentially becoming again the leading cause of death in the U.S., as it was in January 2021.

Data from the end of August show that the unvaccinated account for 94-99% of current COVID-19 deaths. In other words: Almost all these deaths could have been prevented.

Catholics, for the most part, have shown their commitment to life on this issue. A recent PPRI poll found that 80% of U.S. Catholics support vaccination, with only 7% as "vaccine refusers." In fact, Catholics appear to be ahead of most other faith traditions in stepping up, being pro-life and protecting the common good.

Catholic hospitals and universities, likewise, are witnessing the church's commitments to life, healing and the common good by requiring that employees and students who wish to return to offices and campuses and participate in the goods of common life be vaccinated. Educational institutions and some professional bodies have had vaccine requirements for decades. They are nothing new. And the church has never opposed them.

Yet in contradiction to the authoritative guidance repeatedly provided by Pope Francis, the Holy See and the U.S. Conference of Catholic Bishops that all the COVID-19 vaccines are morally acceptable and that Catholics have a "duty," "responsibility" or "obligation" to be vaccinated, some Catholic voices continue to suggest that the vaccines might somehow be "morally compromised" and are actively supporting Catholics in requesting "religious" exemptions from vaccine requirements on the basis of Catholic teaching on the primacy of conscience.

One organization even crafted a "religious exemption template letter" that has been promoted by a small number of bishops, advertised in parish bulletins and distributed through social media networks. This position not only distorts Catholic teaching on conscience. It also ignores most of the necessary components of Catholic moral discernment — our liturgical identity, charity and the virtues, the consensus position of magisterial authority, Catholic social teaching and even principles of Catholic bioethics.

And this template is being used. One of my colleagues who works in mission integration at a Catholic health system told me that his system alone has processed over 1,000 employee requests for religious exemptions just for the state of Michigan. Roughly 65% of these have come from Catholics, many armed with some version of the template.

As Tobias Winright and Jason Eberl, both professors of health care ethics, have helpfully argued, the suggestion that there are religious or moral grounds for COVID-19 vaccine exemptions for Catholics is false. The Catholic tradition provides a rich, complex and nuanced understanding of conscience. These religious vaccine exemptions statements distort this tradition by presenting only a partial account. Most of them simply string together cherry-picked sentences taken out of context from random church documents rather than presenting a careful, thorough account of Catholic teaching.

For example, some of the exemption statements cite the Second Vatican Council's words from Gaudium et Spes, that conscience is our "most secret core and sanctuary." They fail to include the council's next statement: "In fidelity to conscience, Christians are joined with the rest of men in the search for truth, and for the genuine solution to the numerous problems which arise in the life of individuals from social relationships."

In other words, conscience always unites us with others and is always directed toward the common good.

Similarly, they cite the council's phrase that conscience is the "law written by God" on our hearts but fail to continue that this "law … fulfilled by love of God and neighbor." In other words, for the council, the content of this law is the person of Christ — it is the "law" of self-emptying love for the good of others, the "law" of charity.

But don't take my word for it: Anyone can — and should — read it for themselves (scroll down to paragraph 16).

Perhaps they missed this because they appear to cite only the Catechism of the Catholic Church.

But they even distort what the catechism says. They fail include the catechism's counsel that conscience must be formed in respectful dialogue with the church's authoritative magisterium, through prayer, study, conversation and the grace of the sacraments.

And while citing the catechism's affirmation that a person "must always obey the certain judgement of [their] conscience" even when those judgments are in error, they again fail to present the rest of the teaching: that culpable error can stem from ignorance when one " 'takes little trouble to find out what is true or good,' " as well as by an 'assertion of a mistaken notion of autonomy of conscience, rejection of the Church’s authority and her teaching, and lack of … charity."

But again, don't take my word for it: Anyone can — and should — read it for themselves.

Catholic figures championing religious exemptions commit all these culpable errors. They fail to engage in the critically important first step for any moral analysis of appreciating and understanding the basic facts of the case — here the science of epidemiology and public health and the magnitude. They fail in understanding the scope of this pandemic as it assaults human life and human well-being and flourishing in so many dimensions, especially the lives and flourishing of people who are poor and marginalized across the globe.

And, contra the catechism, they assert conscience as an absolute, as Winright and Eberl helpfully noted. No other principles, no other considerations, no other foundational theological claims are offered. In fact, those seeking religious exemptions aren't required to give reasons — feelings of fear, disgust, moral repugnance or moral intuitions seem to be sufficient. Conscience, here, is simply a religious word for the supremacy of autonomy.

Those seeking religious exemptions aren't required to give reasons — feelings of fear, disgust, moral repugnance or moral intuitions seem to be sufficient. Conscience, here, is simply a religious word for the supremacy of autonomy.

This absolute authority of conscience, more pointedly, is empowered to reject the church's authority. Apart from two sentences taken out of context from the December 2020 statement of the Congregation of the Doctrine of the Faith, almost none of the religious exemption missives even mention, let alone thoroughly present, the many statements issued by the various offices of the Holy See and the USCCB on the COVID-19 vaccines. They more frequently cite the National Catholics Bioethics Center or the Charlotte Lozier Institute.

Even more troubling, they appear to specifically encourage Catholics to reject the church's authority. For example, the "Statement of the Catholic Bishops of Wisconsin on COVID-19 Vaccination and the Protection of Conscience" states: "A well-formed conscience stands not solely upon ecclesiastical authority, but also on the law of God written in an individual's heart. Therefore, a human being must always obey the certain judgement of his or her conscience."

More tellingly, only one statement I have seen supporting COVID-19 vaccine exemptions for Catholics mentions the Holy Father. While this seems like an attempt to delegitimize his authority by silence, the religious exemption template letter is more direct, stating that "Conscience is the aboriginal Vicar of Christ." The assertion of an individual's conscience over against the leadership of Pope Francis — whose title is the vicar of Christ — could not be more explicit. This is a distortion of the meaning intended by that sentence by the authors of the catechism.

Those who have dismissed Pope Francis's guidance on the COVID-19 vaccines as merely his "personal judgements" or "personal opinion" should be reminded of the church's position in Lumen Gentium, which notes in no. 25 that that the Holy Father exercises an "authentic magisterium … even when he is not speaking ex cathedra; that is, [regard] must be shown in such a way that his supreme magisterium is acknowledged with reverence, the judgments made by him are sincerely adhered to, according to his manifest mind and will. His mind and will in the matter may be known either from the character of the documents, from his frequent repetition of the same doctrine, or from his manner of speaking.”

In committing these culpable errors, Catholic figures championing religious exemption are actively assisting others in mal-forming their consciences. They are actively assisting people to be indifferent to the lives of others and to put others' lives at risk — contributing to and perhaps even causing others' deaths. These are sins against charity. This is the Catholic definition of scandal.

Were they truly interested in protecting conscience, these figures would have instead developed a robust and thorough process to assist others in conscience formation. Over the past months, I have been contacted by a number of people dismayed by their Catholic friends and family members who are refusing vaccination — some of whom have now died. For these and my colleagues who work in Catholic health care, I have developed an alternative template to use with Catholics who request religious exemptions from COVID-19 vaccine requirements. I hope it serves as a vehicle for dialogue and for helping employees and others to form their consciences.

This template outlines what a Catholic process of conscience formation and moral discernment should look like. Any authentic Catholic discernment begins with the sacramental grounding of the church. Baptized into Christ' body, all Catholics are called to contribute to and participate in the church’s work of continuing the healing mission of Jesus — one of the central activities of his life as witnessed in the Gospels. This identity is reaffirmed, renewed and deepened each week as we participate in the Eucharist. There, in the words of St. Augustine and Pope Emeritus Benedict XVI, "we become what we consume" —we become Christ's self-emptying body commissioned to go forth and be that healing love in the world.

In other words, as Pope Francis makes clear (echoing Thomas Aquinas), the center of Catholic moral discernment and the shape of the whole Christian life is the virtue of charity — the virtue of self-gift or self-emptying love for the good of others. This is because self-gift, self-emptying love for the good of others, is who we understand God to be, as Benedict XVI noted in Deus Caritas Est and Caritas in Veritate. Charity, sacramentally understood, is always the framework within which all other sources of Catholic moral analysis must be interpreted and applied. It is for this reason that the Holy Father has stated again and again that getting vaccinated is "an act of love."

It is within this framework — and only within this framework — that an authentic Catholic moral discernment then moves to tools of the Catholic tradition — the guidance of magisterial authorities and principles like that of moral cooperation or ordinary treatment. And intellectual virtue requires that the presentation of this guidance and principles must be complete and accurate. Troublingly, the materials championing vaccine exemptions distort not only Catholic teaching on conscience but they invent — or, more charitably, present in a misleading fashion —basic principles of Catholic bioethics.

Rather than requesting exemptions, Catholics should be at the forefront of receiving and promoting COVID-19 vaccination for all who are medically eligible. Gladly, for the most part, they are. This simple act of who we are as missionary disciples is grounded in our sacramental identity and affirmed by authoritative magisterial guidance — which together provide the proper and necessary framework for interpreting and applying the principles of Catholic medical ethics and conscience.