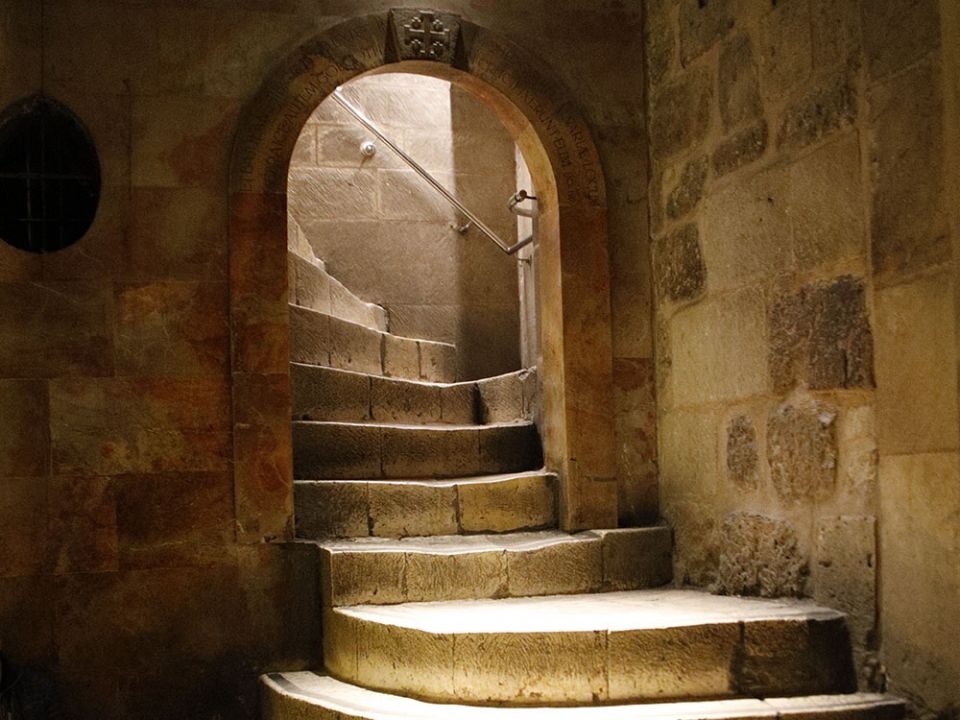 As I listened to Jesuit Fr. James McDermott read the Passion from the Gospel of Mark this Palm Sunday, I closed my eyes and my imagination took me back to late December 2019, when I had the opportunity to visit Jerusalem and parts of Israel.

I was there to be a member of the interreligious jury for the Jerusalem Jewish Film Festival. We formed a small jury, including Benjamin Freidenberg, a Jewish film professor from Jerusalem, and Kamal Hachkar, a Muslim filmmaker from Marrakesh, Morocco.

My new Muslim friend and colleague, Kamal, came to Christmas midnight Mass with me; it was the first time he had ever been to a Catholic Mass. A Muslim driver for the festival (I will call him Omar) was also a tour guide; he took me one morning to visit a graduate school friend near Bethlehem and, on my final day in Israel, just before I came home, took me on a tour of the Jordan Valley and Nazareth.

I had Shabbos dinner with dear friends from Los Angeles, Rabbi Yitzchok Adlerstein and his wife, while I was there, too. The rabbi took me to visit the professor and author Yossi Klein Halevi (Letters to My Palestinian Neighbor, 2018) on Christmas Day, where we talked about the futures of Israel and Palestine.

I talked with Omar about what it would take for the Palestinians and Jewish people to make peace. He told me, "We don't want war. Leaders do. We the normal people want to raise our children in peace. We only want to be part of the life [of Israel.]" 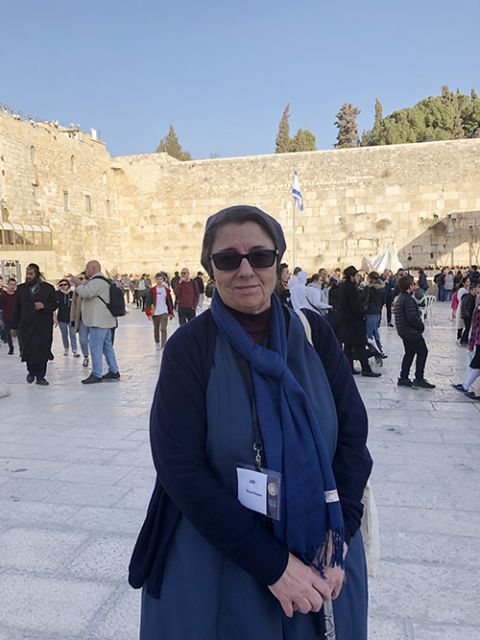 The mornings of the festival were mostly free as the film screenings didn't start until later in the afternoon. For one morning, the festival planned a tour of the Old City directly across from the cinematheque on Hebron Street that was hosting the festival.

Only two other ladies plus me met at the theater and walked down a steep hill, crossed a main road (Route 60) and then began ascending to the very busy Jaffa Gate. When I first realized we were walking and not taking a taxi, I was filled with a little dread. I have had multiple sclerosis since 1997 and use a cane for balance. I knew that walking across this terrain was not going to be easy.

This is when the film festival turned into a pilgrimage. The festival representative who was with us, I will call her Sarah, asked me if I would be OK. I said yes. I told myself this was a once-in-a-lifetime opportunity; you have to try.

By the time we arrived at the Jaffa Gate, my legs were seriously aching. There we met our guide, I will call her Judith, a former archeologist who had decided to change careers. She had left her university post and studied to become a certified guide.

Judith is Jewish, as were the other ladies in our group, but her thoughtful understanding of what was important to me as a Christian, and the depth of her knowledge, made the tour so very rich. And the first thing she did was take us to visit an ecumenical church very near the gate, so we could rest a bit and have a coffee.

We then visited the Armenian Quarter (only what tourists are permitted to see without an invitation from someone from inside the Armenian community) and the Christian Quarter. Judith led us through uneven but picturesque mazes of small streets, some filled with open-face shops selling all kinds of items of interest to the many pilgrims and tourists, and some streets that were more hidden.

One of the ladies always took my arm, as the cobblestone streets are uneven and steep in some places. Judith told us stories that embraced history and facts to make our walking interesting. She knew people (as well as the location of all the clean restrooms). She got us permission to enter one Greek Orthodox monastery church, usually closed, where a silent nun dressed all in black, watched us carefully to make sure we didn't take photos of the incredibly beautiful place of worship.

When we neared the Church of the Holy Sepulcher, Judith explained much about the history of the basilica over the ages. It houses the last four stations of the cross (or five, depending on who you ask), including Golgotha or Calvary, the site of the crucifixion, and Jesus' burial site: the place of Jesus' resurrection. As we entered through the door under the famous "immovable ladder" we turned to the steps leading to Calvary.

The steps to Calvary are high and the stairway steep. As two of the ladies proceeded to climb the stairs, I held back, knowing I could not make it. I know my limits. I told Judith and Sarah to go ahead, I would wait for them. Judith looked at me, surprised. Sarah looked at me and said, "Oh no. You cannot have come all this way and not go up to Calvary. We will walk with you; we will help you." So, without even waiting for me to agree, these two Jewish women each took an arm and helped me climb Mount Calvary.

I was, and remain, profoundly moved by their spontaneous act of kindness.

When we reached the top, the place where it is believed that Jesus was crucified, my companions left me there to pray, to wonder, to contemplate the significance of this holy place. I descended after a few moments because there was a steady line of people patiently waiting their turn to walk in the footsteps of Jesus to the site of his crucifixion.

We proceeded to the Jewish Quarter and the Western Wall. It is the remainder of a support wall for the expansion of the second Temple, built in 20 B.C. by King Herod the Great. The Romans destroyed most of the Temple in A.D. 70. It is the holiest site in Judaism because the foundation stone of the original Temple is beneath the Temple Mount.

It is a place where hundreds visit daily, praying and placing prayer intentions written on bits of paper into the wall. It is the only part of the Temple Mount where Jews are allowed to pray, as the remainder of it is administered by Jordan as an Islamic holy site with three mosques, most notably the Dome of the Rock, and is within the Muslim Quarter. Unfortunately, due to time limits, we were not able to visit the Muslim Quarter. 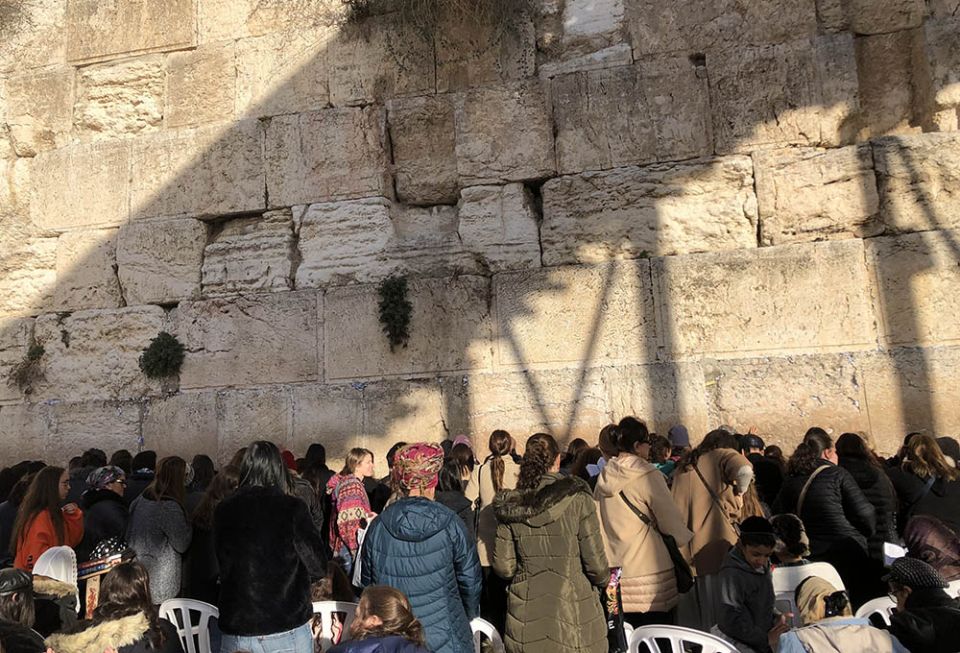 It was the memory of seeing the expanse of the former Temple of Jesus' times, the excavations below revealing ancient streets where Jesus may have walked, and praying at the Western Wall that connected with me during the Gospel reading on Palm Sunday.

My idea of the inner Temple comes from the movies, true, but as I closed my eyes, I thought of everything the Gospels say happened at the moment Jesus died, and the rending of the sanctuary veil struck me. What does it mean to merit mention in the Gospel? I had to look it up.

According to the historian Josephus, the veil or curtain, meant to separate people from the Ark of the Covenant or the presence of God, was 80 feet high and 4 inches thick. By the time of Christ, however, the ark had been lost since about the time of King Josiah (640-610 B.C.). Thus, according to Christian theology, with the death of Jesus, the curtain would no longer be needed because Jesus would forgive people their sins and make them holy. With the resurrection of Jesus, a new temple, the church, will replace the Temple of old.

Theologically and spiritually, this moment in the Gospel has literal and symbolic meaning for Christians. But the memory of my Jewish companions, women who still await the coming of the Messiah and who historically and religiously have issues with the image of the crucified Christ, helped mend a symbolic curtain of division that day. My imagination and memory tell me, through a unifying act of love and grace for a sister they barely knew, they have helped heal the world.

Unity, charity and gratitude are the themes that dominate my memory of my pilgrimage to Israel. They are the themes of my prayer this Holy Week and Easter, too.

The first two words I learned when I landed at the airport in Tel Aviv were toda and shukraan, the Hebrew and Arabic words respectively for "thank you." All these months and a pandemic later, I remember my pilgrimage to Jerusalem with deep gratitude.