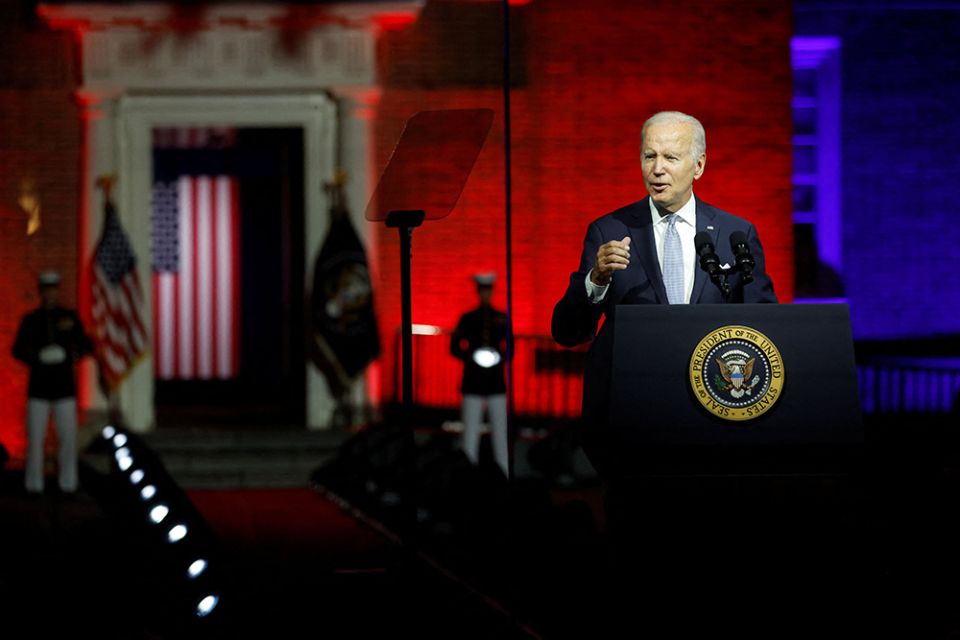 President Joe Biden delivers remarks on what he calls the "continued battle for the soul of the nation" in front of Independence Hall in Philadelphia Sept. 1. (CNS/Reuters/Jonathan Ernst)

President Joe Biden delivered a fiery speech in front of Independence Hall as Labor Day weekend began. He denounced Trumpism in the most forceful ways — "Donald Trump and the MAGA Republicans represent an extremism that threatens the very foundations of our republic" and "MAGA Republicans do not respect the Constitution" — his words matching the red lighting on the great building where both our Declaration of Independence and U.S. Constitution were drafted.

The speech was also an impossible one. A president must try to unite the country, but how to unite the people around their own finest ideals and traditions when half the voters have sworn fealty to a cultlike figure for whom the rule of law is a meaningless phrase? The baby gladiators of MAGAland — J.D. Vance, Kevin McCarthy and the rest of Trump's altar boys — raised their tiny fists and denounced Biden for being divisive.

"In the inverted logic of Trumpworld, theirs is the grievance that matters," wrote Susan Glasser in The New Yorker. "They are always the wronged party. Storming the Capitol and defying the will of the voters in 2020 was totally fine. But how dare Joe Biden say such nasty things about them for doing so?"

The president felt he had to speak up. All last weekend, I wondered if there was a different way to have delivered this potent message that must be heard without adding fuel to the partisan fire, and there isn't. I would have added some rhetoric to distinguish among Trump supporters, but would it have made a difference? Maybe a prominent Republican could have delivered the speech. Where did that get Rep. Liz Cheney?

In any contest, political or otherwise, the person of good faith is always at a disadvantage if his opponent is not acting in good faith. Still, it was incumbent on the president to acknowledge that Trumpism did not fall from the sky, and that he was part of an administration that bailed out Wall Street not Main Street after the 2008 economic meltdown. The Democrats wrote off the white working class when the party leaders refused to embrace the kind of economic measures that would appeal to working-class voters. They did not want to offend the donor class.

Again, there is no moral equivalence between the parties in terms of responsibility for Trumpism, but the Democrats are not entirely blameless.

The same day the president delivered his remarks, The Washington Post's Michael Gerson came at this issue of what to do about Trumpism from a different angle. His essay asked why Christians are not filled with rage by Donald Trump. It is a more interesting question and the essay is a wonderful read.

Gerson included one graph that demonstrates why it is not enough simply to loathe the evangelicals who have embraced Trumpism:

From one perspective, the Christian embrace of populist politics is understandable. The disorienting flux of American ethical norms and the condescension of progressive elites have incited a defensive reaction among many conservative religious people — a belief that they are outsiders in their own land. They feel reviled for opposing gender ideology that seems to have arrived just yesterday, or for stating views on marriage that Barack Obama once held. They fear their values are under assault by an inexorable modernity, in the form of government, big business, media and academia.

Gerson goes on to explain why these explanations, though real, are not exculpatory. Followers of Christ should think twice when following a political leader whose values are so at odds with the Gospels.

Gerson calls for a renewed sense of Christian discipleship. "What might an outbreak of discipleship look like? It would not bring victory for one ideological side or to one policy agenda," Gerson writes. "Christ did not deliver a manifesto or provide a briefing book. He called human beings to live generously, honestly, kindly and faithfully. Following this way — which the Apostle Paul later called 'the Way' — is not primarily a political choice, but it has unavoidable public consequences."

This is so well calibrated and said. The reduction of religion to politics always corrupts both, and it is courageous of Gerson, himself a conservative evangelical, to say this.

If the Gospel is invoked merely to baptize a political agenda that meets worldly ends, we have 'taken the wrong path,' as Pope Francis says.

Leave it to Pope Francis to round out the picture. In his homily at the Mass for the beatification of Blessed Pope John Paul I, he said, "For many in those crowds might have been following Jesus because they hoped he would be a leader who could set them free from their enemies, someone who, once in power, could share that power with them, or someone who by performing miracles could make hunger and disease disappear. … If anyone follows Jesus with this kind of self-interest, he or she has taken the wrong path."

"The Lord demands a different attitude. To follow him does not mean to become part of a court or a triumphal procession, or even to receive a lifetime insurance policy," the pope continued. "On the contrary, it means 'carrying one's cross' [Luke 14:27]: shouldering, like him, one's own burdens and those of others, making one's life a gift, not a possession, spending it in imitation of his own generous and merciful love for us."

We are called "to love God and others, in Church and society, including those who do not see things as we do, to love even our enemies," Francis said.

Such discipleship will yield ethical and political values, but they are derivative. If the Gospel is invoked merely to baptize a political agenda that meets worldly ends, we have "taken the wrong path," as Francis says.

It is easy to see the way the MAGA evangelicals have done this, but the strength of our critique will require that we pose these questions to ourselves, too.

Like Biden, I hope there is time and the will to preserve the best in our democracy. Like Gerson and Francis, I think it is the corruption of Christianity that is even more worrisome.