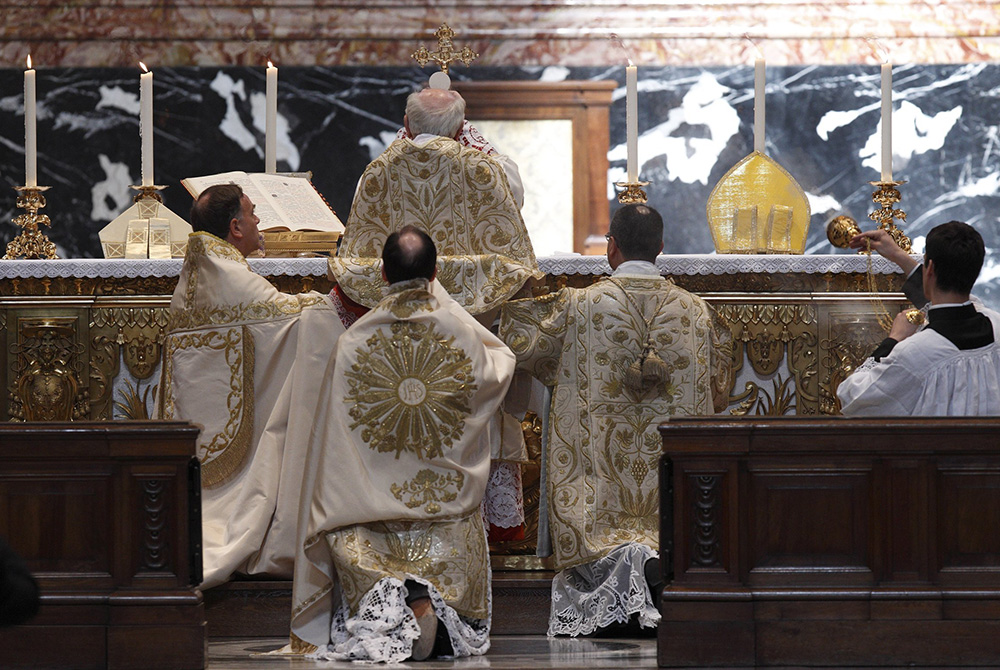 Cardinal Walter Brandmuller elevates the Eucharist during a Tridentine Mass at the Altar of the Chair in St. Peter's Basilica at the Vatican May 15, 2011. (CNS/Paul Haring)

Are millennials flocking to Latin Mass parishes? According to traditional-leaning Catholics, they are. Sick of felt banners and guitar Masses, young people are supposedly drawn to churches where the liturgy is beautiful, women wear chapel veils and everyone kneels reverently at the altar rail for Communion. And traditionalist parishes, we are assured, are thriving.

But even if some are drawn to traditionalist parishes and communities, others are leaving them. But those interviewed by NCR say it's not necessarily that they fell out of love with the liturgy. They withdrew due to the bigotry and toxicity in traditional parishes.

Sean Dailey of Springfield, Illinois, loved the beauty of the old Mass and began attending the old rite when the Priestly Fraternity of St. Peter sent a priest to celebrate it in his parish in 2009. He even served as an acolyte at these Masses.

"Things went well for a few years, though I stopped serving in 2014, partly out of disgust with how 'trads' were treating Pope Francis," he said, referring to traditionalist Catholics who have opposed Francis. Some even refuse to recognize him as pope.

The next year, Springfield Bishop Thomas Paprocki invited a Chicago traditionalist order, the Canons Regular of St. John Cantius, to staff a parish across town, and the weekly extraordinary form Mass moved from his parish to that one.

In Dailey's view, sequestering the extraordinary form Mass in its own parish was no longer in keeping with Pope Benedict's intent for Summorum Pontificum, the document that allowed for expansion of the Latin Mass.

"Now, of course, Mass is about union with Christ, and in a pinch, I'll kneel shoulder-to-shoulder with anyone," he said. "But I see no reason to worship with conspiracy theorists if I don't have to. And that's mostly what trads have become."

A sacramentary is seen on the altar during a traditional Tridentine Mass July 18, at St. Josaphat Church in the Queens borough of New York City. (CNS/Gregory A. Shemitz)

Sergio Garibay used to identify as a traditionalist and attended Mass at a Society of St. Pius X chapel. Founded in 1970 by French Archbishop Marcel Lefebvre, the Society of St. Pius X makes retaining the Tridentine rite a priority, but presently has no canonical status in the Catholic Church. Garibay ultimately became discontented with this chapel and began attending a parish that celebrates the novus ordo in way that he finds reverent.

What put him off, about the Tridentine community? In his view, some "didn't have an understanding of Catholicity" and upheld theologically inaccurate beliefs "such the scapular or the rosary as a requirement for salvation."

Garibay said he began to interact more with the people he was "supposed to hate": feminists, queer people, Muslims and Jews.

"Interacting with the other sides helped me realize that no one is 'evil', but rather that each of us have been blinded by our prides that we forgot to see across the dinner table. We are all in the same table as one big human family," he said.

Rachel Dobbs, writing in Where Peter Is, discussed her own experience of the traditionalist culture in which she was once deeply immersed when she attended the Tridentine Mass:

"There was always a constant state of unease. We were the Faithful Remnant, the true Catholics preserving tradition. I saw myself that way. I remembered how I looked down on all those 'other' Catholics," she said. 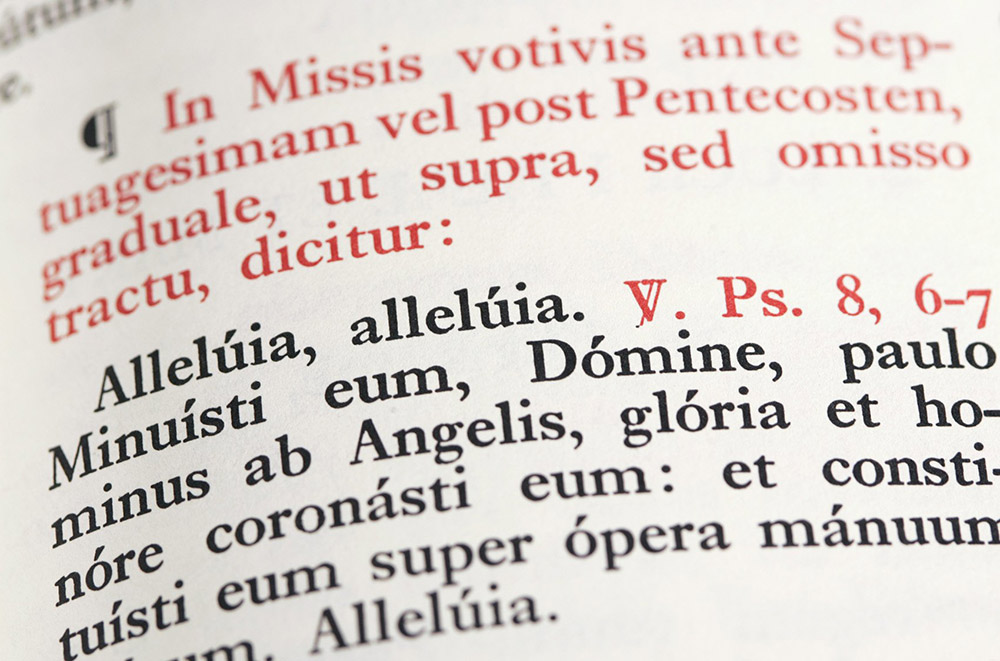 A detail of the Gospel acclamation from a reproduction of the 1962 Roman Missal. Commonly known as the Tridentine Mass, the Mass of this missal is entirely in Latin. (CNS/Nancy Wiechec)

Dobbs rejected these prejudices, but the toxicity grew worse, especially after the election of Francis. Finally, Dobbs had enough. It was no longer possible for her to believe that access to the wonderful aesthetics of the older rite automatically made for holier people. In 2018, Dobbs began attending the ordinary form Mass.

Daniel Rakowski, who lives in suburban Detroit, similarly fell out of love with his Latin Mass parish. He had been attracted to it because of its confirmation prep, which contrasted favorably with what he considered a lightweight program at his former parish.

But the pastor's paranoid, controlling behavior was off-putting. And while the people there were generally kind and friendly, Rakowski said, "Their niceness was for the in-group. There was an utter viciousness and judgmentalism for anyone else."

When the parishioners gave their enthusiastic support to Donald Trump in the primaries, Rakowski was "appalled." He no longer attends that parish.

This phenomenon of disenchantment with traditionalist parishes is not exclusive to the United States. Massimo (who asked that his last name not be shared) lives in Switzerland. He described in an email interview how he began attending Tridentine Masses in 1998, and in 2001 switched to Society of St. Pius X chapels, because he believed the dissenting fraternity to be more consistent. But after 15 years, his family drifted away from these parishes, largely due to the conduct of the people there.

"Previously I believed it was the 'one true religion' as expressed by the TLM, versus the false 'modernist' religion of the post-Vatican II church. In recent years, I have learned that it's a totally different story: rather the religion of a God who loves us infinitely and unconditionally, the God of the gospels, versus the religion of a God who is cruel and vindictive, who is just waiting for us to break one petty rule in order to cast us into hell for all eternity."

So, are Latin Mass parishes growing despite this trend of leave-taking? Probably not, or at least not much.

David Gibson, writing for Sapientia, the blog of the Center on Religion and Culture at Fordham University, questions the supposed popularity of traditionalist Catholicism:

"The idea that Catholics are pining for the Tridentine Rite is the trend story that never dies. It is the line that Trads have been feeding everyone for decades, and it was amplified by church leaders like Pope Benedict XVI, who in broadening the use of the old rite in 2007 said that his move was prompted by ongoing requests from around the world and that 'even young people' were drawn to it. First Things editor and Latin Mass loyalist Matthew Schmitz echoed that view in a 2017 article in the Catholic Herald: 'Wherever one looks, the kids are old rite.' "

As Gibson points out, the claims are not supported by evidence. When you look at the actual numbers of traditionalist parishes, you realize how miniscule a segment of the Catholic population they really represent. The United States boasts the largest number of Tridentine churches: 659, according to the Latin Mass Directory at the time of this writing.

But in a nation with approximately 70 million Catholics, that's about 10 venues for every million worshippers. And it's around 4% of the total 16,700 Catholic parishes in the United States. Globally, only 63 countries even have churches where the traditional mass is celebrated, and many of these have only one or two venues.

While it is difficult to gauge the actual rate of growth of these venues, one would expect, if traditionalist Catholicism had really been enjoying a growth spurt since the time of Pope Benedict's Summorum Pontificum, to see greater numbers and percentages.

Why, then, would we buy the line that these parishes are growing? Partially due to how vocal traditionalists are.

As Gibson observes: "The tendency of the Latin Mass fans to self-select, to gather intentionally and often with greater effort than many parishioners, is a natural function of their passion and that's a chief reason why they can project an image of a growing cohort. They are visible and they are often outspoken about their beliefs."

A version of this story appeared in the Oct 15-28, 2021 print issue under the headline: Bigotry and toxicity in parishes.