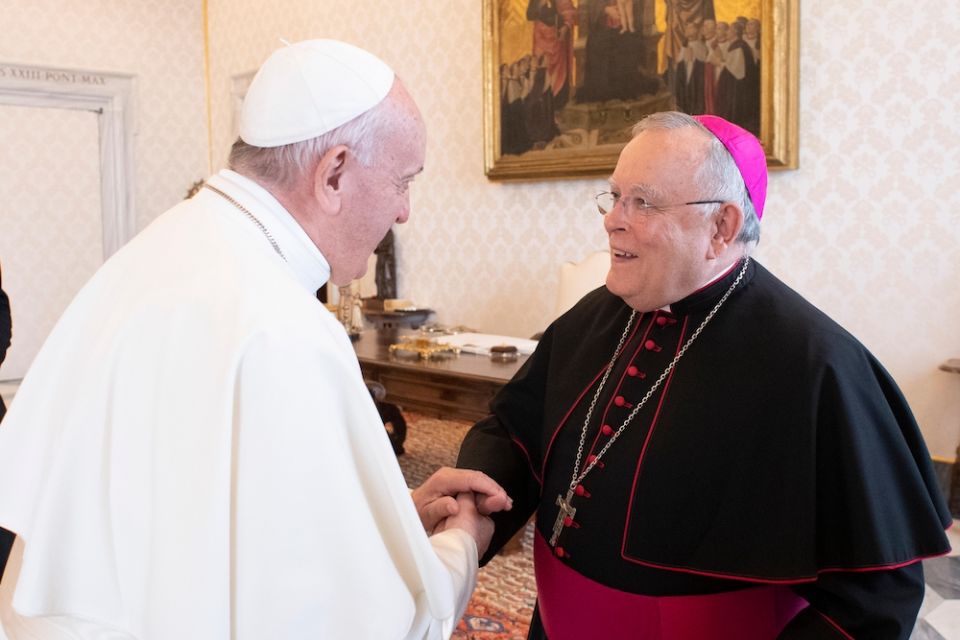 Pope Francis greets Archbishop Charles Chaput of Philadelphia during a meeting with U.S. bishops from New Jersey and Pennsylvania in the Apostolic Palace at the Vatican Nov. 28, 2019. (CNS/Vatican Media)

Archbishop Charles Chaput, who retired as the ordinary of Philadelphia a little more than a year ago, has just published his latest book.

The 76-year-old Capuchin is one of the leading American bishops driving "culture war" Catholicism in the United States.

And, as it was with his previous publications, the rollout of this new volume was a carefully planned operation.

There were interviews with the author to announce the book's release and endorsements from a number of U.S. religious conservatives. They included clerics, journalists, academics and Catholic media celebrities.

Things Worth Dying For is the provocative title of the archbishop's new work. And like his earlier books — and high-profile lectures — it is part of his ecclesial leadership style and effort to put forth a very particular vision for the Church and society.

Archbishop Chaput and many of his views need to be challenged. But most liberal and progressive Catholics are just ignoring him. They do so at their own peril.

It is striking that Chaput seems to be the only US bishop in the 21st century who seems capable or willing to offer to the wider public — Catholics and non-Catholics alike — his vision in a format that leaves an impression and a deeper effect than the occasional interview or speech.The late Cardinal Francis George OMI, who served as archbishop of Chicago from 1997-2014, was probably the country's only other bishop this century to do so. And he, too, spoke out from the conservative end of the Catholic spectrum.

An effective way to influence the Church and society

Even though Archbishop Chaput is now retired, he has retained his role as one of the leading public voices in the American Catholic culture wars.

We were reminded of this a few weeks ago when he wrote an article pressuring the US Conference of Catholic Bishops (USCCB) to study the issue of giving communion to President Biden because of his support of the Democratic Party's pro-choice policies.

Chaput's books are not academic essays, but more like pamphlets. To be a bishop you do not have to be academic, and not every bishop has to publish books.

But for a bishop that aspires to have a leadership role in the public conversation about the Church in these turbulent times, publishing a book is an effective way to do it. 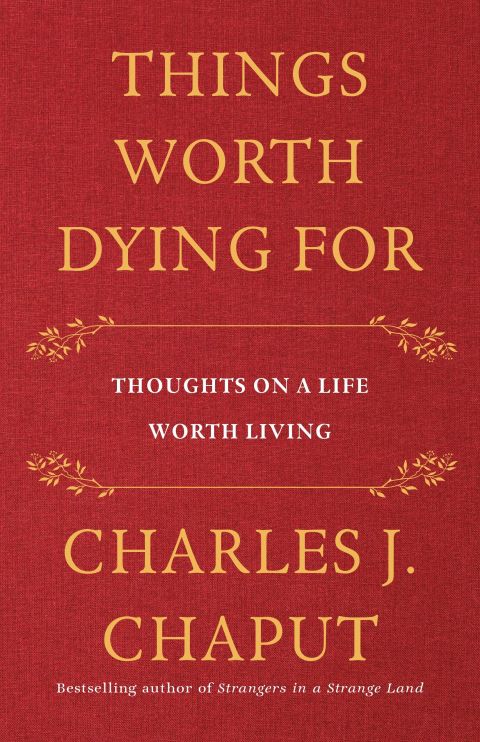 Chaput writes readable essays that put forth a thesis and a proposal. He seems to be one of the last bishops capable or willing to do this.

Perhaps that is partly because the current crisis of institutional Catholicism seems to have brought an end to the tradition of bishops and cardinals who were also something like public intellectuals.

There were the philosophical works of Karol Wojtyla, the biblical and spiritual essays of Carlo Maria Martini, the cultural and anthropological critique of Camillo Ruini, the fundamental theology of Karl Lehmann and, of course, the mostly political theology of Joseph Ratzinger (published during his years as prefect of the Congregation for the Doctrine of the Faith).

All of these men are either dead or retired. Today it is rare to find a bishop who is publishing books that are more than a mere collection of his homilies.

In addition to Chaput, there is also Cardinal Robert Sarah in Rome, former prefect of the Congregation for Divine Worship and the Discipline of Sacraments. He has written a number of books in the past several years and the one he published on the priesthood in early 2020 caused much controversy.

There are other conservative authors in the United States — among both the clergy and the laity — that continue to offer their combative and bellicose view of Catholicism. George Weigel, of course, is among the best known.

Where are the progressive Catholic voices?

The question is why, on the other side of the Catholic spectrum, there are no bishops that publish books that offer a vision of the Church and of society that is different and alternative to the one offered by Archbishop Chaput, Cardinal Sarah and Mr. Weigel.

The phenomenon is not particular to the Church in the United States, by the way.

And there are many possible reasons why it exist.

The first has to do with the changes in the intellectual profile of those who are appointed bishops, which can vary from one country to another.

Nearly 40 years ago sociologists Pierre Bourdieu and Monique de Saint Martin looked at the situation among the bishops in France.

They noted the there was a shift from appointing bishops who were from "les héritiers", the Catholic intellectual "aristocracy", to those who were part of "les oblats", "zealots" and administrators.

This newer type of French bishop was a man whose concern and identity was to preserve the institutional Church, since he lacked a deep intellectual and non-clerical formation.

A second reason for the phenomenon is linked to the massive changes in the actual job of being a bishop (sex abuse scandal, downsizing of Church structures, collapse in the social role of the clergy, etc.), which leave no time or energy to write books.

This change in the job description is one of the reasons more and more candidates to become bishops refuse. 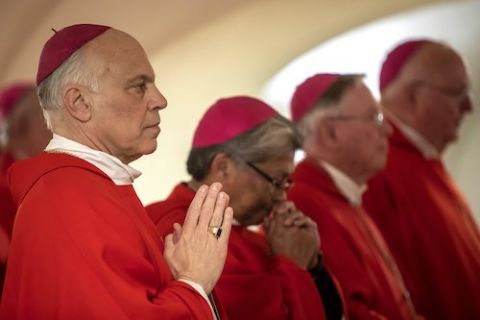 Archbishop Salvatore Cordileone of San Francisco is seen with other bishops in the crypt of St. Peter's Basilica Jan. 27, 2020, during their "ad limina" visit to the Vatican. (CNS/Stefano Dal Pozzolo)

Inability to articulate a vision, loss of moral authority

A third reason is that the bishops today are overwhelmed by the ideological insanity that infests their episcopal conferences. The United States is a prime example.

The USCCB these past several years has invested its authority on different issues in a hugely disproportionate way.

Look, for example, at the moral judgements the conference so often makes on LGBTQ and "pelvic issues" while remaining totally silent on the new version of Jim Crow racism that target the voting rights of Americans (many of them, Catholics) in certain states.

A fourth possible reason is that the bishops who are different from Chaput cannot articulate their vision of the Church and Catholicism.

It is something that can be seen in Catholic academia as well, where it has become more difficult, from the liberal standpoint, to make an effective argument for what I would call "ecclesiodicy" — a reasonable defense of the existence of the institutional Church and the possibility of reforming it.

A fifth reason could be that progressive bishops believe they lack the moral authority to articulate a vision of the Church. The ongoing abuse scandal seems to have silenced their voices of more than their conservative confreres'.

This is despite the fact that the moral and theological burden of the scandal is part of the legacy of John Paul II and Benedict XVI (even before he was elected pope) and of the generation of bishops these two men appointed and promoted.

A sixth reason — progressive bishops don't know who would be interested in such a vision. Both the young clergy and professional Catholic theologians seem to be more detached than ever before from the bishops, for different reasons.

The young conservative clergy because their heroes are the Chaputs and the Sarahs; progressive theologians because Catholic academia has moved towards a vision that is post-institutional and post-ecclesial — if not in theory, certainly in practice.

A seventh reason is that progressive bishops lack the ecclesiastical-industrial complex that supports authors on the Catholic right: the media system (especially the EWTN colossus), conservative Catholic think tanks, schools and universities, magazines, associations and organizations like Napa Institute and the Knights of Columbus.

An eighth and, perhaps, final reason for this phenomenon is that there is a market for reactionary non-fiction and Church politics that is much stronger among conservatives than the liberal-progressives. 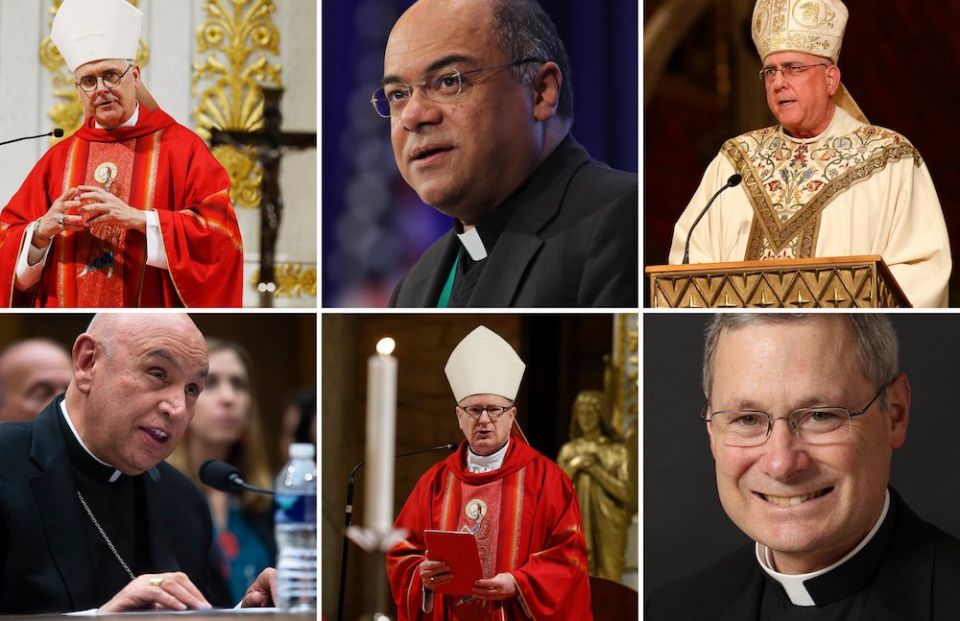 There is a conservative "Party of God" that invests in culture, while the progressive side invests in other kinds of endeavors that reflect the kind of Christianity they believe in (e.g. work for the poor and marginalized).

In doing so, the progressive side fails to reach a large audience in the institutional Church and those who still hold the keys to structural change.

It is important to acknowledge that there is an asymmetry between the voice of cultural warriors and that of progressive Catholicism, while obviously being careful not to generalize the terms "conservative" and "progressive".

Pope Francis has probably arrived about a decade too late, especially for the Church in the United States (though not only here).

He was elected after the pontificates of John Paul II and Benedict XVI, which contributed (far beyond their intentions, I believe) to radicalize conservative Catholicism in a traditionalist sense and boosted the clerical system.

In this asymmetry, conservatives have a very clear playbook — the culture wars.

Progressives are trying to withdraw from those wars that have caused huge damage to the Church, both intellectually and spiritually.

Raimon Panikkar, a Catholic philosopher and theologian whose Spanish mother was a Catholic and Indian father was Hindu, famously said that "cultural disarmament" is an effective way to peace.

But cultural disarmament must be explained and articulated, otherwise it looks like unconditional surrender.

Finally, Francis' pontificate seems to be pretty much focused on Pope Francis, thanks to the Vatican's communications department and the popes' unofficial spokespersons and interpreters.

The so-called "Francis bishops", those most supportive of the pontificate's aims and vision, seem capable only of repeating or imitating what is coming. It would be easy to compile a bibliography of books written by bishops and Catholic intellectuals that are openly critical of Francis. And it's not difficult to make a list of the books and treatises authored by the pope himself.

But it would be much more difficult to put together a catalogue of books written by bishops and Catholic intellectuals that try to articulate Francis' vision for the Church and society.

And this is not something that can be blamed on the pope or his opponents.

Let's give up culture war infighting for Lent