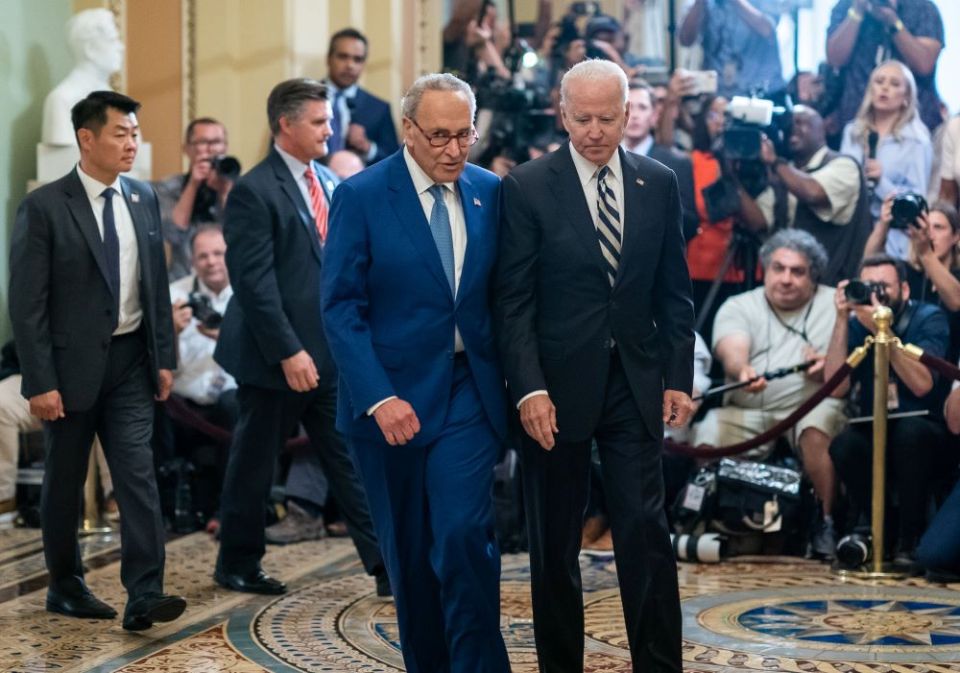 Senate Majority Leader Chuck Schumer and Sen. Joe Manchin on July 27 announced a deal on an energy and health care bill, a breakthrough after more than a year of failed negotiations. In this July 14, 2021, file photo, Schumer and President Joe Biden speak to the press at the U.S. Capitol in Washington, D.C. (Flickr/Official White House Photo/Adam Schultz)

No one wants to jinx it, but it looks like the Democrats in the U.S. Senate finally devised a multifaceted piece of legislation that will lower the cost of prescription drugs, help combat climate change and establish a 15% minimum tax for corporations. All of it is "scrubbed," in the words of Sen. Joe Manchin, to make sure it does not add inflationary pressures on the economy.

Inflation is the No. 1, 2 and 3 issue for most Americans. Gallup tracks what issue most concerns voters, and 18% of voters named inflation specifically in the two most recent monthly surveys, and 12% and 13% named the economy in general in the May and June surveys, respectively. In June, another 5% identified fuel prices as their top issue. By way of comparison, only 8% in June identified guns and gun control as their top concern, 3% named racism, and 2% listed climate change and the environment.

The most important part of the proposal involves taxation. The establishment of a 15% minimum tax for corporations is essential for the world economy, helping to end the practice of corporations moving all over the world in order to find ever-lower tax rates. What is more, the proposal — which I first wrote about in January 2021 — helps to redirect populist anger at the plutocrats in our society. In June 2021 the G7 agreed to the idea, but the Senate couldn't pass it so President Joe Biden looked ineffectual and his party looked still too beholden to Wall Street.

In recent decades, Democrats misplaced their principal calling card with working-class voters, a willingness to embrace economic populist policies that sock it to the rich and invest in our commonwealth or, as my old philosophy professor Paul Weiss called it, the "commonhealth." 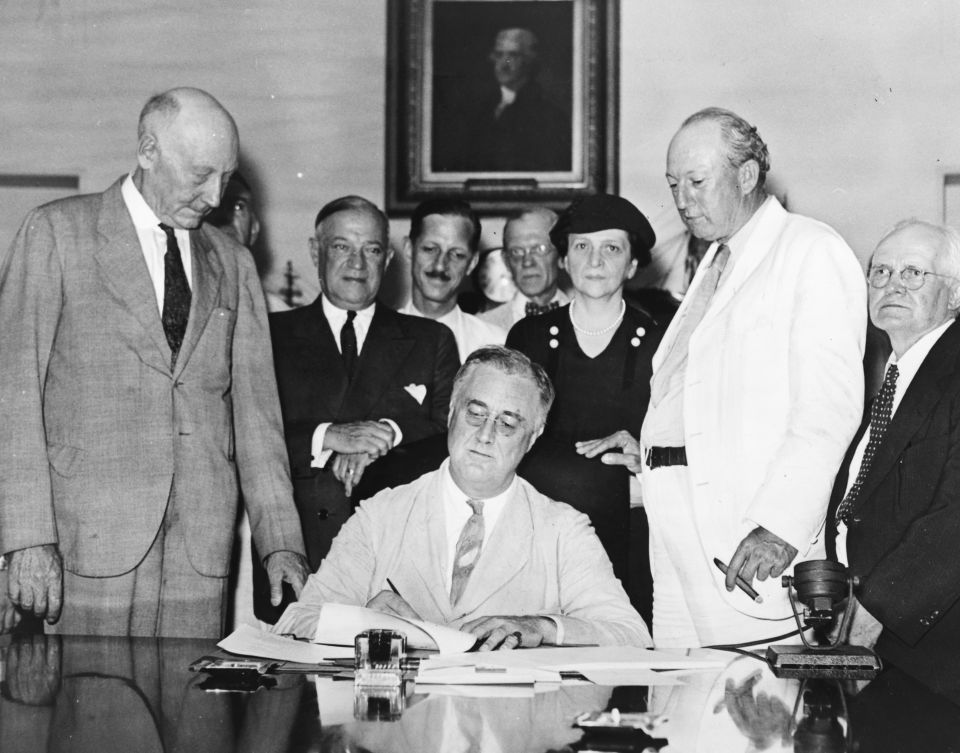 President Franklin D. Roosevelt signs the Social Security Act Aug. 14, 1935. It was one several programs Roosevelt enacted from 1933 to 1939 as part of the New Deal, intended to stabilize the country's economy and provide relief to American workers and families. (Wikimedia Commons/Social Security Online)

During the Clinton and Obama presidencies, too much credence was given to neoliberal economic policies. Their economic teams displayed too much confidence that overall growth would lift all boats, thought what was good for Wall Street would be good for Main Street, and adopted an approach to globalization via laissez-faire policies that failed to protect workers' rights while making capital mobile in ways heretofore unimaginable. This, combined with a commitment to cultural ideas about meritocracy, led to the Democrats shedding working-class voters in droves.

Donald Trump jumped into the void with a nationalist populism that appealed to the lower angels of our natures, but did nothing to actually improve the lives of working-class Americans.

In the mid 2010s, something snapped in the psyche of a critical mass of voters in the US and the UK. They felt abandoned by politicians, condescended to by liberal elites, ignored in the wave of economic globalization, taken for granted by the two parties. Struggling to get by, they also felt less and less at home in their own country. For this, they were derided as racists and bigots or deplorables, or simply ignored.

In this new bill, the Democrats tell working-class voters that the party of Franklin Delano Roosevelt is rediscovering its heritage, is again ready to make the rich pay their fair share and to fight to lower the cost of living for the rest of us, especially the elderly. If Republicans think seniors will not notice when they vote against lowering drug prices, they are deluding themselves.

The bill also does something FDR would not have thought to do: It puts down the largest federal investment in efforts to combat climate change in history, including $370 billion in tax credits to help corporations convert to sustainable energy and, significantly, to assist poor communities that have historically suffered most from pollution.

The United States has largely forfeited its world leadership role when it comes to climate issues. The clock is ticking. Earlier this year, the Intergovernmental Panel on Climate Change warned that many aspects of climate change are now irreversible, but there is still time to turn things around so that global warming does not cause even more widespread human suffering. The report also indicated that the instances of extreme weather linked to climate change have, so far, been worse than anticipated. And those adverse effects will be felt most in the poorest countries in the world, which also have done the least to cause manmade climate change. This bill is a step, a first step, in the right direction for the U.S. government.

The legislation also should help restore the Democratic brand because it will show the government being responsive to the concerns of the citizenry. Setting aside the cult of Trump, the biggest difference between the two parties remains their view of government. The new bill will demonstrate that government can still work, still "form a more perfect Union, establish Justice, insure domestic Tranquility, provide for the common defence, promote the general Welfare, and secure the Blessings of Liberty to ourselves and our Posterity."

Ronald Reagan famously quipped, "The nine most terrifying words in the English language are: I’m from the Government, and I’m here to help." That remains the core ideological belief of the Republican Party. It is not the view of the Democratic Party. It is also not the view of Catholic social doctrine.

The American people need help. Seniors really do need more affordable prescription drugs. All of us really do need fewer wildfires and droughts and floods and hurricanes. We really do need the kind of justice that makes sure Jeff Bezos and Elon Musk do not pay less in taxes than their staff does.

The new legislation does not contain everything progressives would want. And if it had been passed last year rather than this year, the beneficial effects would be more widely felt before election day. But this is where we are and the proposed law contains policies fully consistent with the common good. Its passage will be a good thing, not only for the Democrats but for the whole country.

At Season of Creation's end, know this: Climate change is here