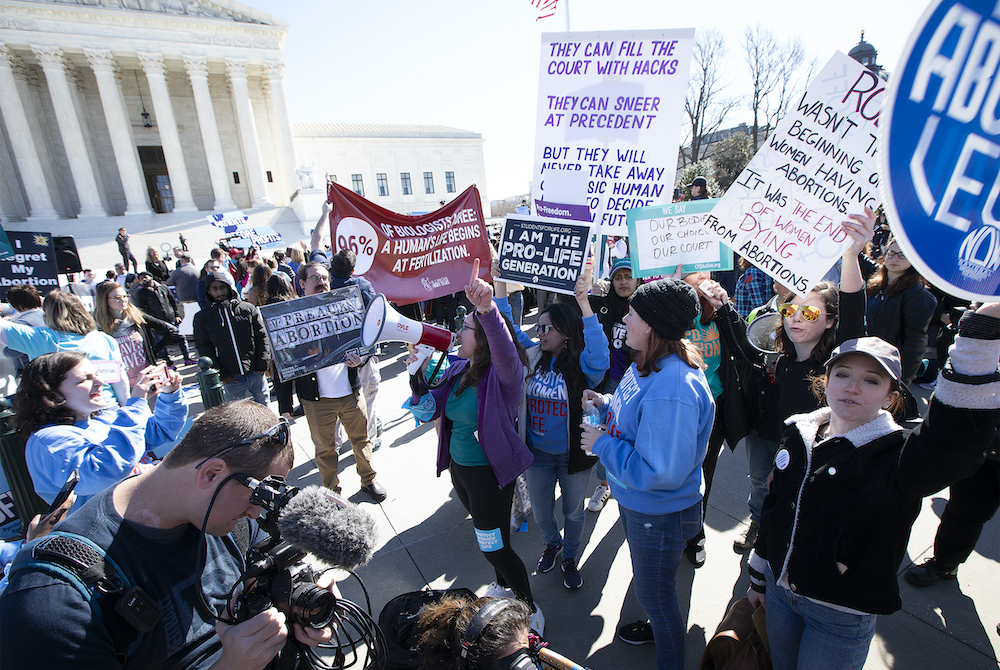 Demonstrators are seen near the U.S. Supreme Court in Washington March 4. The court heard oral arguments that same day in June Medical Services v. Russo, a challenge to a Louisiana law, passed in 2014, that requires abortion providers to have "active admitting privileges" at a hospital within 30 miles of the abortion facility. (CNS/Tyler Orsburn)

It started on Twitter. After our executive editor Heidi Schlumpf published a column praising Congresswoman Alexandria Ocasio-Cortez for a magnificent speech she delivered after Congressman Ted Yoho called her something vulgar (which I shall not repeat), pro-life activists attacked Schlumpf on Twitter. She was called Satan. She was called a baby murderer. Schlumpf's sin? She had not denounced AOC's stance on abortion.

Other angry pro-lifers called the NCR customer service number and shouted vulgarities at the people who answer the phones, people who were not responsible for AOC's position on abortion or for Schlumpf's column.

The emails were worse: "You must be a extremist leftist liberal DUMBOCRAP? You should be reprimanded and then issue a formal apology to the Catholic Religious community," one "concerned Catholic" wrote to Schlumpf. "If not, you will be dealt with by the Silent Majority In a way that you will regret. Your [sic] a disgusting and pathetic journalist who's [sic] main objective is to disturb and agitate many folks out here. You are exactly what is wrong with our country today. You have absolutely no values. Go away. Crawl back under you [sic] keyboard Snowflake. Shame! Shame! Shame!"

In this day and age, we have grown accustomed to these kinds of reactions, but shouldn't we expect better from pro-lifers? If you really care about the dignity of every human life, you can't treat other people like dirt. We all have bad days. No one knows better than I the spiritual and moral danger of judgmentalism, and many times must I confess the sin of delectatio morosa. But it seems that every time someone crosses the pro-life Catholic brigade, you get this kind of over-the-top, profoundly hateful reaction, and I suspect it doesn't help the pro-life cause one little bit.

Now, a new report from the McGrath Institute for Church Life at the University of Notre Dame confirms that suspicion. The methodology of the study — in-depth interviews with 217 people, selected at random but who approximate the diversity of the country — allowed the researchers to get past the tired and hoary labels that this discussion is stuck with: Turns out "pro-life" and "pro-choice" are terms that have become fraught with associations that do not reflect the complexity and the ambivalence of people's views on abortion.

"The majority of Americans occupy the edges of neither ideology nor abortion attitudes," the report states. "Most fall somewhere in between."

The whole report is important, but for my purposes today, I would like to focus on the fourth part, which offers suggestions about how we, as a culture, can facilitate a more fruitful conversation about abortion, specifically two of the key points the report makes.

First, the report states, "Americans can talk about abortion under the right conditions, are more inclined to enter conversations than debates, and would benefit from expanded education in science, law, and moral reasoning."

Far be it from a columnist to denounce the positive benefits of debate: Steel sharpens steel. But because abortion is viewed by most people as a deeply personal issue first, and only as an abstract political issue subsequently, the preference for conversations over debate is more likely to avoid short-circuiting the conversation.

There are times and issues on which it is advisable to be stiff-necked. Indeed, on this issue, I wish some Catholic politicians had been more stiff-necked in the 1970s. (Connecticut Gov. Ella Grasso was a great exception: She remained opposed to abortion and will always be a hero to me.) It is no longer the 1970s, and there is no going back. It is a time to persuade, and persuasion requires more conversation and less debate.

The other point I would like to highlight is this one: "Americans can enter conversations about abortion on common ground to support positive long-term outcomes for pregnant women, their conceiving partners, and children." The report confronts the prevailing narrative that has largely governed the discussion so far: "For decades we have heard that the abortion question hinges on one thing: whether or not what is inside the womb is a 'baby' or a 'fetus' — a 'person,' 'human being,' or 'life' with equal protection under the law."

This is true, of course: In one sense, the discussion is a categorical one. Still, the categorical debate has landed our country and our culture in this terrible place in which the extremes dictate the terms of debate.

The report notes that while the respondents discussed issues like fetal viability, "just as commonly, we heard interviewees ponder the essentials of a 'good life' for the baby or parent(s). A 'good life,' it would seem, includes health, support, financial stability, affection, rights, and pursuit of chosen livelihoods. Americans deliberate these 'good life' cornerstones as much as they do those marking the onset of 'life.' "

This is thin ice to be skating on. It is the language of eugenics, and it is scary. Listen to a recent interview Terry Gross had with Professor Diana Foster Greene about a study comparing "the emotional health and socioeconomic outcomes for women who received a wanted abortion and those who were denied one." Greene states, at one point:

So when you ask women, why do you want to have an abortion? — they give reasons. The most common is that they can't afford to have a child, or they can't afford to have another child. And we see very large differences in economic well-being over time. Another surprising fact is that most women who have abortions — 60% of women who have abortions in the United States are already mothers. And so a common reason is that they want to take care of the children they already have.

Our country and our culture should do all in its power to make sure that the first, and most common, reason for procuring an abortion is dealt with: No mother should be made to feel she cannot afford to have a child. The second reason is the choosing of one child over another, and it is halfway down the slippery eugenic slope.

Instead of invoking Josef Mengele, however, let's note a different aspect of Greene's observation. She uses the language of solidarity, not the language of autonomy: "They want to take care of the children they already have."

The first thing to be done by those of us who believe abortion is an infamy is to find or create greater bonds of solidarity with women and their children and to discuss abortion only in terms of solidarity. The science, so often invoked these days by those on the political left, will help end the libertarian, autonomy framing of the discussion: Whatever else you may or may not know about an unborn child, its DNA is different from that of its parents and so the argument "it's a woman's body" misstates the actual scientific reality. So, too, does ignoring the degree to which an unborn child is completely dependent on the mother's body. As soon as we, as a culture, recognize that we are talking about two souls, solidarity has a shot to redirect the discussion in ways that respect women and protect unborn lives.

The abortion issue is about to heat up. A "pro-choice" Catholic is about to be nominated for the presidency, and he undoubtedly will be joined by a pro-choice woman on the Democratic Party's ticket. The challenge for Catholics is to avoid the debate and look for ways to start some conversations. The McGrath Institute's report is a good place to start.