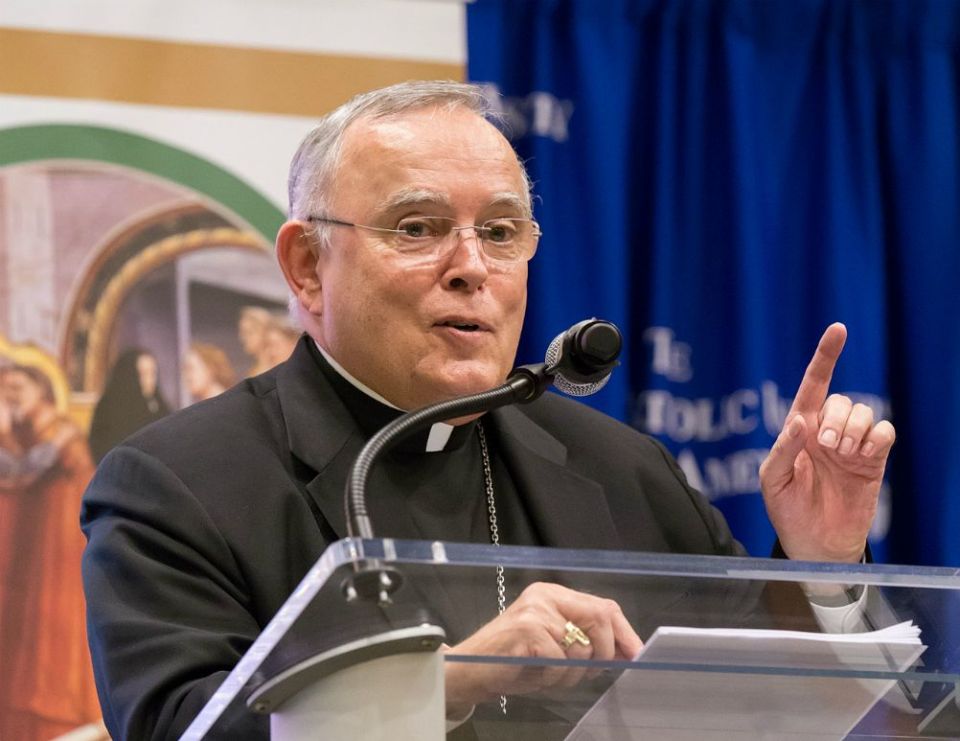 Philadelphia Archbishop Charles Chaput delivers a keynote speech April 4 to open a symposium at The Catholic University of America in Washington. (CNS/CUA/Rui Barros)

Mea maxima culpa. Last week, I wrote about the way some conservatives are weaponizing the clergy sex abuse crisis in all its tragedy and using it to promote prelates they like and tear down prelates they don't, none of it having anything to do with the scourge of clergy sexual abuse or episcopal unaccountability. I specifically cited remarks conservative pundit Hugh Hewitt made on "Meet the Press," remarks that were so uninformed and clumsy, I assumed Hewitt did not know the first thing about the hierarchy. "Who gave Hewitt his talking points?" I asked. "Could he pick either Archbishop Charles Chaput or José Gomez out of a lineup?"

Turns out, Chaput is a regular guest on Hewitt's talk radio program. This makes Hewitt's vulgar calls for the resignation of Cardinal Donald Wuerl even more disturbing. I call on the Archbishop of Philadelphia to disassociate himself from Hewitt's calls publicly. Silence presumes consent, as Thomas More reminds us in "A Man for All Seasons." Come out, Archbishop: Do you agree with your friend or not?

Reading through transcripts of Chaput's appearances in Hewitt's shows is a penitential act. Some are funny. Shortly after the election of Pope Francis in 2013, Chaput went on Hewitt's show and like many conservative commentators, thoroughly misjudged the man that had been elected. At one point, Hewitt says, "Now the social issues, especially marriage, he has confronted, and I think we have a very clear picture. But I'd like to hear your opinion on how committed he will be to the public defense of the Christian understanding of marriage and life from its earliest moments to its last natural moments?" And, Chaput replies, "… he certainly took a very clear public stand on the matter that we, when we mess with marriage, we mess with God's plan. And that throws everything off the center, and it really is damaging not only to individuals, but to cultures. So there's no doubt where he stands on that."

Chaput continued, "On the issue of life, he's even said something that I'm very happy to be said, that those who promote abortion or do act to make it possible, even politicians, ought not to receive Holy Communion in the Catholic Church, because they're not in communion with the Catholic Church on those issues. I thought that was terrific, and I hope that those who are Catholics and who take positions contrary to the church listen to him and let him change their lives, bring them back to where they belong." In short, Chaput's enthusiasm stemmed from the false expectation that Francis was a culture warrior just like himself. As for his comments about Catholics "who take positions contrary to the church," I hope the good archbishop has asked his friends at First Things about their opposition to the pope's recent change to the catechism regarding capital punishment.

I confess I had forgotten that Chaput had expressed surprise that the press was "hostile" to President Donald Trump, and I had also forgotten that he expressed the sentiment during another appearance on Hewitt's show. "It's just amazing to me how hostile the press is to everything the president does," Chaput said. "I don't want to be partisan in my comments here, but it seems to me if we are really serious about our common responsibilities, we support the president," Chaput said, "whether we accept everything he stands for or not, and wish him success rather than trying to undermine him." A wee bit different from the stance he took towards President Barack Obama. More importantly, what Chaput was saying, like so many other conservatives and Republicans, is that so long as they got what they wanted — tax cuts for the rich, deregulation of the fossil fuel industry, Supreme Court nominees vetted by Leonard Leo — they would overlook the president's racism, misogyny, and likely subornation by a foreign and hostile power.

Perhaps the most revealing appearance came the very next week, when Chaput was on Hewitt's show to discuss his new book, Strangers in a Strange Land. Chaput, in both the book and the interview, repeated his endlessly negative, even Manichaean, indictment of contemporary culture: The hostile, secular world produces nothing good, and it incessantly seeks to destroy the church. Of course, there is always some of that in every age, but maybe if Chaput had, like his confrere Cardinal Blase Cupich, taken the time to get to know people, place the best, not the worst, interpretations on their actions, give people the benefit of the doubt, be more affirming and less judgmental, maybe the legislature in the Commonwealth of Pennsylvania would be considering tuition tax credits for Catholic schools that Cupich achieves in Illinois, instead of a lifting of the statute of limitations on child sex abuse that the Pennsylvania bishops seem to have made necessary.

Consider this passage from the interview:

We live in a world today where the environment is probably less friendly to the Catholic faith, or the Christian faith in general, really. People don't know it, though, and because of that, they're less interested in sending their kids to Catholic school. They think everything's just fine. If we really were able to afford a Catholic education for everyone, I think it would be one of the best ways to inoculate people against the viruses that are so present in our society. But unfortunately, it's very, very difficult to do that these days, so our Catholic school systems are diminishing as time goes on. And it takes an heroic effort on the part of many, many people who are very generous to keep them open.

That's right, and I think we're taught in schools generally that it's important for us to be objective and have scientific proofs and evidence of everything before we embrace a point of view. We're taught that everything is else is simply people's opinion, and so people are afraid to appear foolish in the face of this kind of scientific technological world in which we live, especially people who have jobs at universities and in politics. There's a great embarrassment about being a woman or a man of faith.

Newflash: The principal reason people might be embarrassed to be identified with the Catholic Church in the past 20 years has nothing to do with the nefarious forces of secularism. It is that too many of our bishops have driven people away by their failure to protect children, their willingly becoming an arm of the Republican Party, and their harsh, pompous judgmentalism, unaccompanied by anything like sophisticated cultural analysis. Seriously, if anything comes through reading these transcripts, it is how comfortable Chaput is on a right wing talk radio show. Let that sink in a bit.

No one should be surprised that Hewitt was so lavish and uncritical in his praise for Chaput's tome. As I observed in my review of that book, it "leaves the reader wondering why a bishop would feel compelled to pen such a thing, reliant as it is on virtually every right wing thread of cultural and political analysis." There it is. Chaput wants to be Hugh Hewitt when he grows up.

Another exchange in that same interview is more than a little interesting.

HH: The Vice President has said he is a Christian conservative Republican in that order. He may be the most public person to so say.

CC: I think so, too. I really admired him when he said that, because in some circles that would risk an election, actually.

Vice President Mike Pence has long practiced the kind of sectarian, moralistic Christianity in the public square that has given the Christian Church such a bad name. Chaput does not admit it, but the rise of the religiously unaffiliated, the "nones," coincides with the political rise of the Mike Pences of the world. Indeed, it is worth noting that Pence embodies in his person the "ecumenism of hate" about which Fr. Antonio Spadaro and Rev. Marcelo Figueroa wrote in their controversial essay "Evangelical Fundamentalism and Catholic Integralism: A Surprising Ecumenism." Pence was reared in the Catholic Church and left it to become an evangelical and is an avatar of the religious politics Spadaro and Figueroa rightly denounced as antithetical to the Gospel. Worth noting, too, that in the earlier and happier times for which these conservative Christians seem to pine, Pence would be known as an apostate.

The most ironic thing Chaput said, however, and the thing most relevant to the controversy today, is this:

You know, there's a tendency in our culture today to do all that we can to destroy the enemy, and to silence those who are not sufficiently conservative or sufficiently progressive. And unfortunately, that affects all people. And you know, part of, you know, one of the things that Jesus taught us was that the truth sets us free. So if that's true, then we shouldn't be afraid to explore the truth, and then to live in it, and be willing to share the truth with other people. Now that has a cost, Hugh.

The "tendency" to turn disagreements into wars and to insist on ideological purity tests is indeed disturbing. What is worse is when people like Hewitt use an issue like the sexual abuse of children, which has no ideological content, to score ideological points and promote like-minded prelates and denigrate others.

The prelates Hewitt promotes are Chaput and Gomez. He is welcome to praise them for their accomplishments. What he is wrong to do is distort the record. For example, in his recent op-ed in The Washington Post, Hewitt wrote, "Philadelphia's indefatigable Archbishop Charles Chaput was tasked by the pope to investigate the scandal-plagued Legion of Christ, and it was scoured." If you follow the link, you are informed of the visitation of the seminaries of the Legion of Christ that Chaput undertook in 2009, was long after the investigation into, and removal from ministry of, the founder of the Legion, Fr. Marcial Maciel. It is true that Gomez announced his predecessor Cardinal Roger Mahony would not be doing public ministry after revelations of his direct participation in cover-ups. Hewitt overstates the case in saying that he put Mahony under "effectively house arrest," and it is closer to a lie than not to omit the fact that within three months of the public rebuke, Mahony was again doing confirmations in the archdiocese. Why did he not mention that fact? Because it clouds his narrative and ideological agenda.

I do not care about Hewitt. I do not listen to conservative talk radio. But his attacks on Wuerl are so extreme and public, and his association with Chaput so long and easy they could almost finish each others' sentences in these interviews that it is not unreasonable to ask Chaput to explain his own position on the issue. Does he believe that Wuerl is, in Hewitt's words, "a con man"? Maybe he can tell us during his next appearance on Hewitt's show.