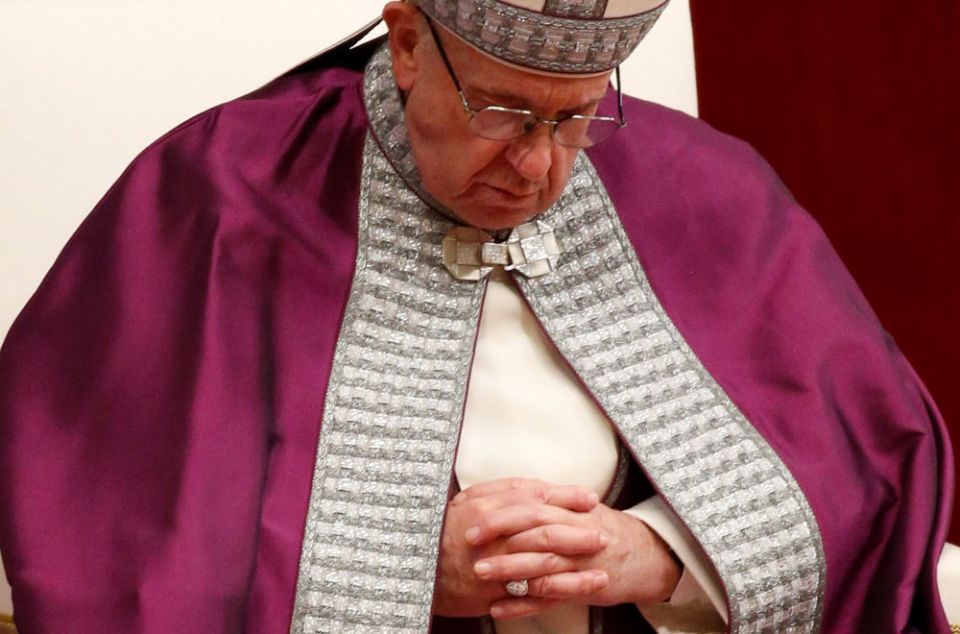 Pope Francis prays as he leads a Lenten penance service in early March in St. Peter's Basilica at the Vatican. (CNS/Stefano Rellandini, Reuters)

I think Attorney General Shapiro, Democrat of Pennsylvania, has set a standard for 49 other attorneys generals because we cannot trust the Catholic — we can trust some people: Chaput in Philadelphia, Gomez in Los Angeles. But you can't trust the church to do this.

And, later, Hewitt said this:

I'll tell you what … you fire Wuerl … you send Gomez here [Washington, D.C.].

If I had more time though I could run down a list of good, great leaders in the church, Chaput, Gomez, but I can also tell you that this pope has failed. And if he sends someone like McElroy out of San Diego or one of these other old, white guys who've been part of the complicity of conspiracy and cover-up for 40 years he will have failed in his most important challenge because those institutions are necessary.

This is curious: Who gave Hewitt his talking points? Could he pick either Archbishop Chaput or Gomez out of a lineup? Why are they trustworthy and not the others? Does he know Bishop McElroy's first name, or what he looks like, or that he is not one of those "old, white guys" but is actually ten years younger than Chaput and two years younger than Gomez, that he has only been a bishop for eight years not 40, unlike Chaput who has been a bishop for 30 years and Gomez for 17 years? Why is Hewitt sliming Bishop McElroy?

More important than, but related to, those questions are these others: Are people realizing there is a putsch in progress? Conservatives opposed to Pope Francis, who have never distinguished themselves in their concern for sex abuse victims, are doing their best to use the Pennsylvania grand jury report to advance an anti-Pope Francis agenda, attacking those bishops who support the pope and applauding those who oppose him, and none of it, not one whit, has anything to do with protecting children. Does Chuck Todd, do the editors of The Washington Post, do all these mainstream media commentators recognize the degree to which they are being used to advance an agenda, the ultimate objective of which is to provoke an anti-gay witch hunt within the Catholic clergy and defang Pope Francis' reform efforts?

Now, some of my dearest friends in the world think Cardinal Wuerl should resign because of what they learned in the Pennsylvania grand jury report. Others think the report is murky, leaves many questions unanswered, think that Wuerl made some mistakes but that to charge him with "returning rapists to ministry" conflates subsequent revelations about grotesque behavior with the knowledge Wuerl had at the time. We can have that disagreement all day. But, here is the thing: Dougherty and others have been throwing not just arguments but slime at Wuerl, Cardinal Sean O'Malley, Cardinal Joseph Tobin, Cardinal Blase Cupich and Cardinal Kevin Farrell, that is, Team Francis. For months, relying on poorly sourced gossip about the influence of former-cardinal Theodore McCarrick, articles that show only a lack of knowledge about the people and the processes of the church have appeared in print, sliming Team Francis. That is, before the grand jury report came out.

Further afield, one encounters the diabolical craziness of Church Militant and others who are intent on making the sex abuse scandal into an opportunity to rid the church of gay clergy. You may dismiss Church Militant as beyond the pale, and I do, but EWTN is a kind of gateway drug to that universe of malice and insanity. Last week, Raymond Arroyo featured writers Brad Miner and Liz Yore, both of whom started strong, calling this a moment of reckoning and speaking about the need for increased involvement by the laity. But, it quickly became clear that both people shared the Church Militant view that this sex abuse crisis is really about homosexuality. Nor was this a one-off: Look at the website for the Remnant newspaper where Yore writes or this video where Brad Miner displays his antipathy to Pope Francis at full throttle. Pardon my French, but this is bats--- crazy.

As I noted last week, calls for lay involvement must be carefully considered: Yes, we need the expertise of laypeople like Kathleen McChesney, who formerly worked at the FBI and was a key member of the first Review Board, and Nick Cafardi, a distinguished canon and civil lawyer who also served on that first board. And we need laypeople with expertise implementing sexual harassment policies in other organizations, people of stature who will not risk their professional reputation by condoning clerical or hierarchic malfeasance. We do not need the likes of Tim Busch, who never saw a problem with hosting disgraced Archbishop John Nienstedt as a kind of personal chaplain to Busch's Napa Institute until last week. Busch only severed ties with Nienstedt when it became too costly. Busch did not call for the release of a report about Nienstedt's misconduct that has been sitting in someone's files for years. Busch did not suggest he learned anything new about Nienstedt's behavior. No, in classic business fashion, Nienstedt simply became bad PR.

We should be concerned that the call for lay involvement in some circles is merely a stalking horse for promoting a conservative, anti-Francis agenda. The language used by some leading conservative prelates and leading conservative lay leaders is too similar as my colleague Brian Roewe demonstrates in an article here at NCR. Again, who whispered into Hugh Hewitt's ears?

It is impossible to analyze the sex abuse mess without concluding the core problem is a clerical culture that permits abuses of power. But, we must avoid dualism: It is not that clerics are bad and laypeople are pure. Bill Cosby and Harvey Weinstein are not men of the cloth. It is that the clerical culture reinforces a lack of accountability and transparency. In an otherwise fine commentary at La Stampa, Andrea Tornielli rightly calls for conversion, but we poor humans need culture to prod us one way or another. The "best practices" he seems to minimize as an obsession of Anglo culture are nothing more than ways of creating a culture that is more transparent and, consequently, more accountable.

We know what a genuine effort to combat clericalism looks like: Pope Francis has been waging that effort since the first moments of his papacy, when he asked the people in St. Peter's Square to pray over him before he imparted his first blessing. The key is to genuinely understand that the only heroic priesthood in the Christian Church is a priesthood of service, one that is allergic to judgment, one that accompanies everyone no matter their circumstance. But, the Church Militant-EWTN-Napa Institute crowd, they are not very enthusiastic about Pope Francis now, are they?

I do not know how the reckoning will play out. But, let's not be naive. People who have never before evidenced an ounce of concern for the victims of clergy sex abuse, who championed serial pedophiles like Maciel and criticized NCR for publishing stories about sex abuse, these same people are now frothing at the mouth, searching for episcopal scalps. As long as they confine their scalps to those prelates who support Pope Francis, we can guess their true, and evil, motives. Similarly, we will know that these conservatives are sincere in their campaign of accountability when they begin to examine the culpability of Pope John Paul II and his colleagues for this mess. In the meantime, and the time is very mean, we brace ourselves to our varied tasks, pray for the victims and their families, and renew the church by humbly trying to follow in the footsteps of the Master.

A version of this story appeared in the Sept 7-20, 2018 print issue under the headline: Critics wield grand jury report to advance anti-gay, anti-Francis agenda .

Your thoughts on voting restrictions