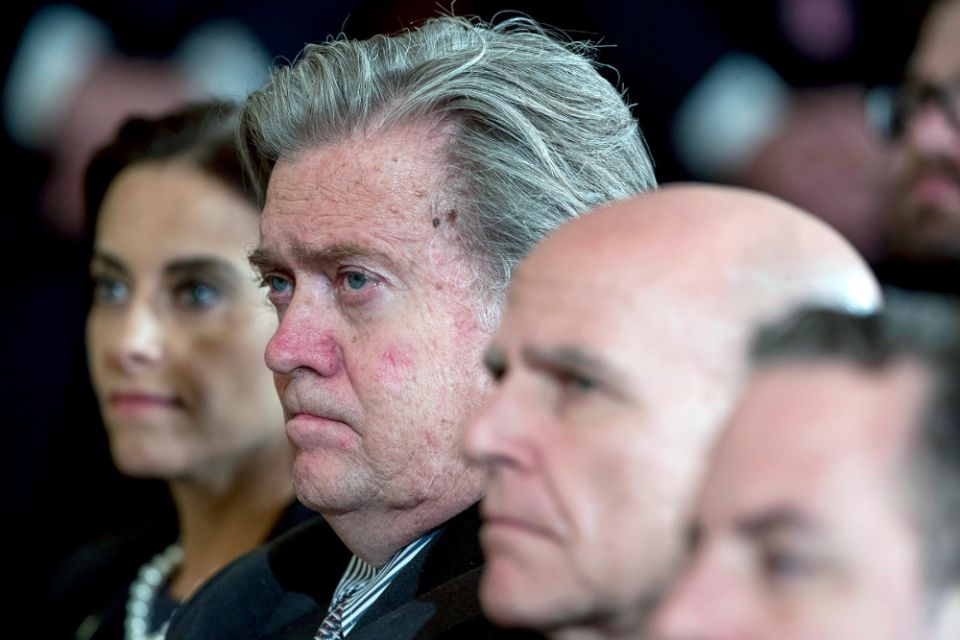 Former White House adviser Steve Bannon, second from left, in the East Room at the White House on April 12, 2017, in Washington. (AP/Andrew Harnik)

The Guardian reported Saturday that in 2016, former White House adviser Steve Bannon had advised Matteo Salvini, now the interior minister of Italy, to explicitly criticize Pope Francis' stance on migration, to see him as "an enemy." The article also explores the network of anti-Francis clowns, starting with U.S. Cardinal Raymond Burke, who are explicitly aligned with Bannon through his inappropriately named Dignitatis Humanae Institute. Salvini once posed with a T-shirt that read "Benedict is my pope," which is either a schismatic statement or a trafficking in the idea that Pope Benedict XVI's resignation (and therefore Francis' election) was illegitimate, the papal equivalent of arguing Barack Obama was born in Kenya.

Then on Sunday, Richard Engel began his show "On Assignment" with a segment on Bannon's attack on Francis. It was very well done. What shone through was Bannon's intellectual and moral superficiality, a glibness about things divine that was shocking, if not entirely surprising. For example, Bannon states that the administrative structure of the Vatican needs to change. He seems unaware that Francis has being trying to accomplish that exact thing for six years. When pressed, Bannon says that he is not talking about theology, he is worried about bankruptcy, caused by the clergy sex abuse crisis, that the money will dry up. It seems not to dawn on him that whatever fiscal bankruptcy the crisis causes, it is of far less concern than the moral bankruptcy the crisis exposed.

Engel, like the Guardian, shines a light on Bannon's allies. When Michael Voris, the head of Church Militant, talks about the need to "drain the swamp" at the Vatican because "there is a gay network running the Vatican," you felt for Engel: Was he trying to suppress a laugh or was he genuinely flummoxed? Fr. Robert Sirico of the Acton Institute admits he does not much care for Francis because the pope does not understand rich people, but he adds that Bannon is "not my cup of tea" and does not know him. Engel produces a letter from Acton's Rome office supporting Bannon's Dignitatis Humanae Institute and Sirico says that he has never seen this before. I believe him: Sirico is gullible about capitalism, but I do not think he is a liar.

The "Monastery of Bannonism" as Engel calls it gets a look: Here, Bannon explains, he will train a generation of gladiators to fight for the Judeo-Christian tradition. The simple people of the town in southern Italy where the monastery is located, people whose culture is entirely Catholic, are seen protesting Bannon's effort.

My favorite moment came at the very end when Engel asks Bannon if there has been any reaction from the Vatican to his work. He says there has not been but that there has been "an outpouring from lawyers and bankers" in the United States, asking how they can help. As we all know, in Luke 4, Jesus announces his ministry, saying he has come to "bring good news to the lawyers and bankers" or something like that. The comment reminded me that there was one name was missing from Engel's roster of Bannon's co-conspirators: Tim Busch, who links all these groups and some others.

The cancer of populist nationalism is spreading. It would be one thing is Bannon and Salvini were alone in their preference for racist nationalism and hostility to Francis. They are not. In the current issue of First Things, Matthew Schmitz stumbles into the worst kind of cafeteria Catholicism, one which, the name of his journal notwithstanding, overlooks first things in order to stay in line with President Donald Trump. After recounting how, as a young man, he favored immigration and tried not to judge his boss at a construction job who thought immigrants were taking Americans' jobs, and with the autumn returned to college where all his chums favored immigration too, he writes:

We stood on one side of a great divide in public opinion, a divide that pits elites against workers, those who benefit from immigration against those who do not. George ­Borjas, professor of economics at Harvard, has argued that increased immigration has immediate financial benefits for elites but provides little or no benefit to the working class. But the divide is cultural as much as economic: In both Europe and America, one side prizes national identity and citizenship; the other, mobility and openness.

You see the biggest problem at first glance — at least in America, our "national identity" is one of "mobility and openness." Other problems include the fact that other researchers argue differently from Borjas and the AFL-CIO, which represents more working people than any other organization in the country, has long since recognized that immigrants do not drive wages down for native born workers: Unscrupulous employers do that. Now, when you go to a rally in support of immigrants, you are likely to find union members in the frontlines.

But, the real problem with Schmitz' argument is that he seems not to notice he is placing the rights of the nation-state above that of the natural family. He writes:

Like all immigration idealists, [those of us who support less draconian immigration policies] they have forgotten simple truths. The state cannot arrest, prosecute, and punish lawbreakers, as it must do, without separating them from their families. Nor can it defend its borders without the use of force. In Christ, there is neither Jew nor Gentile, male nor female. In this world, however, the distinction between citizen and alien, like that between man and woman, will always remain.

And, I sure hope Schmitz never jaywalks or drives over the speed limit because, if his moral framework were adopted, the state could separate him from his family for doing so.

Schmitz justified his attack on "immigration idealism" by invoking Reinhold Niebuhr's criticism of pacifism in the face of Hitlerite aggression. The analogy is obscene on two fronts. First, refugees from Honduras are not Hitlerites and they have no panzers. Second, Schmitz is no Niebuhr. I will grant that the current moment puts one in mind of the 1930s in certain ways, but this is not one of them.

I can understand, even while I do not agree with, those whose moral disgust about abortion is so great they are willing to make a pact with the devil in order to secure a pro-life majority on the Supreme Court. They misunderstand politics and law — even after overturning Supreme Court precedents, abortion will remain widely available in this country.

What Bannon and Schmitz are doing, however, is something different. They are not holding their nose while embracing a putative champion of the unborn. They are defending the stench, making excuses for the policies which are so obviously opposed to Christian ethics and explicit Catholic teaching, feeding the tyrant and stoking the fear he uses to justify his repugnant policies. There is a word for such men: collaborators.

Conscience decides if a lawyer can defend someone like Harvey Weinstein