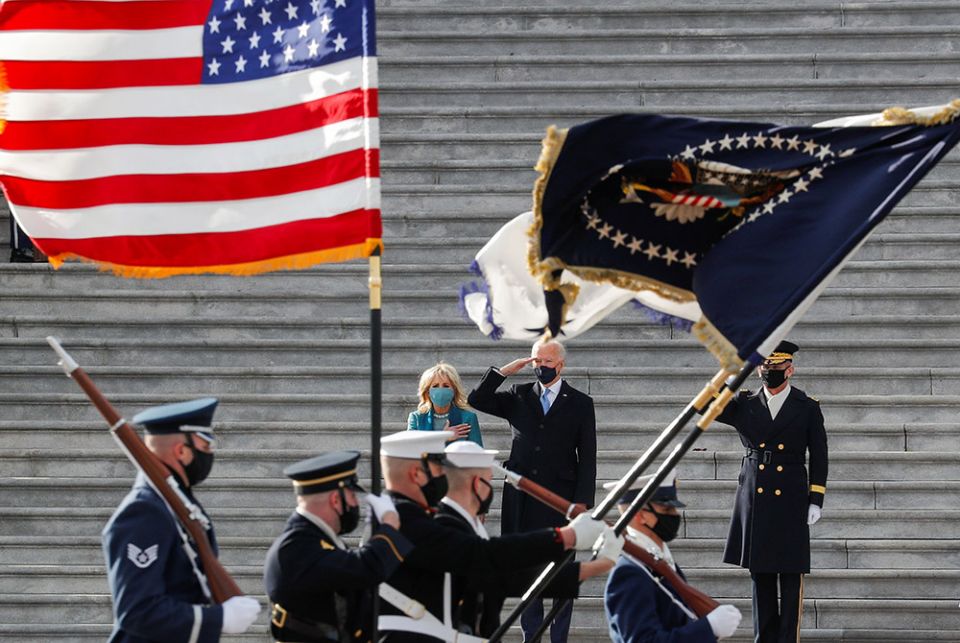 Last month, when the working group drafted, and conference president Archbishop José Gomez issued, that regrettable statement about Biden, the culture warriors in the church were elated, none more than George Weigel. He took to the pages of First Things to characterize the election of our nation's second Catholic president as "this unprecedented challenge to the Church's sacramental and moral coherence." Twice he called Biden's win "an inflection point" and asserted that "the Church's evangelical credibility was at stake."

The storming of the U.S. Capitol? The attempt to overturn the results of an election? The four years of anti-immigrant policies and rhetoric? The coddling of racists and white supremacists? None of those posed an inflection point for Weigel and his friends in the bishops' conference. But, elect a Catholic who holds an admittedly confused position on abortion? That requires not only a rude and ill-timed statement, but a new document reflecting on "eucharistic coherence," code for denying Communion to pro-choice politicians.

The phrase "eucharistic coherence" does not appear in the Second Vatican Council's Constitution on the Sacred Liturgy. For Weigel, it is clear, it means no Communion for pro-choice politicians.

Archbishop Joseph Naumann, chair of the U.S. bishops' Committee on Pro-Life Activities, agrees. In his sermon at the Vigil for Life last month, he said, "In effect, our Amen when receiving Our Lord is an affirmation that we believe and profess all that the Holy Catholic Church believes, teaches and proclaims to be revealed by God." But he wasn't talking about the Catholic Supreme Court Justices who looked the other way while former President Donald Trump and former Attorney General Bill Barr went on a killing spree among death row inmates in their final weeks of office.

To amplify the point, Naumann conducted an interview with Newsmax — Newsmax! — in which he again solemnly affirmed what we all know — that President Biden's position on abortion is not consistent with what the church teaches. And the archbishop repeated a claim that is simply not true: "He creates a real problem for the church in the United States because he's confusing people about what authentic Catholic teaching is." For years, when faced with this claim, I have asked what I thought was an obvious question: Does anyone really not know what the Catholic Church teaches about abortion?

The decision to turn the drafting of any statement about "eucharistic coherence" to a standing committee is a defeat for these two culture warriors and their allies in two ways. They were counting on the ability to ram their aggressive tactics through a working group — after all, an inflection point had been reached! The time was now! Standing committees take time. They tend to have extant relations with the relevant dicasteries at the Roman Curia that deal with the same area of competence. They have consultors with theological expertise. The documents they produce are brought before the full body and, if they are teaching documents, as this one necessarily would be, passage requires a two-thirds majority. The culture warriors know they lack that margin.

The second reason they needed to be able to avoid the normal channels for producing such a document is because closer examination of the issues exposes the many flaws in their simplistic approach. Of course, Biden is wrong about abortion and confused when he explains himself. I have never heard him try and confuse people about what the church teaches. He claims that he adheres to the church's teaching in his personal life but thinks he cannot impose belief on others. This is not a very sophisticated response. Biden is willing to "impose" his belief in a living wage on people who might disagree and frequently cites Catholic social teaching as the source of his ideas about social justice.

Biden's position, however, is no more unsophisticated than that of Weigel and Naumann. They gloss over the fact that the church's clarity about the morality of abortion does not yield a correlated clarity about the politics of abortion. Setting aside the fact that there is no agreement within the pro-life movement about what a pro-life legal regime would entail, there is the very regrettable but, I submit, undeniable fact that whatever political or legal "solutions" the culture warrior approach might yield in the years ahead will be swept away fairly quickly because they have been unable to persuade the culture that abortion is wrong. In fact, weaponizing the Communion rail will only further alienate those like me who consider abortion a grave affront to human dignity but not the only affront worthy of consideration when we step into the voting booth.

In the middle of this saga is Archbishop Gomez. I do not know him well, but I do not think you need to know him well to recognize that his is a gentle soul. The Inauguration Day statement, in its timing and its truculence, did not sound like him. I wish he had not allowed himself to be bullied into issuing it, or had consulted widely before doing so. Nonetheless, it is to his credit that, having recognized how many of his brother bishops were distressed by the statement, he seems to have understood the need to shut down the working group before it did any more harm.

So the bishops' conference has stepped back from the brink. I hope Gomez has learned that there are bullies around him who believe, as Weigel put it, "Maintaining a false façade of episcopal unity is not worth the sacrifice of the truths which the Church must speak." In fact, there are no truths of political strategy that the "Church must speak." Weigel's approach is rooted in strategy, not theology.

What is more, maintaining a true communion among his brother bishops has been one of the principal tasks of the leader of the conference, and has been since before there was a conference! On October 12, 1899, the archbishops of the United States gathered for their annual meeting. It was the first time they had met since Pope Leo XIII's letter Testem Benevolentiae, which condemned the phantom heresy of "Americanism." The bishops of the province of Milwaukee had written to Leo in terms that cast aspersions, indeed a suggestion of heretical thought, against some of their brothers, including the recognized leader of the American episcopate, Cardinal James Gibbons. Archbishops Patrick Riordan of San Francisco and John Ireland of St. Paul urged a forceful denunciation of the Milwaukee letter, but Gibbons refused to countenance the idea. Ireland reported him saying, "Peace, peace — death for the sake of peace."

That forbearance is an example the culture warriors will never learn or even appreciate. It strikes me as the kind of thing Gomez does grasp and, hopefully, will turn into his lodestar going forward.