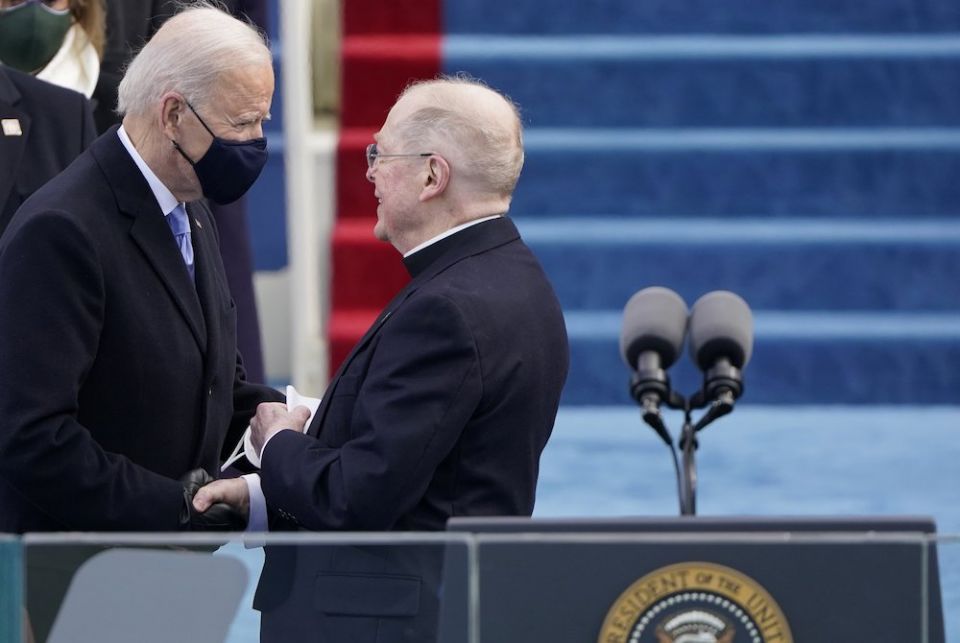 Wednesday, Jan. 20, was a very Catholic day. It began with the president-elect bringing the political leadership of the nation to Mass. Joe Biden walked into my old parish, the Cathedral of St. Matthew the Apostle, followed by the vice president-elect, the speaker of the House, and the majority and minority leaders of both chambers of Congress. After four years of a president incapable of not patting himself on the back in every public moment, it was a welcome change to see a president who is not afraid to go to Mass, where we begin by begging pardon and finish by receiving the gift of eucharistic grace.

The night before, Mr. Biden led the country in a short but poignant ritual of remembrance for those killed by the COVID-19 virus. Washington Cardinal Wilton Gregory, Biden's new pastor, offered a beautiful prayer to begin the ceremony. He prayed, in part, "Let us, with one heart, commend those who have died from this virus and all of their loved ones to the providential care of the One who is the ultimate source of peace, unity and concord." After what the country has witnessed in the past few weeks, how refreshing to be reminded that God offers "peace, unity and concord."

Once he had taken the oath of office, the new president gave a speech that was heavy on themes found on every page of Catholic social teaching: the dignity of the human person, the commission to serve the common good as the first justification of government, the value of democracy in protecting human dignity and both requiring and evidencing equality, the virtue of solidarity. How different from the dystopian inaugural address we heard four years ago, to say nothing of the speech that incited the mob to storm the U.S. Capitol two weeks prior.

The whole day was very Catholic, heavy on symbolism and ritual, much of it changed from the usual inaugural norms because of COVID-19 and because the outgoing president decided to throw a hissy fit and skip the ceremony, all of it speaking to values more pronounced in Catholic thought than in the classic liberalism of the founding fathers.

Yet, I was also reminded of how different Biden is from many liberals, Catholic and not, who do nothing but deride America and denounce her sins. Biden acknowledges those sins, to be sure, but he knows there is more to America than that. "Our history has been a constant struggle between the American ideal that we are all created equal and the harsh, ugly reality that racism, nativism, fear and demonization have long torn us apart," the new president said. "The battle is perennial. Victory is never assured. Through Civil War, the Great Depression, world war, 9/11, through struggle, sacrifice and setbacks, our better angels have always prevailed." Then, in a line that sounded like something Pope Francis would say, Biden added, "In each of these moments, enough of us, enough of us, have come together to carry all of us forward."

Apparently, the leadership of the U.S. bishops conference, before it had even heard the speech, chose to range itself among those unwilling to "come together to carry all of us forward." Los Angeles Archbishop José Gomez, president of the conference, issued a churlish statement. He acknowledged there would be areas where the bishops could work with the new administration but also warned that Biden had "pledged to pursue certain policies that would advance moral evils and threaten human life and dignity, most seriously in the areas of abortion, contraception, marriage, and gender." Gomez added, "Of deep concern is the liberty of the Church and the freedom of believers to live according to their consciences."

Inauguration days are not a time for "on the other hand" statements. 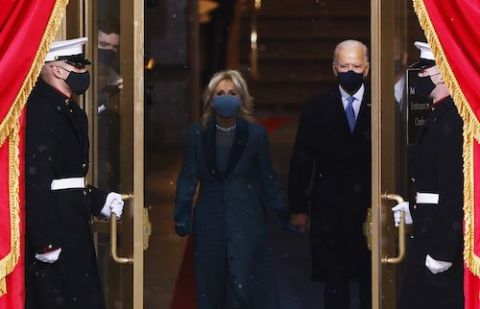 President-elect Joe Biden and his wife Jill Biden arrive at the U.S. Capitol in Washington Jan. 20, 2021, for his inauguration as the 46th president of the United States. (CNS/Reuters/Jim Bourg)

The worse lie came when Gomez said, "Catholic bishops are not partisan players in our nation's politics. We are pastors responsible for the souls of millions of Americans and we are advocates for the needs of all our neighbors." To be clear, the statement was political, not pastoral and, besides, Biden has a pastor and his name is Cardinal Wilton Gregory. His other pastor is Bishop Francis Malooly of Wilmington, Delaware. The conference has no canonical pastoral authority regarding Biden. Gomez's hiding behind that façade is an attempt to appear non-political, and it is not convincing.

It is impossible not to detect the influence of Archbishop Charles Chaput, the American Viganò, in Gomez's statement. In November, Chaput attacked Gregory on the subject of denying Communion to Biden. He, too, tries to hide his partisan attacks behind the curtain of pastoral solicitude. He, too, overlooked the gross depredations of Donald Trump, and about 90% of church social teaching, because the ex-president agreed with the bishops about abortion.

At best, the statement was tone deaf.

Turns out, some of the bishops also found the statement off-key. In a rare departure from a united episcopal front, Cardinal Blase Cupich of Chicago issued a statement of his own:

Today, the United States Conference of Catholic Bishops issued an ill-considered statement on the day of President Biden's inauguration. Aside from the fact that there is seemingly no precedent for doing so, the statement, critical of President Biden came as a surprise to many bishops, who received it just hours before it was released.

Thems fightin' words. Cupich also said the statement had not been discussed by the conference's administrative committee, which would be the "normal course for statements that represent and enjoy the considered endorsement of the American bishops."

I am sure the leadership at the bishops' conference would be treating any Democrat shabbily. But I think what makes them really crazy is the fact that they realize, at some deep unconscious level, Biden did more in 24 hours to remind the American people that the Catholic Church can be a force for good in our country than the bishops' conference has done in 10 years. His memorial service for COVID-19 victims was more pastoral than their repugnant statement. Biden's inaugural address was a better articulation of Catholic ideas about governance than any recent document from the conference. He cited Augustine to help unite our brutally divided country. They turn to citations that exacerbate the divide. Biden has allowed himself to be enriched by the faith of others, Catholic and non-Catholic. Gomez seems stuck in his Opus Dei playbook.

I wish to close my reflections upon the inauguration with a shout-out to three supporting actors in the day's drama, one of them a Catholic, one a new star, and the other a new American hero. Had the bishops waited to issue their offensive statement, they might have tempered their nastiness by the example of these three Americans. 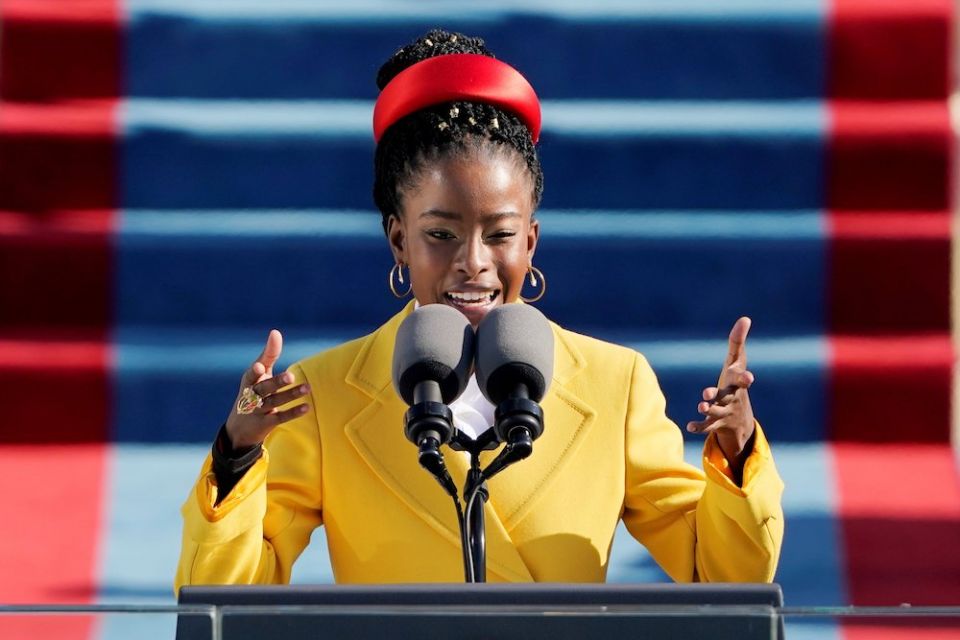 National Youth Poet Laureate Amanda Gorman reads her poem, "The Hill We Climb," during the inauguration of Joe Biden as the 46th president of the United States at the Capitol in Washington Jan. 20, 2021. (CNS/Reuters pool/Patrick Semansky)

Lady Gaga, who is Catholic, sang the national anthem, and she knocked it out of the park. When she got to the words "our flag was still there," she turned and looked up at the flag atop the U.S. Capitol. Two weeks prior, the insurrectionists had stormed the very spot where Lady Gaga was singing. One of the most pitched battles between the mob and the U.S. Capitol Police happened in the arched doorway through which the inauguration guests walked to their seats. The mob had wanted to tear down democracy when they stormed the Capitol. It had last been stormed by British troops whose attack on Baltimore inspired the writing of our national anthem. Yet, the flag was still there. It was a powerful moment, a redemptive moment.

Amanda Gorman, a National Youth Poet Laureate, delivered a poem that was stunning in its energy and beauty. The poise of one so young could not have contrasted more starkly from the images of the crude and crass Trump backers who had defiled the Capitol during the insurrection. Her words spoke of healing and, like a sacrament, they effected what they signified. Gorman is a star, and her performance at the inaugural will be remembered for many years when her future artistic efforts capture our hearts again. She may not be Catholic, but I think of her now as an honorary Catholic.*

Earlier in the ceremony, Vice President Harris had been escorted by Eugene Goodman, the Capitol Police officer whose quick thinking led the mob away from the Senate chamber on Jan. 6. We now know the mob was only a few yards and a few seconds from Vice President Mike Pence and his family. They were chanting their intention to hang him. The presence of this new hero at the inauguration also had a redemptive quality to it.

For millions of Americans, Wednesday had the feeling of a great deliverance, the closing of an ugly chapter in American history, the happy turning of a page. Gaga, Gorman and Goodman helped to reclaim the building that was, two weeks ago, a crime scene. But Biden was the man of the hour, and his Catholic faith was evident in the way he rose to meet the moment. The bishops may not have realized that. They can go pound sand. Most of us are profoundly grateful this good and decent man is now our president.

* Editor's note: After publication of this column, NCR learned that Gorman is Catholic and a member of St. Brigid Church in Los Angeles.

Related: Dueling statements from US bishops, pope on Inauguration Day