Bolstered by bad eucharistic theology, the 'wafer wars' are back 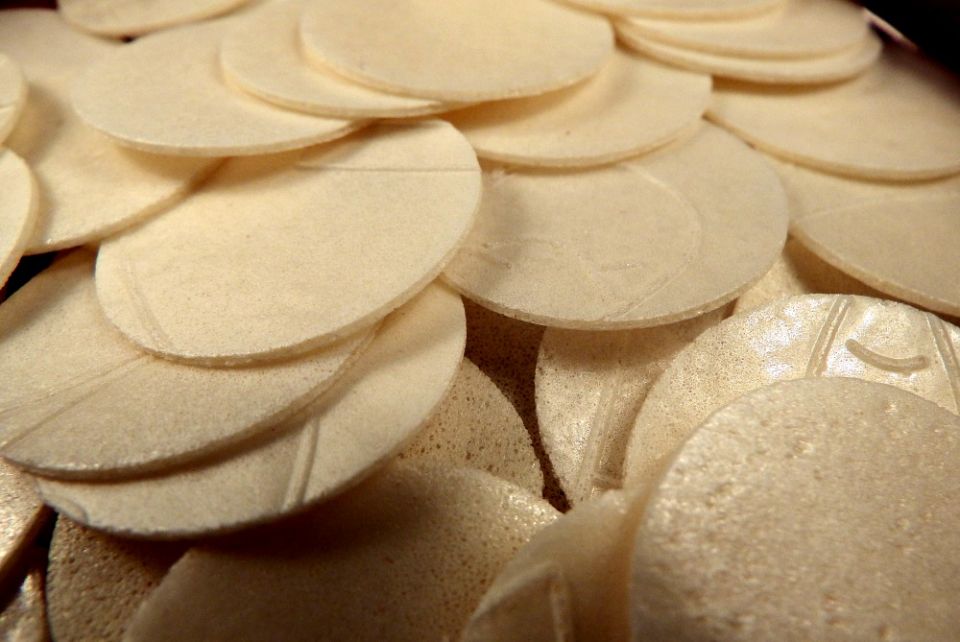 Ugh. The "wafer wars" are back. Nothing so exemplifies the culture warrior approach as the denial of the Eucharist to pro-choice politicians, and that approach has failed as an ecclesial proposition. If the goal was to turn the Catholic Church into an arm of the Republican Party and to cause left-leaning Catholics to find something else to do on a Sunday morning, the approach has succeeded.

In a statement to the media, Fr. Robert Morey said: "Sadly, this past Sunday, I had to refuse holy Communion to former Vice President Joe Biden. Holy Communion signifies we are one with God, each other and the church. Our actions should reflect that. Any public figure who advocates for abortion places himself or herself outside of church teaching." Thus, Fr. Morey.

None of us is ever completely "one with God" this side of the abyss. As Pope Francis explained in the famous footnote 351 in Amoris Laetitia:

In certain cases, this can include the help of the sacraments. Hence, "I want to remind priests that the confessional must not be a torture chamber, but rather an encounter with the Lord's mercy" (Apostolic Exhortation Evangelii Gaudium [24 November 2013], 44: AAS 105 [2013], 1038). I would also point out that the Eucharist "is not a prize for the perfect, but a powerful medicine and nourishment for the weak" (ibid., 47: 1039).

The Holy Father's words about both sacraments remind us, or should, that the principal agent in the Eucharist is not the priest, nor the communicant, but our great and merciful God.

But let us set aside Morey's lousy theology. Is it true to say that Biden "advocates for abortion"?

It is true to say that Biden believes government should leave the decision whether or not to procure an abortion to the mother. I disagree with his stance and would support the kinds of limits on the availability of legal abortion that are common in Europe, permitting the procedure before 12 or 14 weeks of pregnancy but strictly limiting thereafter.

I hope someday changes in the culture will bring us to the point where abortion will be unthinkable in all circumstances, but we are not there. I am certain that Biden's posture does not hasten the day when we will get there, but neither has the pro-life movement demonstrated any awareness of what it will take to make abortion unthinkable. Hint: It will take more than overturning Roe v. Wade.

My disagreement with Biden, then, is not whether or not abortion is moral. It is certainly worthy of note that abortions tend to go down when a pro-choice Democrat is in the White House. My difference is that I think the unborn — like all marginalized persons, including immigrants and refugees — deserve legal protection in a just society. I will never abandon that belief. It always baffles me a bit that Democrats are so deaf to its obvious moral value, but I recognize, too, that pro-choice politicians adopt their stance out of sympathy for women facing an unwanted pregnancy.

If the pro-life movement had demonstrated a similar sympathy from the start of this public debate, we might be closer to that day when abortion was unthinkable or, at least, far less prevalent.

James T. Keane, writing in America, did a fine job presenting the "on the one hand/on the other hand" arguments contained in canon law. Canon 912 states: "Any baptized person not prohibited by law can and must be admitted to holy communion." But Canon 915 states: "Those who have been excommunicated or interdicted after the imposition or declaration of the penalty and others obstinately persevering in manifest grave sin are not to be admitted to holy communion." NB: Particular canons are easily accessed at the Vatican website here.

In this case, the former vice president has not been excommunicated, nor is he under any interdict, so the issue is what constitutes "obstinately persevering in manifest grave sin." It would seem quite obvious to all that this is not such an easy thing to determine and so the self-assured defenders of denying Communion to politicians are suspect precisely because they are so certain in their sweeping claims.

Keane also correctly pointed the conversation toward the beginning of the Code of Canon Law in which the nature of ecclesiastical law is discussed. Canon 18 reads: "Laws which establish a penalty, restrict the free exercise of rights, or contain an exception from the law are subject to strict interpretation." That is to say, those making close calls should err on the side of mercy.

Canon 27 further clarifies this gnarly situation: "Custom is the best interpreter of laws." It has not been the custom in this country to deny Communion to politicians whose public votes require a great deal of prudential judgment, as well as respect for those fellow citizens whose moral teachings differ from our Catholic teachings.

Further, in the introduction to the code, we read: "To foster the pastoral care of souls as much as possible, the new law, besides the virtue of justice, is to take cognizance of charity, temperance, humaneness and moderation, whereby equity is to be pursued not only in the application of the laws by pastors of souls but also in the legislation itself." It is hard to see how denying Communion to someone about whom you know only their voting record, whose confession you have never heard, whose friendship you do not enjoy, meets the standard of moderation or charity.

I do not know Morey. I hope he is a good pastor of souls to those in his parish. But he is wrong on the law, wrong on the facts, and wrong on the theology of the Eucharist.

A judgmental priest is an unpersuasive priest. If there is any scandal in this situation, it is not that giving Communion to Biden will lead people to think that the Catholic Church is indifferent on the issue of abortion. The church's teaching is well-known and decidedly clear. What it has lacked is the ability to find a way to persuade those who do not share our moral belief. Denying Communion to Biden will not ameliorate that lack. It will accentuate it.

Column | Bolstered by bad eucharistic theology, the 'wafer wars' are back