Doug Jones won a Senate seat, but what did we learn from the election? 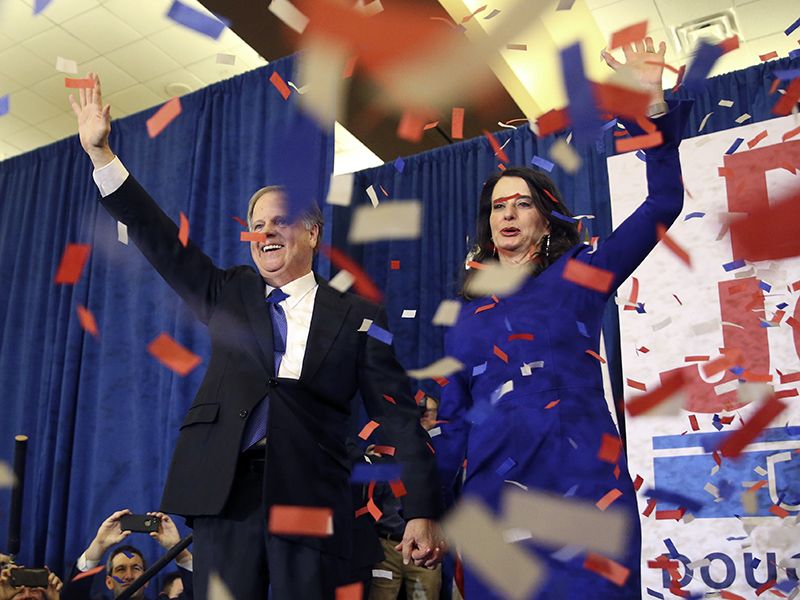 Be prepared to hear a lot of nonsense over the next few days as pundits dissect the results from Alabama's Senate race. Yes, Doug Jones won, beating Roy Moore by a margin of a few thousand votes, but special elections are poor indicators of voting behavior in general elections, and this race was strange in many, many ways.

The idea that Alabama would elect a man who had been credibly accused of child molestation would strike most people as preposterous. The idea that Alabama would elect a pro-choice Democrat was almost equally preposterous. Yet, that was the choice. As Chuck Todd noted on "Meet the Press" Sunday, if Jones had been a pro-life Democrat, like Gov. Jon Bel Edwards in nearby Louisiana, this race would not have even been close: Jones would have been ahead by 30 points.

Democrats continue to misunderstand the abortion issue: Last night, Tom Perez continually referred, negatively, to "single issue voters" but abortion is not just one issue. It is a signpost for an entire worldview, and it is such to both liberals and conservatives. Look at this essay by Jessica Winter in The New Yorker. Could a commentary be more tone deaf to the moral concerns many of us hold about abortion? For example, she states: "It is now beyond cliché to point out that, as espoused by the Republican Party, the pro-life position is more precisely described as pro-birth." Pro-birth? Is anyone opposed to birth? Does Winter not know any couples who have struggled to have a child and wonder how this clunky hyphenated expression would ring in their ears?

The biggest loser was the Republican Party. Steve Bannon backed Moore against incumbent Sen. Luther Strange in the GOP primary, and campaigned for Moore throughout the campaign. Within minutes of the race being called, Sen. Majority Leader Mitch McConnell's PAC issued a statement blaming Bannon for costing the GOP a Senate seat in one of the reddest states in the country. The civil war within the Republican Party will only get nastier. That said, big winners last night were GOP Senators Susan Collins, Bob Corker, Jeff Flake and Lisa Murkowski. McConnell can only afford to lose one of their votes.

This is not to say last night was a big win for the Democratic Party. They could barely beat someone whom a majority of voters believed was a pedophile. To think that last night's results presage a resurgence of Democratic prospects in the South would be a mistake, which did not prevent many pundits for suggesting that was the case. Next year, the Democrats have to defend twice as many Senate seats as the Republicans and winning control of the Senate will be difficult.

It will be very interesting to evaluate how different pollsters anticipated the makeup of the electorate. Heading into the race the polls were all over the place. The RealClearPolitics average showed a dead heat with Moore leading by 2.2 percentage points, well within the margin of error. But that statistic is misleading. Moore was leading in five of the eight polls taken in the last few weeks, by margins of four to 10 points. One poll was a tie. Jones led the other two polls, one by three points and the other by 10 points. Some of that wide disparity might be due to polling methodologies: The Fox News poll that had Jones up by 10 used a combination of landlines and cellphones while the Emerson poll that had Moore up by nine used landlines and online surveys. In any event, polling for a special election is notoriously challenging and going into election day precisely no one had any idea how this race was going to play out.

The exit polls were only a tad more clarifying. Fifty percent of voters believed the allegations of sexual misconduct against Moore were true, while 44 percent said they were not. Curiously, 72 percent of white evangelicals said the allegations were not true, and white evangelicals were 43 percent of the electorate. I suppose if you are trained to distrust the theory of evolution, and deny man-made climate change, disbelieving the allegations against Moore was not such a stretch. On the other hand, the headwind for Jones was that 54 percent of yesterday's voters thought abortion should be illegal and only 40 percent thought it should be legal.

The other obvious thing from the polls? Nobody, Democrat or Republican, likes the Senate Majority Leader!

Much attention will be placed on how much money was spent in this race, especially by the Doug Jones campaign. According to the Center for Public Integrity, some 22 independent PACS were pouring money into Alabama, and doing so sufficiently close to the election to avoid having to disclose their donors. One new group, Route 31, reportedly spent millions on television advertising for Jones. The National Rifle Association entered the race late, sending postcards in support of Moore in the last week of the campaign. According to this report in Newsweek, Jones spent $12 million and Moore spent $5 million. I find myself deleting half a dozen email solicitations from different political organizations even though I have not donated to any campaign or political group since I became a journalist ten years ago.

Nonetheless, I tend to think the influence of money is overvalued in high profile races such as this. Is there anyone in the country who has not heard of Roy Moore and of the allegations against him? Whatever their reaction to that information, from dismissing the allegations as false to believing him to be a dirty old man, I don’t see how that initial reaction will be changed by a 30 second spot.

Of course, the biggest winner was Doug Jones. He is going to become a U.S. Senator. Despite all the money coming in from outside, he continually emphasized he was running as if he was Reese Witherspoon’s brother in “Sweet Home Alabama.” Despite attempts to paint him as a big liberal, he was a prosecutor by profession. If he votes for a bill that would limit late-term abortions, he might even win reelection in 2020. Most importantly, he and the voters of Alabama saved their state and the country from the embarrassments a Senator Roy Moore would have been.

Column | Doug Jones won a Senate seat, but what did we learn from the election?