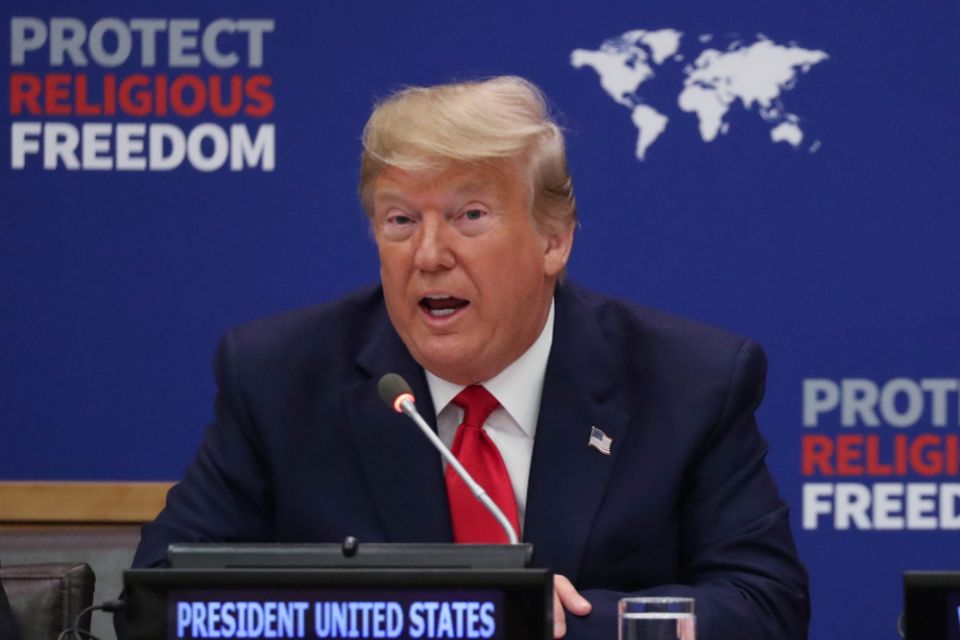 Impeachment is a horrible thing. I remember the afternoon President Bill Clinton was impeached. I had been watching the vote on the television in the office where I worked, and then went downstairs. I was pouring a cup of coffee and related what had just transpired to one of the waitresses. She was not particularly interested in politics, but she burst into tears. She knew that somehow this was horrible.

Impeachment, however, is not the most horrible of things. There are some things that are worse and one of those things is for an officer of the government to importune a foreign official to conduct an investigation against one of that officer's political opponents. Using the great power the Constitution vests in the presidency to obstruct justice is another much worse thing. And, we now know our president did both. The ethical corruption of Donald Trump is, apparently, limitless.

On Wednesday, the White House released a memo regarding Trump's conversation with Ukrainian president Volodymyr Zelensky. The memo, not exactly a transcript, of the conversation included Trump's request for "a favor" and these words:

Trump and his supporters insist he did not threaten to withhold aid. He did not have to do so. He had made sure Zelensky was aware of the assistance the United States was giving his country, comparing it favorably with the aid coming from other European countries. Needless to say, Trump does not have to tell anyone he is thin-skinned, erratic and not afraid to personalize foreign policy. That fact is well known.

The conversation between Trump and Zelensky so disturbed an intelligence official that he or she filed a whistleblower complaint. Reading the complaint is like reading a screenplay for "The Godfather IV." As disturbing as the contents of that complaint are, just as worrying is the fact that the Justice Department did its best to bury the complaint and keep it from Congress. There is fodder here for a fresh batch of subpoenas and about which it will be increasingly difficult to plead executive privilege.

I am sure that Trump's request for foreign help in sliming a political opponent constitutes a violation of campaign laws. But, I think it is damned close to treason, too. The premise of our Constitution is that the American people get to select the government. Inviting foreign interference in that process is just about the most destructive thing I can imagine. Whatever you call it, our conservative friends have an opportunity to dust off one of their main concerns of yesteryear, a concern that society was defining deviancy down. Trump epitomizes that phenomenon. Besides, as Catholics, we have a body of teaching about the purpose of government, the moral demands of the common good, the need to assist those — individuals and countries — that struggle. We are way past the point at which one can argue Trump gets a pass on any of this because he appoints pro-life judges or has issued some helpful executive orders concerning religious liberty.

If you have been watching Fox News the past week, you will know that they are peddling a different narrative. To them, because there was no explicit quid pro quo in this conversation, then Trump's call was "perfect." They allege it was Biden whose 2016 conversations with the Ukrainians were out of bounds because he was threatening to withhold aid if the Ukrainian government did not relax pressure on a company that employed Biden's son, Hunter.

In fact, Biden was delivering a message on behalf of the U.S. and our allied European governments, calling for the Ukrainians to get tougher on corruption in part by sacking a prosecutor who was asleep at the wheel. As David Graham at the Atlantic explained: "There is still more to be learned about both the Biden and, crucially, the Trump cases, and new information could change the picture, but as it stands now, the essential difference is that Biden's intervention was aimed at fighting corruption in Ukraine, while Trump's appears to have been engaging in it." The Fox News narrative is a modern, semi-adult version of the schoolyard taunt, "I know you are, but what am I?"  That said, shame on Hunter Biden for not taking an honest job like bartending or carpentry, although the father of Ivanka, Don Jr. and Eric can scarcely be the one to mount a campaign against nepotism.

Watching the coverage as the story unfolded, I kept wondering why on earth the White House released the transcript. Then it hit me: At this point in his term, the president is surrounded only by sycophants and incompetents. They probably believed that his claim — "the call was perfect" — would suffice and, at any rate, who will risk his wrath to question his judgment? The presidency is no place for an amateur hour.

Yet, I fear greatly that if the Congress pursues impeachment, it could backfire and help Trump win a second term. Billionaire presidential candidate Tom Steyer started running ads calling for Trump's impeachment long before there was evidence, not just inferences, of criminal behavior. Rep. Brad Sherman introduced articles of impeachment more than two years ago and has, in various interviews, given half a dozen reasons for impeaching the president. If the Democrats proceed with impeachment and it backfires politically, it is men such as these who should shoulder the blame. The only reason, repeat only reason, to impeach a government official is because they broke the law, not because they are racist, or pursue unjust policies, or demonize people, or any other reason. One of the reasons Trump's complaint that the Democrats are engaged in a witch hunt has found traction is because some of them provided grist for that mill.

Speaker of the House Nancy Pelosi, correctly, has been very reluctant to go down the impeachment road. One wag suggested she has been giving the U.S. bishops a lesson in synodality. She waited until Democrats who won districts that Trump carried in 2016 were ready before she agreed to move forward. Seven of those freshman Democrats, all of them military veterans as well, took to the pages of the Washington Post Monday to say that Trump's latest breach of Constitutional norms did cross the line and is an impeachable offense.

Pelosi may need moderate Democrats to move forward but the country needs congressional Republicans to stand up and honor the oath of office they took to defend the Constitution. Attorney General William Barr is surely not going to protect the Constitution from his boss. And Rudy Giuliani is fast becoming a caricature of himself.

How will it end? Ask Shakespeare. We have left the world of politics and history and ethics which I have studied all my adult life and entered the world of tragicomedy. Please God, let a way be found to bring the curtain down on this disaster of a presidency.