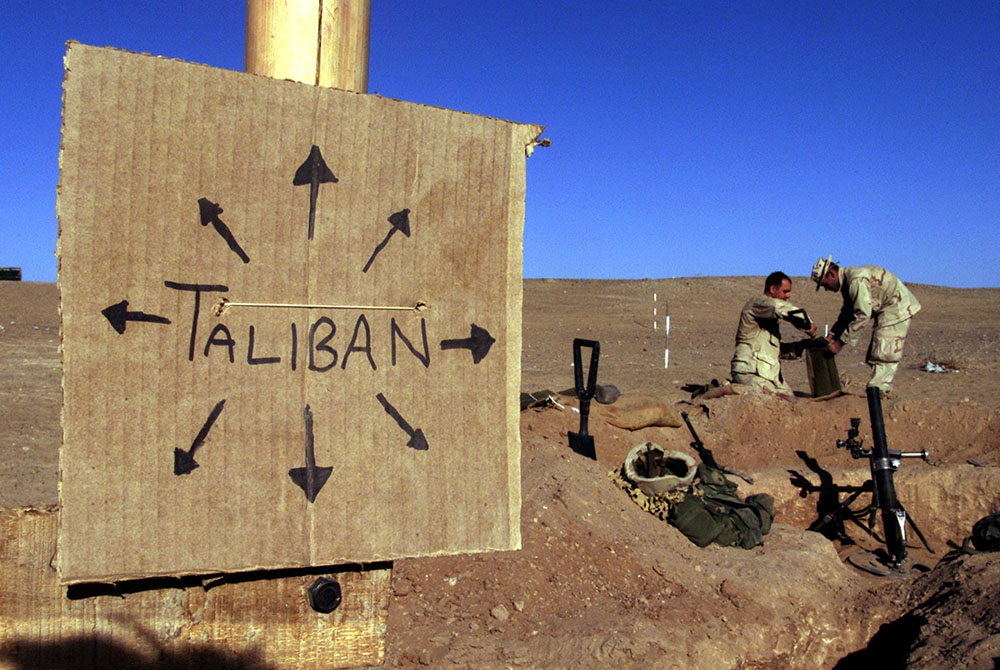 Marines from Charlie 1/1 of the 15th Marine Expeditionary Unit in southern Afghanistan fill sandbags around their light mortar position on the front lines of a Marine Corps base Dec. 1, 2001. (CNS/Reuters/Jim Hollander)

"The Lord is close to the brokenhearted," sings the psalmist. "And saves those who are crushed in spirit" (Psalm 34:19). This weekend, the Lord was busy being close and saving.

On Saturday morning, a 7.2 magnitude earthquake struck western Haiti, a country mired in poverty and engulfed in political turmoil after the recent assassination of the nation's president. The death toll surged past 1,400 and was sure to climb. By Tuesday morning, Tropical Depression Grace was dumping heavy rains on Haiti, further imperiling rescue efforts and spreading additional suffering.

While the earth shook in Haiti, on the other side of the globe, tremors of a different sort were striking another country that has been beset by war for the past 20 years.

As the United States prepared to withdraw its troops from Afghanistan, and offering safe harbor to those Afghans who helped our troops, provincial capitals throughout the country were surrendering without a fight. By Sunday morning, the Taliban were in Kabul. By Monday, U.S. forces controlled about half of the airport and that was all.

Intelligence experts may have known this outcome was likely, but the average American was taken aback by the suddenness of the Taliban's ability to take control of all of Afghanistan. I certainly hoped that the young women attending schools in the capital city would be able to do so for some time, protected in Kabul at least by the government's well-trained and well-armed troops. Instead, we all watched in horror as they sent messages of fear and dread to the outside world, waiting for their hopes to be crushed.

Or worse. Last month in the provinces of Badakhshan and Takhar, Taliban commanders demanded the names of girls over the age of 15 and widows under the age of 45 who were eligible to be given to Taliban fighters. Sexual slavery on a mass scale is too horrible to contemplate but it is real and it is about to get much, much worse.

At The New Yorker, the daily cartoon Monday night showed a couple watching TV and the caption read "Would you mind if I changed the channel to check on the other disasters?" 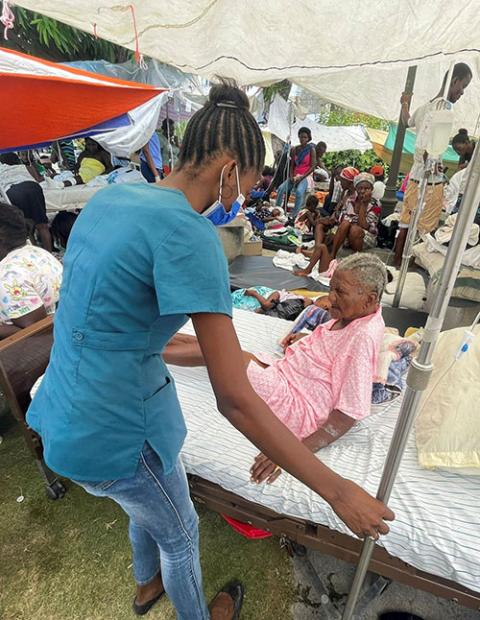 A woman is assisted by a member of the medical personnel outside a hospital in Les Cayes, Haiti, Aug. 16, following a magnitude 7.2 earthquake two days earlier. (CNS/Reuters/Ricardo Arduengo)

The two disasters this weekend, of course, are vastly different. Natural disasters are a variety of ontic evil, and whatever moral responsibility exists rests with those who have abetted Haiti's poverty and therefore made it almost uniquely ill-suited to cope with a natural calamity. There is one thing we all can do: Go to Catholic Relief Services and make a donation to help the struggling people there.

In Afghanistan, the brutality of the Taliban overcame whatever doubts the Afghan people had about the group's ideology. After President Donald Trump inked a deal with the Taliban promising to withdraw troops, it became clear America was leaving, and Afghan soldiers began cutting deals with the Taliban; that is, they did whatever they thought would best keep their family safe.

The United States tried to succeed in subduing the country where Britain and the Soviet Union had failed before. All three imperial powers thought bringing Western values would triumph — and all three were wrong. If breaking empires was an Olympic sport, the Afghanistan team would always win the gold medal.

Back in Washington, if there were an Olympic medal for blame throwing, it would be a close contest. If there is to be blame, then all should get their share of it. Congress ducked reclaiming its constitutional power over war. Three presidents prosecuted a war that was ill-conceived and for which there was never a plausible exit strategy. The military establishment tried a variety of approaches and now needs to conduct the kind of review it undertook after the loss in Vietnam.

The strategies were implausible because their strategic objectives were impossible to attain by military means. As Lt. Col. Jason Dempsey told The Washington Post, "We assumed the rest of the world saw us as we saw ourselves. And we believed that we could shape the world in our image using our guns and our money."

Both assumptions were tragically wrong. We could bring bombs. We couldn't bring the habits of democracy.

Before anyone assigns blame, however, it is important to recognize the degree to which there were never, ever any good choices. President George W. Bush needed a forceful response to the terrorist attacks on Sept. 11, 2001. He may have gone into Afghanistan in the wrong way, deposing the Taliban regime instead of merely attacking al-Qaida, but very few questioned the choice at the time. What is more, the ousting of the Taliban happened so quickly, his administration felt they needed a fuller response to Islamic radicalism and undertook the disastrous war in Iraq.

President Barack Obama authorized a troop surge that led primarily to a corruption surge throughout the Afghan government. The Taliban bided their time until the surge was over, a classic military tactic dating back at least to the American Revolution when George Washington did the same.

Trump excluded the Afghan government from negotiations with the Taliban to end the war, and accompanied the negotiations with increased bombing throughout Afghanistan, each bomb creating more martyrs for the Taliban and often killing civilians and turning them against the foreigner. He drew down our troop presence massively.

President Joe Biden could have abrogated the deal and continued the war. We still have approximately 28,500 troops in South Korea and that war ended in 1953. The terms of that war were set during the Cold War, and North Korea has patrons the Taliban lacks. If there was any prospect of liberalizing Afghan society, it might have been wise to keep troops there indefinitely. There was no such prospect.

If the primordial sense of liberty is a negative one — the desire to have a boot lifted off one's neck — it is also the case that a foreign boot is almost always resented more than a domestic one. Does this mean we should abandon liberal internationalism? Of course not. It does mean that we need to be less hubristic about our ability to bring liberalism to cultures that do not recognize or desire the values liberalism confers.

If you doubt the Catholic Church's doctrine of original sin, you have only to look at the past 20 years. There have never been good options in confronting Islamic terrorism. Soldiers for whom martyrdom is a desirable goal will always have an advantage over soldiers who desire to go home to their children when their deployment is done. Fanaticism, when it turns violent, demands a violent response, but violence usually exacerbates fanaticism and almost never denudes it, let alone defeats it.

Samantha Power titled her book about genocide and how America should respond to it "A Problem from Hell". Sadly, genocide is not the only such problem.

"Vanity of vanities, all is vanity," the Scriptures admonish us (Ecclesiastes 1:2). This is a time to learn to take that lesson to heart.