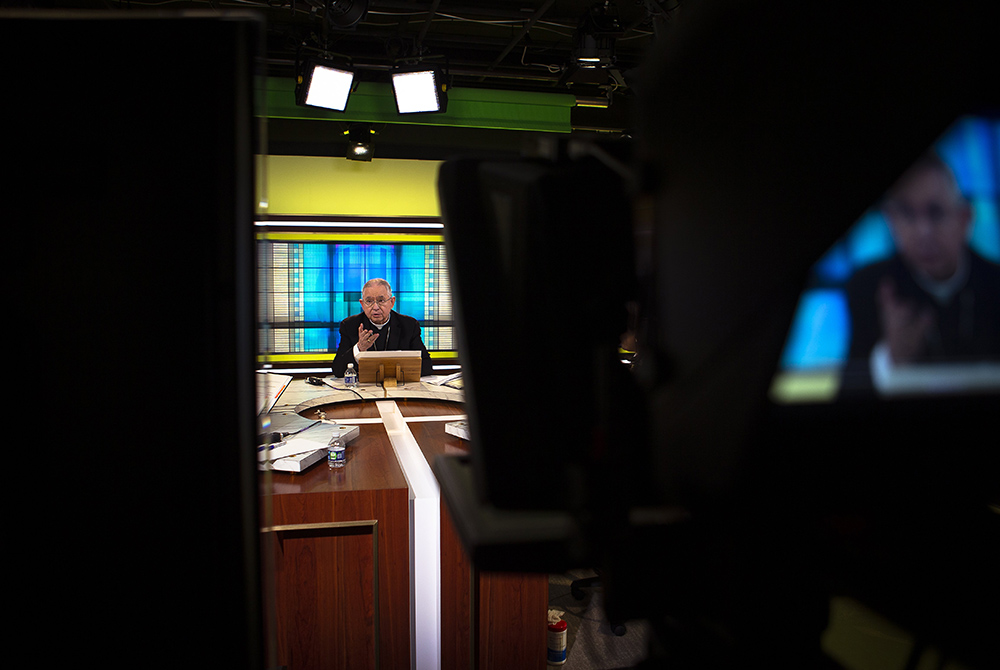 Archbishop José Gomez of Los Angeles, president of the U.S. Conference of Catholic Bishops, holds a news conference at the USCCB headquarters June 16 in Washington, the first day of the bishops' three-day spring assembly, held virtually due to concern over COVID-19. (CNS/Tyler Orsburn)

On Monday, NCR published an interview with theologian Rafael Luciani, conducted by his Boston College colleague Hosffman Ospino. The two discussed synodality, which has emerged as one of the most important reform efforts that Pope Francis is trying to bring to the universal church. Luciani, who is a theological adviser to the Synod of Bishops, did a fine job explaining what synodality is and why we should all be excited about it.

Now for the bad news. There is very nearly nothing about the Catholic Church in the United States that prepares us to engage synodality with the kind of fulsome embrace it requires. We — the bishops, the clergy, religious, theologians and the lay faithful — all have a lot of work to do.

For example, in discussing the post-conciliar development of CELAM, the continent-wide supra-conference of bishops for Latin America and the Caribbean, Luciani distinguishes between collegiality and synodality, stating:

The profoundly pastoral and missionary manner in which the church operates in the region should not surprise anyone. This has allowed more openness to the synodal way, compared to similar bodies of bishops in other parts of the world. Thanks to this spirit, synodality permeates the practice of collegiality.

He made a similar distinction in discussing the role of Sr. Nathalie Becquart, the undersecretary of the Synod of Bishops secretariat in Rome. "Remember that the Synod of Bishops is a collegial structure (i.e., among the body of bishops) and Sister Nathalie participates and cooperates with this collegial body as a layperson," he says. "It is a positive and necessary step, yet the structure of the synod remains collegial."

Collegiality presumes a college and it does characterize part of the history of the American Catholic Church. Bishops gathered during the 19th century, first in provincial councils in Baltimore, later in three plenary councils. There were theological and canonical advisers but it was the bishops who made the decisions and, what is more, used their decision-making power in decidedly non-synodal ways.

For example, the lack of canon law in the U.S. meant that priests had very few rights and, when the clergy felt bishops had acted improperly to them, they appealed to Rome. Throughout the century, Rome encouraged the bishops to adopt legislation that would create permanent pastors with canonical rights, and each time they resisted. Even at the Third Plenary Council, which Rome initiated in part to deal with this problem, the bishops refused to go beyond the creation of irremovable rectors for a few principal churches in their dioceses.

The pre-Vatican II church in the United States was the time of episcopal princeliness: Mansions were built to house bishops who were powerful actors in their local communities. Msgr. John Dunn of New York City described an appearance at a 1918 Irish American rally by Cardinal William O'Connell of Boston, writing to a friend:

The centre of attraction naturally was the Czar of all the Russias and he sure did look the part. Dressed in full uniform and with his usual bearing of lofty virtue and pained toleration of plebeian conditions, he stood out the central figure in the moving drama…his presence [was] impressive just as an elephant is impressive.

The lay faithful of the time, mostly first- or second-generation immigrants, were expected to "pray, pay and obey," and for the most part that is what they did. Seminaries taught a kind of vocational education, with little theology beyond what was needed to hear confessions.

Lack of theological sophistication was no impediment to careerism: At Vatican II, when some prelate first discussed the "college of bishops," Cardinal Richard Cushing of Boston was heard to say that if the bishops needed a college, he would pledge a million dollars to build it. Cushing embodied the "brick and mortar" managerial style that was considered essential in selecting members of the hierarchy.

The pre-conciliar church may have looked and acted in a triumphalistic manner, but it was not as vibrant as it seemed. In the urban, ethnic ghettoes of the late 19th and early 20th centuries, the church was the central institution conferring identity while assisting with assimilation. After World War II, when Catholics moved out of the ghetto and up the socio-economic ladder, the church lost its grip on many of its members in the U.S. As the age of mass marketing began, Catholics, like other Americans, fashioned their own identities; their faith, a received identity, was little match for the protean sensibilities of modernity.

Vatican II aimed at renewal and Luciani argues that the council remains a key reference point for understanding synodality, and that synodality remains key to achieving a deeper reception of the council. He is undoubtedly correct on this point, which is one reason so much of the opposition to Vatican II is found in the U.S. where synodality never really took off. That opposition was muffled in the pontificates of John Paul II and Benedict XVI, both of whom were seen, sometimes erroneously, to be rolling back the council in significant ways. Pope Francis has resisted the urge to consolidate and, instead, pushes the church forward, always forward, recognizing how much more there is to receive from Vatican II. 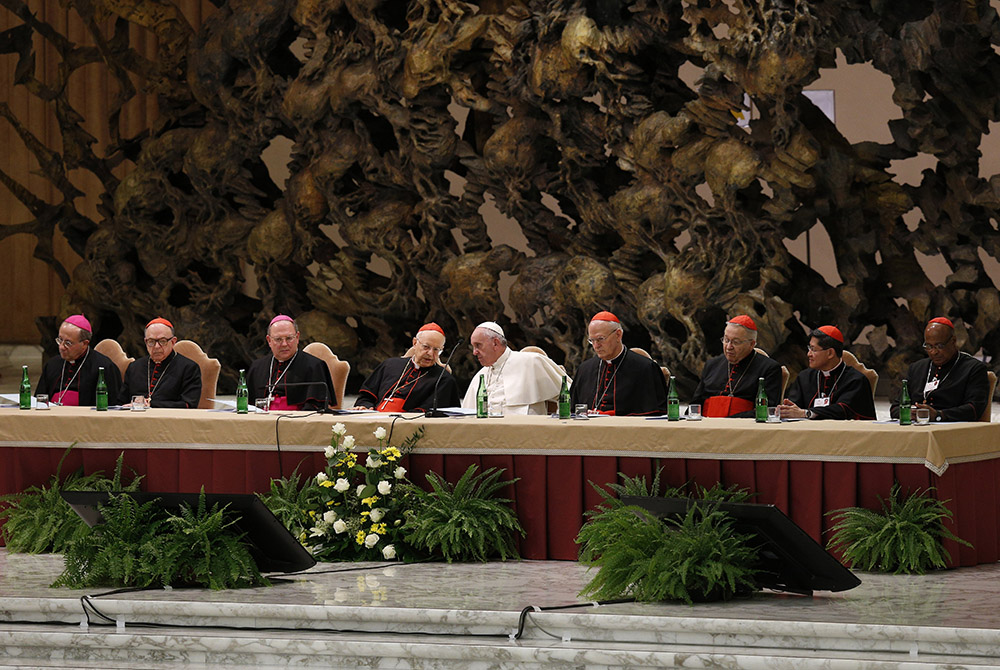 Luciani identifies a critical problem here. "To understand synodality, we must return to the text and the spirit of Vatican II," he says. "It is my observation that in many seminaries and faculties of theology the documents of the council receive little attention. How can pastoral leaders and theologians then understand synodality?" This echoes the concerns raised earlier this year by Villanova's Massimo Faggioli about the crisis in Catholic theology. Academic theologians are too busy chasing after every intellectual fad from nonbinary sexual identity to decolonization to bother with the documents of Vatican II. Many, perhaps most, academic theologians have a very limited grasp of church history. They may select a proof text from one of the documents of Vatican II — "People of God," for example — and then turn it into something it is not, usually by understanding the concept in sociological rather than theological terms.

How will theologians come to the aid of the church in the U.S. as it seeks to respond to Pope Francis' call? There was a glimmer of hope in this year's meeting of the Academy of Catholic Hispanic Theologians in the U.S., where Ospino called on theologians to re-engage in ecclesial thinking. More needs to be done.

At least we all know what a photographic negative of synodality (and collegiality for that matter) looks like: June's Zoom meeting of the U.S. bishops' conference was the antithesis of synodality. No one listened to anyone. On account of the meeting being virtual, the kind of conversations that are the oxygen of synodality were impossible. When three archbishops — Joseph Naumann, Paul Coakley and Joseph Kurtz — questioned the motives of Archbishop Mitchell Rozanski, who had only asked that sufficient time be set aside for every bishop to speak who wished to do so, the conference had hit a new low.

Indeed, the polarization within the conference is rooted in the politics of the era, and only once the bishops return to a primarily ecclesial focus will they begin to climb out of the hole they have dug for themselves. Instead of arguing about whether or not they should begin denying Communion to President Biden, the bishops should have spent their time discussing Pope Francis' call for synodality and what it means for them as individuals leading local churches and for the body as a conference.

I have a modest proposal. The bishops should invite Luciani to give a presentation at their November meeting. Certainly, the nuncio, Archbishop Christophe Pierre, needs to help the U.S. episcopate wrap their heads and hearts around this idea, so deep in the church's traditions and so promising for the church's future. Will it solve all problems? Of course not. But at this moment in history, synodality is the only way forward, as Pope Francis has correctly discerned. If the U.S. bishops are going to even begin to embrace it, they have a lot of work to do.

A version of this story appeared in the Sept 17-30, 2021 print issue under the headline: US church has a lot of work to do.