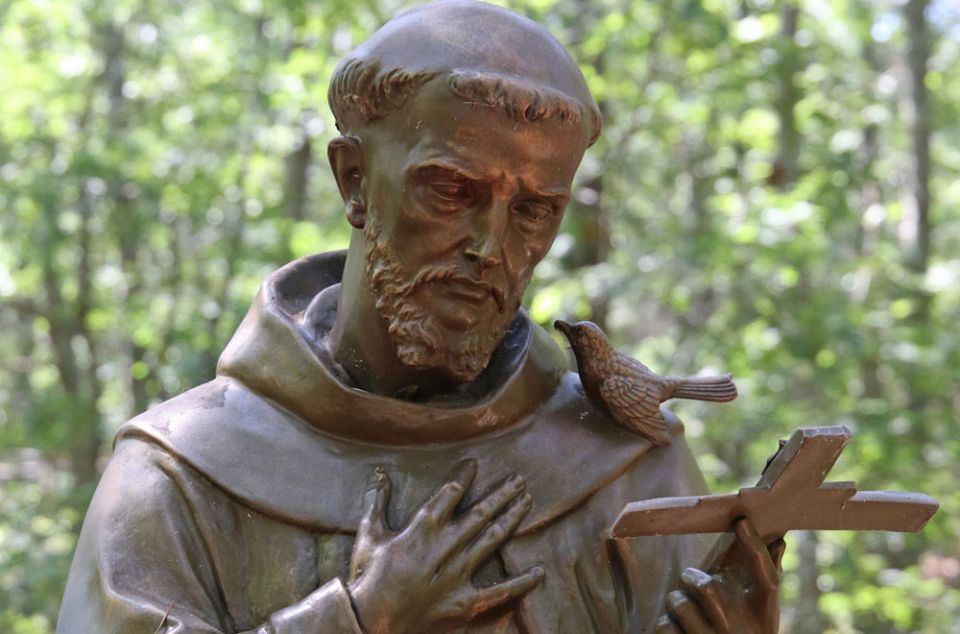 A statue of St. Francis of Assisi, patron of animals and the environment, is seen at Our Lady of the Island Shrine in Manorville, New York. The saint's feast is celebrated Oct. 4. (CNS/Gregory A. Shemitz)

Happy Feast Day to all my Franciscan friends and, really, to everyone, seeing as Francis is the world's favorite saint. Not sure Ambrose is going to make it to the blessing of the animals: Getting him in and out of the car is difficult due to his arthritis, even with the ramp I got from a friend. But, we are going to try. Animals bless us every day with their love, it is only fitting we return the favor once a year.

At The Atlantic, Ben Wittes, the editor of Lawfare and a senior fellow at the Brookings Institution, explains why he would not vote to confirm Judge Brett Kavanaugh, precisely because the judge revealed qualities in his character that had been hidden previously. Wittes also explains why the benefit of the doubt should be given to Christine Blasey Ford, and not because of some a priori commitment to always believing the putative victim but based on the testimony itself. Wittes is one of D.C.'s most honest men. I wish someone would put him on the high court.

According to a new Pew poll, Pope Francis' popularity has dropped significantly on account of the clergy sex abuse crisis returning to center stage. Interestingly, among Catholics, the drop is only half as much as among non-Catholics. I do not myself put much credence in polls about religious matters, and I am reasonably confident the pope does not either. In the Scripture, the mob shouts "Hosanna!" one day and "Crucify him!" by week's end. There is a lesson in that.

At First Things, the editors are publishing anonymous columns related to the synod that opened yesterday. The first is a collage of conservative U.S. talking points, myopic in the extreme, and anonymous. I am not sure why this is unsigned, just as I am not sure the theologian Archbishop Chaput published declined to put his or her name on that First Things article. I understand there are times in life, and in journalism, when anonymity is needed: Writers living under totalitarian regimes, whistleblowers in powerful organizations, etc. But, this?

Politics is, for understandable reasons, a place where hypocrisy is common. But, as this article in Politico explains, House Republican candidates are really leading double lives this year. In the case of libertarian Rep. Dave Brat, the hypocrisy cuts differently than the way it does in deep red districts: Behind closed doors, he is all-in for Trump but his public ads aim to avoid divisiveness. In many other districts, it is behind closed doors that the GOP members of Congress mock the Trumpian base. Hard to determine which group is the more obnoxious and dangerous.

Is Donald Trump secretly promoting same-sex marriage? How else to explain his administration's decision to deny visas to the same-sex, non-married partners of diplomats and U.N. officials? Foreign Policy has the story.

I do not mean to pick on Jesuit Fr. Matt Malone, the editor of America magazine, but he seems to be at his worst intellectually when he finds himself in the midst of controversy. Last week, the journal withdrew its earlier, some would say hasty, endorsement of the nomination of Jesuit-trained Brett Kavanaugh to the U.S. Supreme Court. Clearly, Malone fielded some angry phone calls because on Tuesday he issued an explanation. Towards the end he writes:

It is what follows that last phrase, "insofar as," that is most notably missing right now from the public discourse.

You see the problem, yes? Is not the issue of sexual violence against women one of the "great political issues of our time"? Is not the fact that law schools have become breeding grounds for political hacks in robes one of the "great constitutional issues of our time"? Would civility in public discourse stop either of these problems? I do not doubt Malone's good intentions, but surely he can find a less intellectually compromised way to defend the decisions he and his editors make.