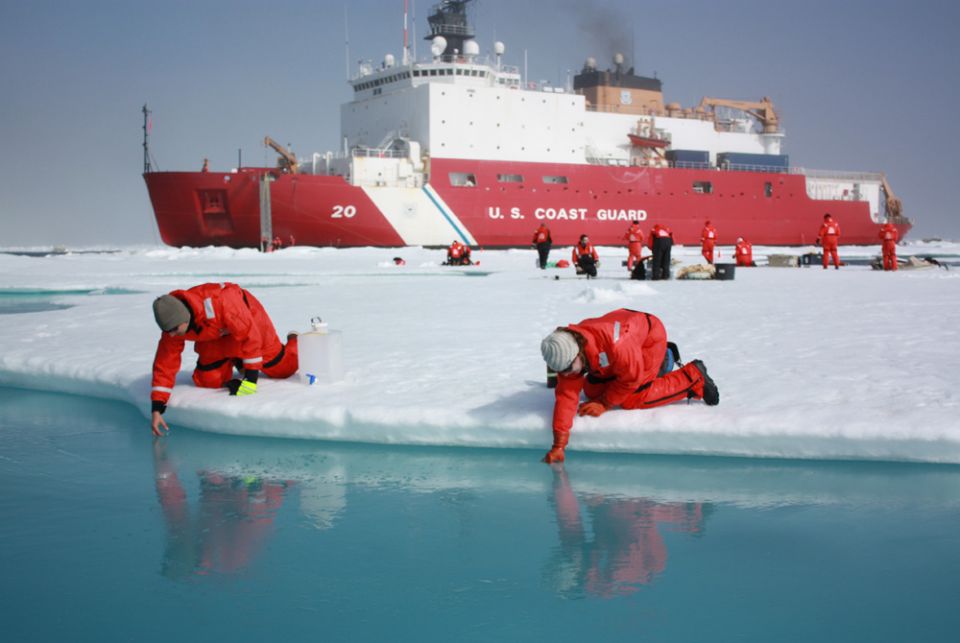 Jens Ehn of Scripps Institution of Oceanography (left), and Christie Wood of Clark University (right), scoop water from melt ponds on sea ice July 10, 2011, in the Chukchi Sea. The water was later analyzed from the Healy's onboard science lab. (Flickr/NASA/Kathryn Hansen)

Ezra Klein, in The New York Times, explains why polarization is more of a problem for Democrats than for Republicans, and will be as long as our constitutional system retains anti-democratic (small "d") elements like a Senate that is not based on proportional representation, the Electoral College, and lifetime tenure on the Supreme Court.

In The Washington Post, Megan McArdle asks the question she says defines the candidacy of Sen. Elizabeth Warren: Just how much billionaires and the corporations they lead are responsible for what ails America? McArdle, rightly, says it is not just the uber-plutocrats, but those deemed "dream hoarders" by the Brookings Institution's Richard Reeves: "the well-educated upper-middle-class people who are desperate to pass their privilege onto their kids, and are unhappy about the steadily mounting cost of doing so." There is much truth in this, but I would wait until we have socked it to Amazon and Jeff Bezos before we see how much we will need the upper middle-class to pitch in.

At the Sacred Heart University blog "Go, Rebuild my House," Brian Stiltner looks at Eitan Hersh's new book Politics is for Power. I called attention to Hersh's argument against "political hobbyism" last week. Stiltner links the decline in civility in our political life to the decline of the church as an institution. I resist his utilitarian arguments for the value of religion to society however: It may be true, but no one should worship the Lord because such worship is good for society.

From ArsTechnica, John Timmer looks at the migration patterns likely to result from rising sea levels. Put differently, if America loses much of its current coastline to rising sea levels, how will the rest of the country be affected? The short answer: A lot. Flyover country may be the marshes and estuaries on the coastlines!

At Salon, Bob Hennelly looks at the convergence of climate change and third world debt. The story is grim: Just as there are tipping points in climate change, after which most remedies are too little and too late, the increasing financialization of the economy holds similar dangers. Eric LeCompte, executive director of JubileeUSA points to the situation in Ecuador, where the country is selling off a third of its rainforest to pay its debt to China.

At Working-Class Perspectives' blog, from Georgetown University's Kalmanovitz Initiative for Labor and the Working Poor, Marc Dann and Leo Jennings III make the almost self-evident case that Democratic candidates could improve their standing in Midwestern industrial states by proposing ways to fully fund pension funds that are currently underfunded. I say "almost" because the issue was proposed to Hillary Clinton's 2016 campaign and they did nothing with it. This year, the Democrats seem more interested in transgender everything than in helping the hundreds of thousands of people whose pensions are underfunded. The issue also brings a nice populist angle: The government bailed out the banks, why not the workers?

Speaking of transgender issues, in New Hampshire, a bill has been introduced to ban boys who declare themselves transgender from participating in girls' sports. The issue came up in Connecticut last year when two transgender athletes won the state championships in track and field. The issue is complex and involves hormone therapies that affect the human body, but the fact that a student simply states they now identify with a different gender should not be enough to undercut the achievements of Title IX, the federal law that revolutionized sports for girls and women in this country. Of course, anyone who is transgender deserves sympathy but they do not get to settle these complicated issues: All of us do.

I am not usually a big fan of Trevor Noah's "The Daily Show" but this clip of him discussing the Saudi Arabia hack of Jeff Bezos is brilliant. Watch to the end to see his send-up of Pete Buttigieg, who recently had a "please clap" moment a la Jeb Bush.

Sunrise activist asks people of faith: 'Will you stand with us to fight for a livable future?'

A second Trump term would be 'game over' for the climate, says top scientist