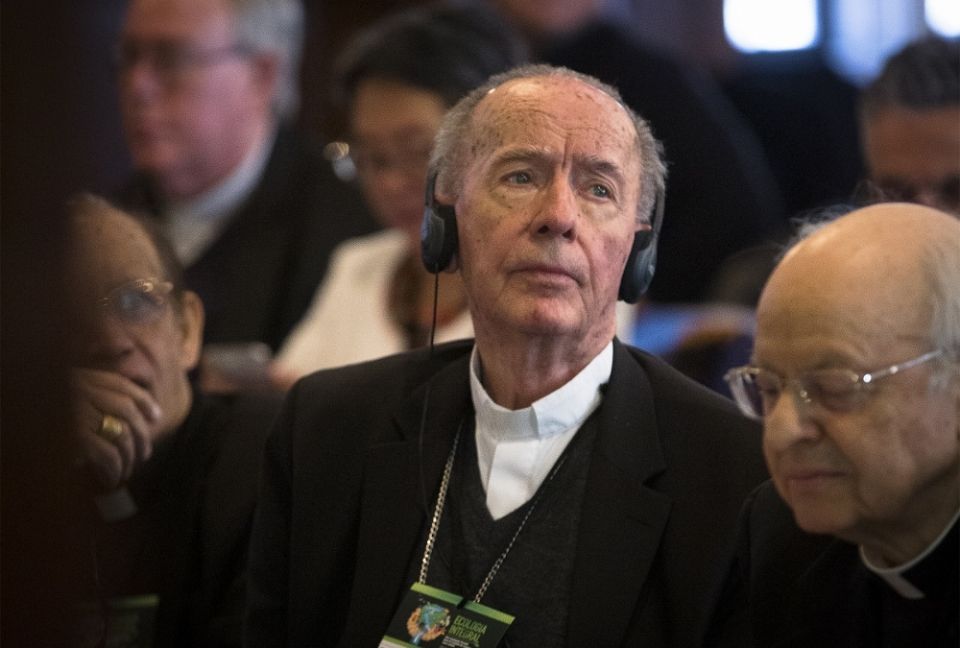 Brazilian Cardinal Claudio Hummes, relator general for the upcoming Synod of Bishops on the Amazon, listens to a presentation in French during the Integral Ecology summit at Georgetown University in Washington March 19. (CNS/Tyler Orsburn)

The number of stupid articles published about abortion have been too numerous to count. One of the smarter ones came from Kathleen Parker at The Washington Post, who linked the abortion extremism in Alabama to that in New York and Virginia. I am not sure the latter "paved the way" for the former, but I have noted many times that there is a symbiotic relationship between the pro-life and pro-choice movements and it costs the country dear.

One of the dumber articles, also at the Post, was by Carliss Chatman, a law professor who tried to demonstrate the unacceptable logical consequences of the pro-life stance, but only succeeded in demonstrating the limits of logic. This is especially odd because the difficult existential circumstances of a woman facing a crisis pregnancy have always been one of the pro-choice side's strongest arguments, and it is based on empathy, not logic.

On a happier note, the Catholic Labor Network highlights some of the recent work by Catholic and labor leaders in Las Vegas. Hotel employees, many of the immigrants, are easily exploited by large hotels, including the Trump Hotel. It is good to see the Catholic Church standing with these workers as they seek to become "agents of their own development" in Pope Francis' happy phrase.

At Civiltà Cattolica, an interview with Cardinal Claudio Hummes, who has been appointed relator general for the upcoming synod on the Amazon. Hummes, you will recall, is the cardinal who leaned to the newly elected Pope Francis in the Sistine Chapel and said, "Don't forget the poor." He hasn't.

Tim Busch, the mega-donor for conservative Catholic causes and founder of the Napa Institute, took to the pages of The Washington Post to write an article explaining how incoming Archbishop Wilton Gregory can restore trust in the Catholic Church in the nation's capital. The new archbishop is well-advised to stay clear of Busch and his fervent opposition to Francis. I should also say that I got a note from someone at the Catholic University of America explaining that the university's board is not holding its meeting in conjunction with the summer meeting of the Napa Institute, as I noted last week, only the Board of Visitors at the Busch School of Business. No branch of the university should associate itself with the Napa Institute, which is featuring a who's who of anti-Francis prelates at the meeting. The bishops have to decide if Catholic University will be like EWTN: If they do not get ahold of the problems early on, it will only get uglier when they have to lance the boil.

Mayor Pete Buttigieg is undoubtedly very smart, but I am not sure he understands the meaning of the word anachronistic. His call for removing Thomas Jefferson's name from events because Jefferson was a slave owner is a perfect example of goofiness on the left, and the kind of goofiness that causes middle America to conclude the Democrats' values are not their own. This is how Democrats lose elections.

Over the years I have registered objections to things said by Fr. Jonathan Morris during his many appearances on Fox News. Still, I was saddened to learn that he is leaving the priesthood. Maybe he did not drink deeply enough at Bishop Robert Barron's font of wisdom about the "heroic priesthood." Not to go all Martel on anyone, but these clerics who lean hard into the need for ecclesial solidity don't always seem able to finish the race.

Pope Francis and workers in Genoa