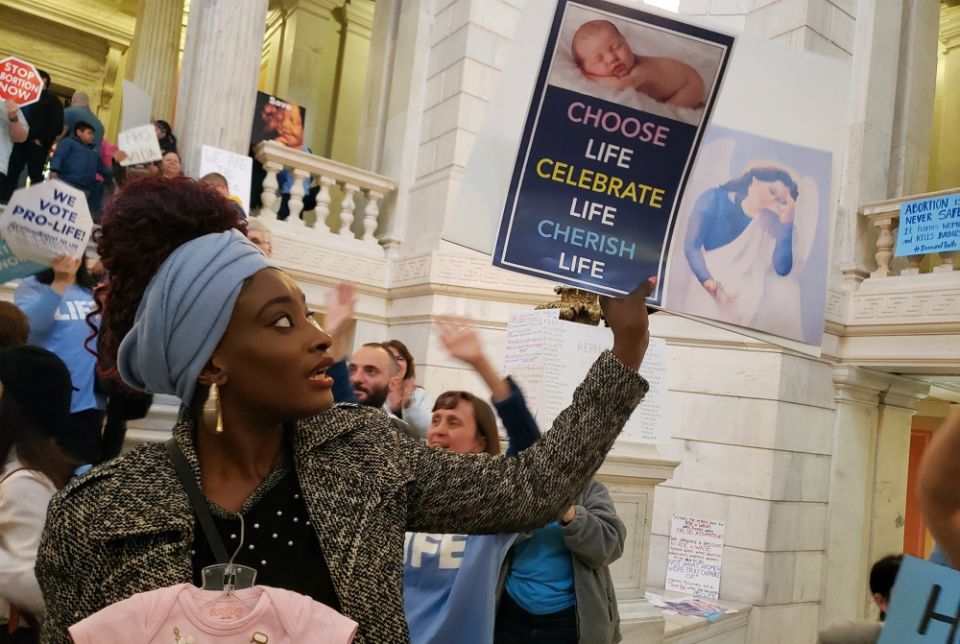 Elizabeth Koroma of Providence, Rhode Island, holds a pro-life sign in the rotunda of the Rhode Island Statehouse May 14 to protest a Senate bill aimed at expanding legal abortion in Rhode Island. The judiciary committee voted 5-4 against the measure. (CNS/Rhode Island Catholic/Brian Fraga)

In The New York Times — finally!!! — an article that captures the ambivalence many people feel about abortion, especially in the black community. The Democrats are being pushed by NARAL and its allies into a making abortion orthodoxy a litmus test, but the candidates should remember that the black community has strong, historical reasons for being suspicious of abortion, and is necessarily sensitive to the classification of some persons, even very little ones, as being someone else's property. Black people are also overwhelmingly faithful Christians who share the faith's ancient and enduring moral disdain for abortion. Candidates take note.

In The Washington Post, Rick Atkinson looks at the American Revolution from the British point of view and wonders if there are not parallels to the American situation today: What is the price of empire? Does the hubris that attends empire inevitably lead to its downfall? When is a falling domino just a domino? All good questions, none of which have easy answers.

Relatedly, at Foreign Affairs, Jessica Chen Weiss on the rise of China and what it means for global politics, under the ominous title "A World Safe for Autocracy?" Again, not a lot of easy answers, but the rise of China's political might, to match her economic power, is likely inevitable and more than a little frightening. The next time you hear a champion of market economics boast about raising millions out of poverty, remember that most of the rise has occurred in China, with no concomitant rise in political freedoms for the people in that great country.

More grim news from Puerto Rico. At The New York Times, a report on the island's power authority buying lousy oil that caused toxic pollution, but covering it all up by claiming they had purchased higher-quality oil. The higher cost was passed on to customers along with the pollution. If the Democrats can manage to win in 2020, Puerto Rico should become the laboratory for an entirely sustainable energy grid, but it will have to first reckon with this historically corrupt organization on the island.

At La Croix International, Robert Mickens on Pope Francis' radical theological vision, as expressed in a recent talk in Naples. More on this tomorrow.

Because the news is often too grim, here is a lighthearted story from the BBC: A vet named Alfonso sings opera to his charges. I wish this vet were near me and so does Ambrose. We are both partial to Verdi.