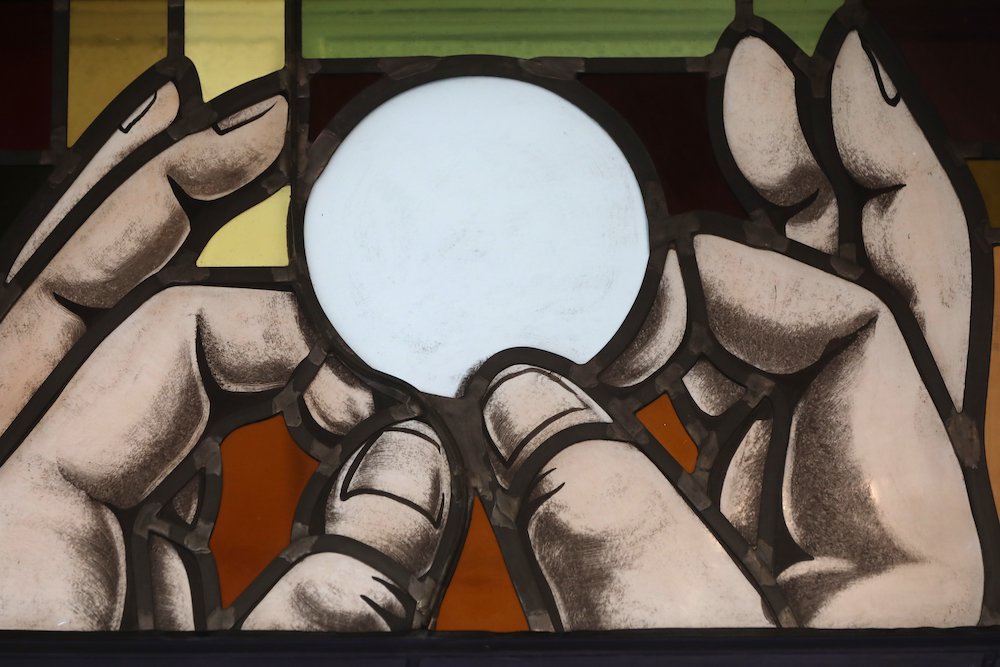 Elevation of the Eucharist is depicted in a stained-glass window at St. Anthony's Church July 15 in North Beach, Maryland. (CNS/Bob Roller)

In Commonweal, Cardinal Blase Cupich of Chicago suggests the U.S. bishops consider dropping the plan to issue a document on the Eucharist and, instead, embark upon a eucharistic revival. Discussing the obligation to worship, Cupich has a splendid citation of Yiddish writer Isaac Bashevis Singer: "He said, in effect, that if we don't worship God, we will worship something else, and perhaps, tragically, we will worship ourselves." More on this anon.

Here is some good news. Newsweek reports on a pro-Trump rally in Kentucky that was expecting 10,000 people but fewer than 300 showed up. To be sure, Trump was not in attendance himself and if he had been, I am sure he would have drawn a crowd. But what the poor showing indicates, comforting in one way and horrifying in another, is that the Trump cult is not transferable, that his fans love him but that love does not extend to his acolytes.

At Politico, Tom Perriello argues that the U.S. bishops should stop criticizing President Joe Biden over his stance on abortion and instead recognize the many ways he is the most pro-family president in history. I think the bishops can do both, actually, but Perriello's article points to the fact that the conservatives do not have a monopoly on "pro-family" politics. And, it is good to see Perriello in print. Longtime readers will recall my profile of him when he was a congressman from Virginia back in 2009.

A second Politico article is very important. Georgetown law professor Sheryll Cashin looks at the many ways, historic and ongoing, that racial divides in housing policy have created increased inequality along racial lines. This wealth gap is the heart of structural racism. The money quote:

The segregation of affluence facilitates opportunity hoarding, whereby wealthy neighborhoods enjoy the best public services, environmental quality and private, public and natural amenities, while other communities are left with fewer, poorer-quality resources. Worse, suburban-favored quarters are subsidized by the people they exclude: Through income and other taxes, people of all racial and class backgrounds who live elsewhere help pay for the roads, sewers and other infrastructure that make these low-poverty, resource-rich places possible.

I will venture the opinion that there are few people more morally compromised than white liberals who, having once gentrified an urban, Black or Latino neighborhood, then complain when mixed-income housing is built. Cashin looks at the ways analysis of neighborhoods along lines of poverty and race also afford us the tools to identify which neighborhoods need investment and how we can begin to help those who have been harmed by housing segregation become agents of their own advancement.

A third Politico story falls in the category "How the left could help Trump win in 2024." Some Democrats are upset with President Biden and congressional leaders because they articulate their opposition to the Texas abortion law by claiming to defend "women's right to choose." The problem? "Women" is too "gender specific." The activists, some of whom work in the White House, prefer the term "birthing person." Who talks like that?

Everything about the California recall election is pretty obnoxious, including the bizarre constitutional provision that allows these recalls in the first place. This year's, however, has demonstrated something that is more exportable to other states and more threatening to democracy: planting the idea in advance that the election was stolen. Hard to imagine anything that will undermine democracy more. The New York Times has the story.

At Input, a look at Jeff Bezos' investments in a startup that is trying to combat aging. "The fascination with anti-aging is an interesting one, perhaps because death is one of the few things that money hasn't been able to overcome — at least, not yet," writes Tom Maxwell. "For people like Bezos who can reshape entire industries in their image and go to the cosmos, there's probably a certain feeling that their money should be able to combat aging as well." I look forward to eternal life (provided God's mercy is very great) but that could not be more different from the desire to live forever in this life. I wonder if Bezos would even grasp the difference?