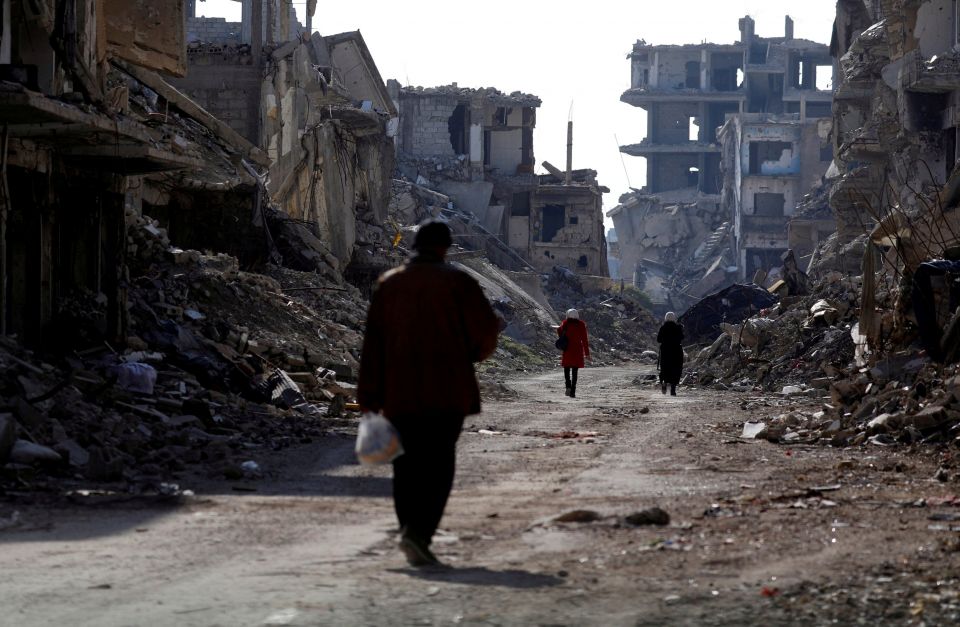 People walk past damaged buildings at the Yarmouk Palestinian refugee camp on the outskirts of Damascus, Syria Dec. 2, 2020.(CNS/Reuters/Omar Sanadiki)

Not being shy about criticizing the bishops' conference, it gives me great pleasure to praise them, indeed, to offer high praise. The chair of the Committee on International Justice and Peace, Bishop David Malloy, signed on to a letter to President Biden with JubileeUSA that calls for some major financial changes to help the poorest nations, most especially by releasing $3 trillion in global reserve funds. The letter also calls for working with international partners to help end tax avoidance schemes that permit the wealthy to skip out on their commitment to the common good. These proposals are not going to win — or lose — anyone an election; they are far from the news cycle. But they have the potential to lift up millions of poor people at a time when the World Bank is predicting 150 million people will fall into extreme poverty this year.

Three pro-life groups have decided to launch an initiative that focuses on … you guessed it, voting integrity. That is the polite way conservatives now talk about efforts at voter suppression. Leading the initiative will be Ken Cuccinelli, former acting deputy director of Homeland Security who oversaw efforts to clamp down on immigration. No one can, with a straight face, claim that the mainstream pro-life movement is not a mere arm of the Republican Party, a fact that harms the cause over the long term. RealClearPolitics has the story.

At Politico, a look at some political races to become secretaries of state in 2022. The post-election drama put new focus on these positions, most especially in a state like Georgia where Republican Brad Raffensperger stood up to former President Donald Trump's efforts to undermine the election result. I understand that Democrats want to win that election, but if Raffensperger loses the GOP nomination to a Trump-backed challenger, the Democrats in the Peach State should consider nominating Raffensperger themselves.

From Working-Class Perspectives, Ken Estey looks at the Texas power grid crisis, how it was foreseen but neglected by the authorities and how a blind ideological commitment to market solutions made this kind of crisis virtually inevitable. The working class was left in the lurch, and they will receive more than their fair share of the bill for the mess.

At DailyKos, a granular look at popular vote totals in Senate races nationwide. Democratic candidates have won the majority of votes cast in every election since the 1990s, but the GOP has maintained control of the upper chamber half of the time because of the over-representation of states with small populations. We aren't going to be able to change the Constitution anytime soon, so Democrats better learn how to talk with rural America.

Millennial has done a great job articulating Catholic just war principles regarding the atrocities committed by the Syrian regime, and keeping the issue before our eyes. This week, they called attention to a "60 Minutes" "Overtime" segment I had not seen about efforts to document the crimes against humanity perpetrated by Bashar al-Assad and his thugs. This is not for the faint of heart, but it is reality and we turn our eyes away from it at our peril.