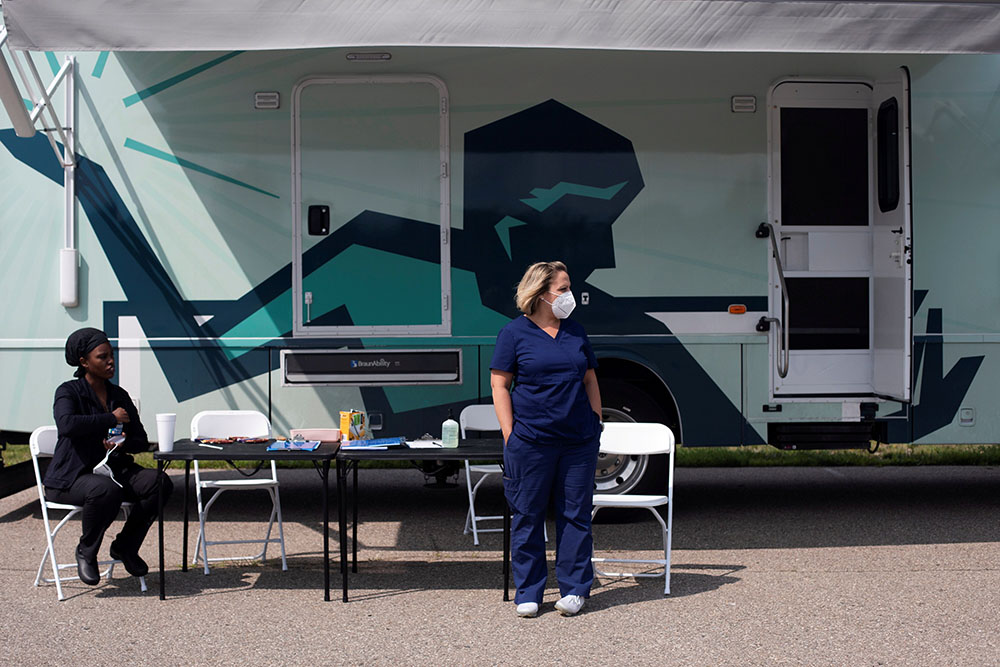 Nurses in Detroit wait for people to come by to receive their COVID-19 vaccine at a mobile pop-up vaccination clinic hosted by the Detroit Health Department with the Detroit Public Schools Community District July 21. (CNS/Reuters/Emily Elconin)

Politico looks at the growing alarm among moderate voters who put Joe Biden in the White House about school curriculum on race. It is clear that conservatives have successfully won the first round, framing the issue in such a way as to appeal to precisely these critical voters. It is also clear that too many Democrats are in simple denial about the fact that they have a problem and need to find a way to reframe these issues and reframe them fast. Democrats and liberals need to remember: All politics is local, so if you are losing at the school board, you are toast at the state and federal level.

At The Wrap, the Chinese government complained that NBC featured a map of China in a graphic during the Opening Ceremonies that was "incomplete." That is, the map did not include Taiwan and the South China Sea. Of course, also marching in the Opening Ceremonies was the team from "Chinese Taipei," that is, Taiwan. This is how totalitarian regimes operate: They notice everything, take umbrage at everything, they refuse to accept any reality that does not cohere with their ideology.

Speaking of the evil effects of totalitarianism, according to this report at The New York Times, Facebook is now partnering with religious groups to explore ways the social media giant can help pastors improve their reach. Color me suspicious. I believe there is a place for new tools and new ideas in trying to evangelize and catechize, but introducing an organization whose business model is profit-based alarms me. We are shaped by our tools. Talk to almost any bishop in the country and they will recall being told by one of their large donors that they need to do things different because "you couldn't run a business like that!" The bishop has to remind them that the church is not a business.

At The Washington Post, Frances Stead Sellers and Isaac Stanley-Becker look at proposed bills making their way through GOP-controlled state legislatures that limit the power of public health officials to mandate COVID-19-related restrictions. Bad enough that Republicans are trying to restrict voting. Now they want to restrict public health measures. At a time when the virus is spreading like wildfire.

Relatedly, and also at WaPo, columnist E.J. Dionne points out that Republican officials were only too happy to spread skepticism about the anti-COVID-19 vaccines a few months ago. Now that the virus is spreading among the unvaccinated, those officials need to undo the damage they already caused. And there is no guarantee that trying to convince people to set their skepticism aside will work.

Heather Cox Richardson's roundup of the news, part of her "Letters from an American" series, is always worth a read. This Sunday's details several examples of right-wing extremism that should worry anyone who cares about the country and its future.