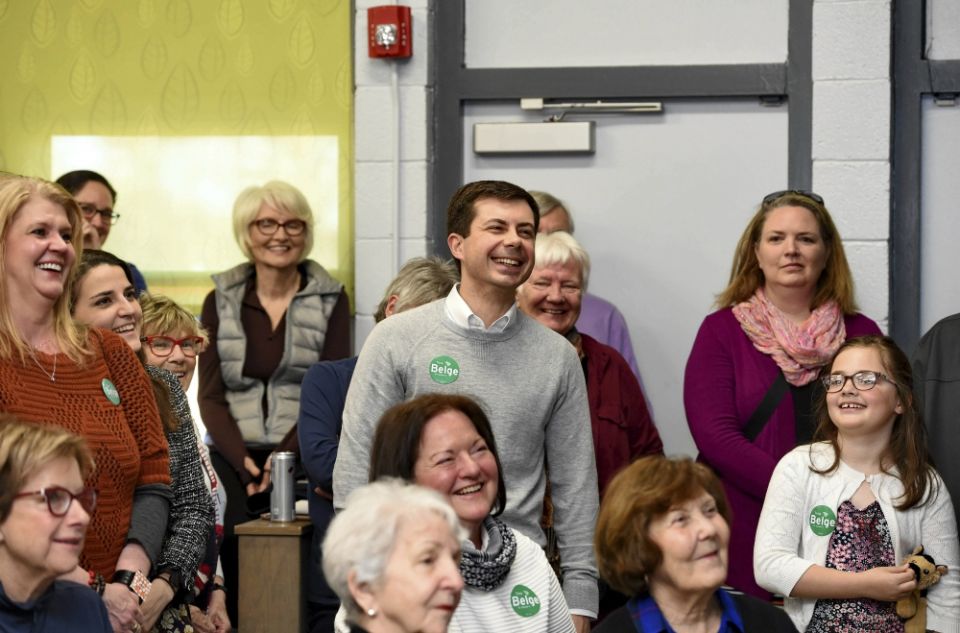 Mayor Pete Buttigieg of South Bend, Indiana, laughs before he speaks to a crowd about his presidential run during the Democratic monthly breakfast at the Circle of Friends Community Center March 23 in Greenville, South Carolina. (AP/Richard Shiro)

Pete Buttigieg is now leading in polls in Iowa, which holds its first-in-the-nation caucus Feb. 3, 2020. Iowa launched the candidacy of Barack Obama, and the mayor of South Bend, Indiana, likes to tell voters in his stump speech that he first came to the Hawkeye state to campaign for a "young candidate with a funny name."

It is interesting that the age demographic Buttigieg does best with is those over 65. I think they wish they had a kid who was so thoughtful and well-spoken, always looking prim in his clean white, pressed shirt, never in trouble. Molly Roberts at The Washington Post had some intelligent comments on this phenomenon.

I confess I do not see the attraction and I am old enough to be Mayor Pete's, ahem, older brother. Indeed, it is worse. I think Buttigieg's campaign is all fluff and fraud.

If you go to his campaign website, you are greeted by a picture of him facing away, waving to what appears to be a large audience. I like the shoes. I don't like the quote from Mayor Pete that accompanies the photo: "I am running to be the president who will stand amid the rubble, pick up the pieces of our divided nation, and lead us to real action to do right by Americans who have waited far too long." Talk about poll-tested language. I am suspicious of contentless nouns like "real action" and contentless verbs like "do right."

What is more, you have the sensation that the accompanying picture should show him leaping a tall building in a single bound. Maybe emerging from the empty tomb. Grandiose is not a word I normally associate with American politics, but Buttigieg is often grandiose.

Buttigieg is also malleable in ways that are disturbing. In 2010, he was running for state treasurer in Indiana and he attended a tea party meeting. His message was not that different from what it is today, but he clearly was trimming it in ways that would make him more sympathetic to his audience. The Democratic Party does not need a trimmer, still less someone who did not see the tea party for what it was, and see that early on, as the proto-Trump movement of nationalism and racism.

During last week's debate, Mayor Pete was challenged on his relative lack of experience. He defended his experience and his reply was masterful: "I get it's not traditional establishment Washington experience, but I would argue we need something very different right now. In order to defeat this president, we need somebody who can go toe-to-toe who actually comes from the kinds of communities that he's been appealing to."

Masterful and fraudulent. This is a college professor's kid, who went to Harvard University and then got a Rhodes scholarship. If that doesn't qualify you as "establishment," what does?

As for coming from "the kinds of communities that [Trump's] been appealing to," St. Joseph County, where South Bend is located, is one of the few counties in Indiana that went for Hillary Clinton in 2016. The mayor also touts his success at improving the quality of life in his midsized Midwestern city, and promises he could do the same elsewhere, but I wonder how much having a major research university at hand gave South Bend a leg up that many other cities would not have.

I am not someone who sees patriarchy as the bugbear of all that ails Western civilization. But, in 2008, while I rejoiced in the fact that America had elected its first black president, it struck me as evidence of at least some degree of residual sexism. While blacks only constitute about 13% of the population, we had our first black president before our first woman president.

Gallup estimates that only 4.5% of the population is LGBT. The fact that Buttigieg is gay should be a matter of indifference, but you have to ask yourself: If he were heterosexual, do you think he would be leading the polls in Iowa? That he would have had his campaign bankrolled by the entertainment industry and well-heeled LGBT activists?

The fact that he is gay has given the mayor a veneer of progressivism. It is only a veneer. When will an interviewer ask him to explain what led him to work at the McKinsey & Company consulting firm, which is as deep into the establishment as one might go? What lessons did he draw from his time there? His verbiage strikes me as precisely the kind of consultant-driven pablum that consultants produce. But, more importantly, what about the economy and society did he learn while there? Inquiring minds want to know.

And if time working at McKinsey doesn't also make you a member of the establishment, pray tell, what does? Oh yes, a Rhodes scholarship.

The weirdest part of his candidacy, however, is that while he trumpets his youth, and traffics in the Kennedyesque idea that it is time for a new generation of Americans to take up the torch of leadership, his ideas are very old-fashioned. On his campaign website, the first item on his list for combatting poverty is expanding the earned income tax credit. The EITC has definitely been a great boon in the fight against poverty, but it was first enacted in 1975. His section on climate change lacks anything particularly innovative. And he suggests that because he served in the military, that counts as a foreign policy credential. My uncle Frank fought in the Battle of the Bulge but I would not have wanted him to be secretary of state.

I am sure Mayor Pete thinks he really could do the job: People who run for president tend to think highly of their abilities. Vice President Joe Biden, however, brings more than self-confidence to the race. He brings a wealth of experience. Sen. Bernie Sanders and Sen. Elizabeth Warren bring ideas about how to make America a more just society. Mayor Pete brings his youth and his old, tired ideas, and the conviction that he is a man of destiny.