The most divisive president in US history champions unity in State of the Union address. What? 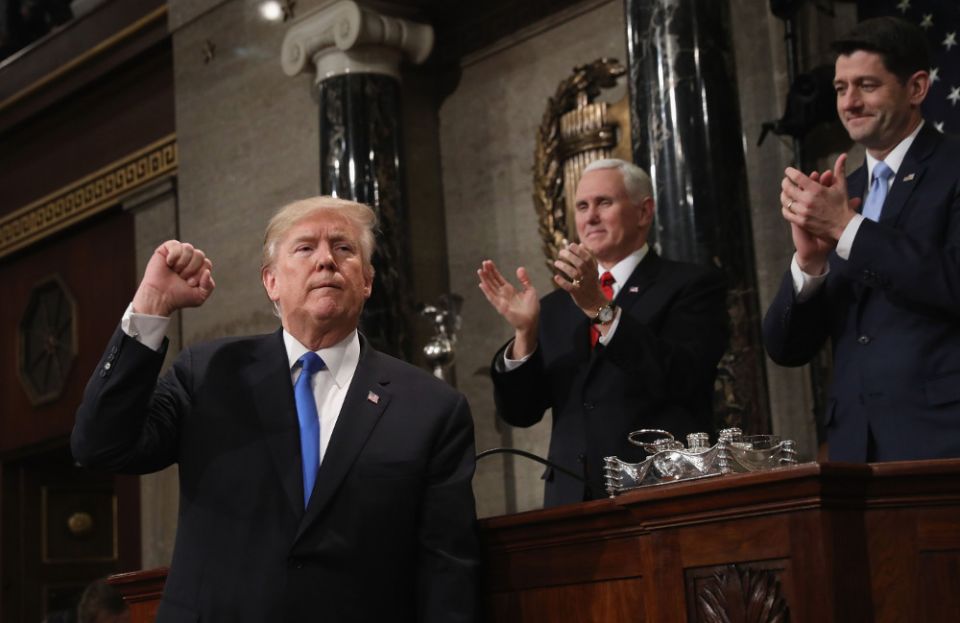 U.S. President Donald Trump delivers the State of the Union address in the chamber of the U.S. House of Representatives Jan. 30 in Washington, D.C. Behind Trump is Vice President Mike Pence, left, and Speaker of the House Paul Ryan. (Newscom/CNP/AdMedia/Win McNamee)

President Donald Trump, after a year of divisive tweets and regressive policies and public demeaning of political opponents, called the nation to unite behind his leadership in last night's State of the Union address.

President Trump, who spoke darkly about "this American carnage" one year ago in his inaugural address, was hopefulness and in good cheer last night, at least for the first three quarters of his speech.

President Trump, who ran as a populist, and then worked in cahoots with congressional Republicans to bestow a $1.5 trillion bonus to the richest Americans and the corporations they lead, stood at the podium and claimed credit for an economy that is little different from the one he inherited from President Barack Obama and further suggested that it was the little guy who was benefiting the most from his policies.

Down the rabbit hole

The president nearly broke his elbow patting himself on the back for slipping into the tax reform bill a repeal of the Affordable Care Act's individual mandate: "The individual mandate is now gone." His fellow Republicans, all of whom enjoy comprehensive government health insurance at no cost, nearly broke their hands they were clapping so hard.

The president spoke about "our great American flag" and asked a young man, Preston Sharp, who was seated with the first lady, to stand and receive the applause of the nation. Sharp started an effort to place Americans flags at the graves of veterans, a lovely thing. The president said the effort reminded us all of "our civic duty." Civic duty? Like honoring the right to free speech and to protest, as football players did last year, only to have this same president urge that they be fired. Young Master Sharp looks like a fine boy, and it was disgusting to see him made a prop in an exercise in McCarthyite values.

About two-thirds of the way through the speech, Trump raised the issue of immigration. Throughout his campaign, from the day he announced his candidacy until his last rally, no issue was more central to Trump's campaign. He restored a virulent strain of nativism to the mainstream of American politics, and last night he stoked those ugly fires again. Immediately after he mentioned the word "immigration," he spoke of "gangs" and "drugs" and "low-wage" competition for jobs. Trump spoke about "protecting" the American people from the ill effects of immigration and did not seek to balance any of it with praise of the contributions immigrants make. He presented a family whose daughters had been killed by members of the MS-13 gang and exploited the tragedy. I half expected him to begin discussing the hardship faced by the Sudeten ​Germans!

The policy he outlined was only slightly less severe than his language. He is offering a pathway to citizenship for some 1.8 million undocumented immigrants, a proposal that has the yet more xenophobic among his base seeing red. And he asked for increased border security, which is fine. But his insistence on a "merit-based immigration policy" begs the question of whether the only merit that matters any longer is economic, even if the line got the mostly white Republican over-achievers on their feet. He vowed to end what he calls "chain migration" in order to "protect the nuclear family." Welcome to America, but grandma is on her own. This from the "pro-family" party.

"An attack on chain migration' is really an attack on keeping families together. Chain migration is not the problem," Dylan Corbett, founding director of the Hope Border Institute, told NCR. "Here on the border people know that if they applied today to bring their brother or sister from Mexico, it could literally take about 150 years to get a green card. The problem is a broken system with no line to step into. The problem is a wall that drives vulnerable migrants to their death in the desert. The problem is whipping up xenophobia against refugees, unaccompanied child migrants, the undocumented and Dreamers."

"Instead of bringing the nation together, the president chose to pit communities against one another, cheaply playing migrants and the poor against each other," Corbett said after the speech. "The president went really low when he lifted up the obviously still-suffering parents of victims of fatal tragedy for applause in order to paint all migrants with the brush of criminality. When did the consecration of the tragic for political ends become normal?"

Last night's speech highlighted the challenge of this presidency. The State of the Union, prescribed in the Constitution, is one of the normal functions of the office, and the man delivering that speech is determined to upset all vestiges of normalcy, and indeed the norms of democracy that have flowed, intermittently and unevenly to be sure, but flowed nonetheless from that same Constitution. The first lady entered the chamber and everyone applauded. The president's cabinet was announced and ambled down the center aisle, shaking hands with members of Congress. The vice president of the United States, in his role as president of the Senate, and the Speaker of the House, sat on the dais in front of the American flag. Everything was normal, and then the Orange Rogue entered the chamber, and we were invited to suspend memory, to ignore facts.

It is the dilemma of the opposition: Does one applaud the president when he behaves like a normal president and risk normalizing his more frequent, hateful public posture? Does one risk descending to his level when, with obvious warrant, some members of Congress refused to show up for last night's charade? Will the post-Trump polity be more likely to heal or not depending on how the opposition reacts now? Is it foolish to think that far ahead?

"I watched a president who has lost all moral credibility pay lip service to unity and common ground while continuing to stoke fear and division," said John Gehring, Catholic program director at Faith in Public Life, a progressive advocacy organization. "Catholics and other people inspired by their faith will continue to resist this administration's cruel assault on immigrants and the poor. Moral movements that transcend partisanship have always challenged morally bankrupt leaders. The same is true today."

Column | The most divisive president in US history champions unity in State of the Union address. What?