New stars of the left need to learn to persuade 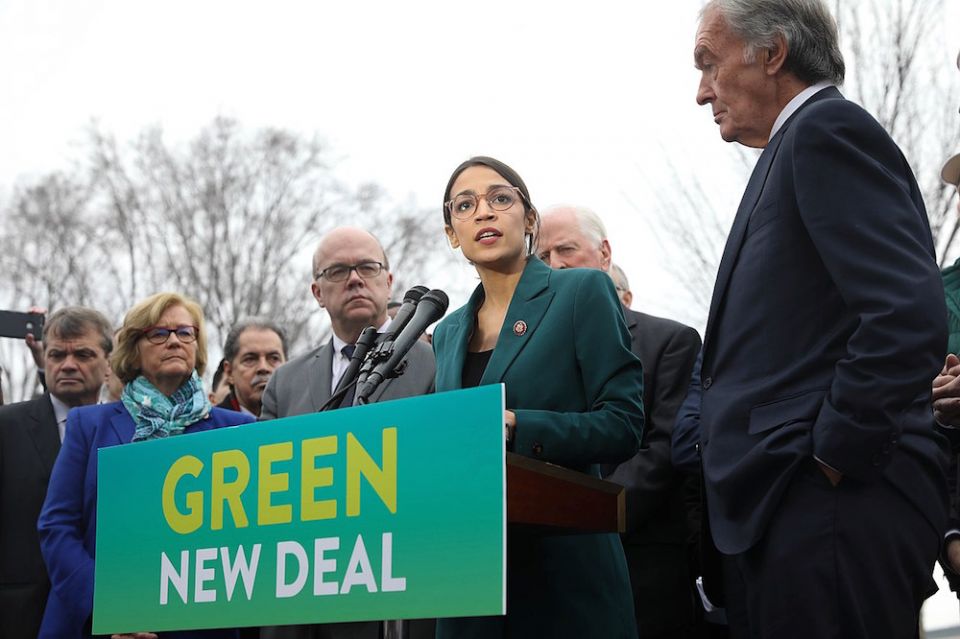 All of the promise, and many of the problems, the feisty freshmen Democratic members of Congress, most especially Rep. Alexandria Ocasio-Cortez, represent are on full display in the Green New Deal and its roll out. It is usually impossible to disentangle the politics from the policy, to be sure, and it is quite clear where Catholics should be lining up. Still, the dynamics in this case warrant attention not only because they are illustrative of our political life at this moment, but also because the issue is so critical.

The Green New Deal Resolution (GNDR) is just that, a congressional resolution, a promise from a group of people who are notorious for not telling the truth or keeping their word. And, for politicians, the comfort-level they must achieve with falsehood starts as candidates, when they promise X and pledge they will accomplish Y, even though they tend not to add, "Of course, as one of 435 members, I will do my best to achieve Y, but there can be no guarantees."

Still the GNDR at least takes climate change seriously, setting forth the dangers the country, and the planet, face and the moral obligation to confront those dangers. And, it is not afraid to think big and think outside the box about how to confront the dangers. Even Ross Douthat, no liberal he, gave the GNDR one cheer on this score before denouncing the GNDR for its purportedly socialistic leanings. Ocasio-Cortez is a master of social media, and so her ability to bring focus to an issue that is not built for Twitter, that is not ephemeral or simple, is a real test.

And we need to pause for a minute here and recognize just how outrageous it is that our country, and only our country, is in active denial about the problem, with a president who doesn't understand the science of climate change and displays his ignorance with some regularity, most recently by calling attention to the snow storm that engulfed Sen. Amy Klobuchar when she announced her candidacy last week, as if extreme cold weather did not fit with models of climate change.

The problem is deeper than Donald Trump. The fossil fuel industry, and most especially the Koch brothers, have funded a campaign to obfuscate the issue, to cast doubts about the science where no doubts exist, to convince people that there really is not a problem. If you did not know anything else about the Koch brothers, knowledge of their role in creating a climate change denial industry should be reason enough to have been appalled at the hero's welcome afforded Charles Koch at the Catholic University of America. The fawning over Koch happened after Pope Francis had published "Laudato Si', on Care for Our Common Home" and after Pope Benedict XVI had earned himself the title "the green pope" for his concern about climate change.

So kudos to Ocasio-Cortez for lending her celebrity to the Green New Deal. Without her focus, would we even be talking about it? I doubt it. But, Ocasio-Cortez lent more than her star power to the cause. She also lent her not-ready-for-prime-time amateurishness to the cause. There is something to be said for keeping your head down and getting to work, letting your staff become acquainted with the issues more deeply, and figuring out the political landscape more certainly, before launching something that was not quite ready for launch.

The greatest strength of the climate change cause rests on the near unanimity within the scientific community. Yet, when the GNDR states, "Whereas the United States is currently experiencing several related crises …" and goes on to list issues like wage stagnation and increasing income inequality, you are moving beyond what the science warrants. The only way that climate change is "related" to wage stagnation is that both issues are popular with progressive activists. It would have been better for Ocasio-Cortez and her co-sponsors to make a distinct case for including so many social justice issues in their resolution.

The central thrust of the GNDR is anti-capitalist, but there are other items on the progressive checklist, too. For example, the text calls for "ensuring the use of democratic and participatory processes that are inclusive of and led by frontline and vulnerable communities and workers to plan, implement and administer the Green New Deal mobilization at the local level." This looks like subsidiarity, and I am all for that, but if a process is small-d "democratic," you can't guarantee an outcome such as who will lead the effort. The language is boilerplate cant from a college seminar about intersectionality, and it fulfills the caricature people have of the left. It is foolish, and foolishness does not help the cause.

As Jonathan Chait points out in an essay at New York magazine, the linkage of climate change and capitalism was made by Naomi Klein whose book This Changes Everything: Capitalism vs. The Climate argued you could not save the planet without overturning capitalism. I have no great love for capitalism, but the thesis is not only untenable, it is politically disastrous. On the ground, I have discovered that advocacy on climate change in the religious community quickly lands you working with people whose primary focus is poverty or other social justice issues, so there is an important place for thinking outside the capitalist narrative for solutions. It is also true that our systems for distributing energy, like all systems, reflect the prejudices of the culture. Why not remake those parts of our economy that are unjust if you are remaking it to be green?

Because efforts to care of our natural environment have to attend to our human environment. We need to persuade people. It is the thing that most distinguishes an effective activist from an ineffective one: The effective activist finds creative ways to widen the door to make it easier for people to walk through. The ineffective activist hurls insults at those they need to convince, cops a stance of moral superiority and, having made a scientific case for action, introduces non-scientific solutions without admitting they are non-scientific. That turn from science to values is an essential turn, but it must be acknowledged, and a different way of speaking and convincing must proceed therefrom. It does nothing, absolutely nothing, to help the planet to fail to persuade others to help save the planet.

It is a fine question whether we will be able to convince enough of our fellow citizens to confront climate change with all the rigor it demands before our climate passes some key tipping points. It is shocking that in our church, four years after Laudato Si', very few bishops have done anything to address the issue. The Boston Archdiocese undertook some large solar installations, including one at the chancery, but where are the efforts from the other bishops who claim they support Francis? Bogged down by business-as-usual.

Ocasio-Cortez and her colleagues are absolutely right that the threat posed by climate change requires something larger than business-as-usual. But half-baked ideas and acting in a manner that invites caricature do not help, whether or not your team makes a rookie mistake in releasing internal documents to the media. I hope these young congressional freshmen can keep their pizzazz while they develop more gravitas. Time will tell. But, on an issue this important, all the social media savvy in the world is not enough. You must figure out how to persuade people who do not already agree with you. It is a lesson the new stars of the left need to learn.

Column | New stars of the left need to learn to persuade

EarthBeat Weekly: We've turned the heat up in cities, so how can we cool them down?