One small step for economic recovery, avoiding one giant leap toward Putinism 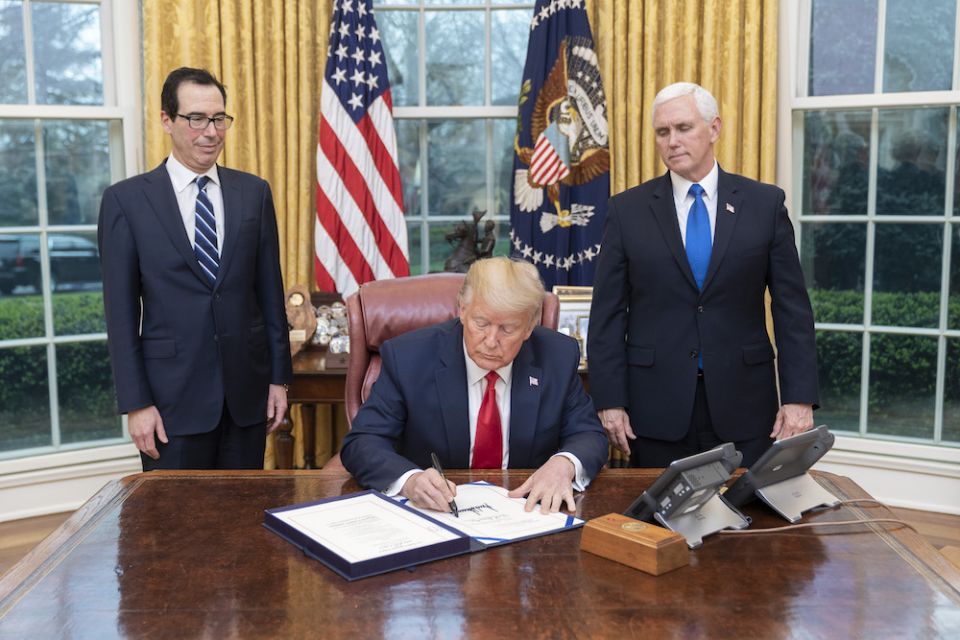 President Donald Trump is joined by Vice President Mike Pence, right, and Secretary of the Treasury Steven Mnuchin as he signs H.R. 6201, the Families First Coronavirus Response Act, March 18 in the Oval Office of the White House. The act provides for paid sick leave for qualifying workers and gives funding to a variety of government departments and programs for COVID-19 testing, among other things. (Flickr/White House/Shealah Craighead)

Good morning. By the time you read this, America will have narrowly avoided taking one giant leap toward Putinism.

As part of the obviously needed stimulus package, the Trump administration along with the Republican-controlled Senate, wanted to dedicate $500 billion to help corporations and would have left the dispersal of that enormous amount of money entirely to the discretionary authority of Secretary of the Treasury Steven Mnuchin. He would have been free to help his friends and punish his enemies — but let us assume for a minute that Mnuchin would not be so mercenary. He still has the wrong values to be given such discretion and is saddled with a top-down view of the economy that, if allowed to strengthen its hold on the government, would put our nation on the road to an oligarchy such as we have not witnessed since the Gilded Age. Senate Democrats were right to resist.

In 2017, when the economy was humming along, Mnuchin steered through Congress an enormous tax cut that disproportionately delivered huge sums of money to large corporations. We were promised that this infusion of capital would result in those corporations making further investments in the economy and job training, setting the stage for long-term economic growth. Of course, many companies instead gave huge bonuses to their executives and/or engaged in significant stock buybacks, another way of enriching the already rich. That was foreseeable when the law was enacted and, indeed, the Democrats in the Senate warned against that tax cut, but to no avail.

This kind of crony capitalism was not new to Mnuchin. He and several other top Trump economic advisers used the economic meltdown of 2007-2008 and the stimulus of 2009 to enrich themselves. "The problem with people like this is that they think that what's good for Wall Street or high finance is good for America," said Dennis Kelleher, head of Better Markets, a non-profit that advocates for increased market regulation. "The crash proved that what could be incredibly good for Wall Street was, in fact, incredibly bad for America." The episode also shows how the distinction between Wall Street stooge and non-Wall Street stooge is more important than that between Democrats and Republicans. In 2009, President Barack Obama's Secretary of the Treasury Tim Geithner also had enormous discretionary powers and made sure Wall Street was made whole first.

The Democratic mantra in the Senate — and the House — must be, "Fool me once…"

Shame, too, on the mainstream media for headlines that suggested something other than a power grab was going on, that this was mere typical partisanship. "Coronavirus rescue package stalls after Democrats defeat key vote," was the Politico headline Monday evening. "Democrats again block key vote on $2 trillion coronavirus bill as Senate floor erupts with partisan anger," led The Washington Post. You do not need an advanced degree in politics or history to find Senate Majority Leader Mitch McConnell's fretting about the lack of bipartisanship a bit like Eva Perón complaining she can't sleep with all those descamisados calling her name outside the Casa Rosada.

Back in 2009, when Obama was trying to get a stimulus passed, McConnell displayed his historical sensibility saying, "If you started the day Jesus Christ was born and you spent a million dollars every day since then you still would not have spent a trillion dollars." During his famous 2010 interview when he said his principal goal was making Obama a one-term president, he also said, "I don't want the president to fail; I want him to change," which is exactly what Senate Democrats could say today about the majority leader. In 2016, McConnell broke all precedent when he refused to grant a hearing or a vote on Obama's nomination of Judge Merrick Garland to the Supreme Court. But now he is concerned about bipartisanship. Please. McConnell's dramatic pleas for bipartisanship put me in mind of Oscar Levant's famous comment about Doris Day, that he knew her "before she became a virgin."

The House plan, all 1,400 pages of it, suffered from its own complexity. However fine its policy prescriptions, it is a political dud because it is too unwieldy, and too late, to communicate effectively. It reflects the degree to which the leadership of the House of Representatives is so far removed from political reality. They were largely absent from the airwaves on Monday when they needed to be making their case to the American people. Alas, it is a skill that has become dull in their hands. The House leaders represent overwhelmingly Democratic districts where they never really have to make the case to voters for their reelection. No one is better at the inside game than Speaker of the House Nancy Pelosi, but who in the party is attending to the electorate that is scared and desperate for leadership? And why wasn't their proposal ready first so McConnell could not even suggest it was the Democrats who are the ones stalling?

This will not be the last rescue package. What Congress decides in the weeks ahead will either strengthen our democracy or weaken it, perhaps irretrievably. When the farmers of the Po Valley threw in with Mussolini in 1920-1922, there was no looking back. When German industrialists backed the Nazis, there was no looking back. I have been rereading Robert Paxton's The Anatomy of Fascism, and while fascism developed differently in each country where it came to power, the uniting of political and economic power to break unions and other organizations of solidarity was one of the essential building blocks. History has offered her warning.

We are told we must come together as a people, but no one can insist that we forget what we know. If we are called to come together to strengthen the social bonds of solidarity, it will be obvious and easy to support policies that incarnate that solidarity. If we are asked to come together so that it is easier for Mnuchin to pick our pockets, handing the taxpayers a multi-trillion-dollar bill to support corporations that have not paid any taxes in a long time, putting us further down the road to fascist oligarchy, then we have every right to point out the hypocrisy and decline the offer. This week, Senate Democrats refused to be bullied into signing off on a bill with no oversight, and our democracy is a bit more safe. They need to stay dug in whenever Trump, Mnuchin and McConnell try and pull off another power grab.

Column | One small step for economic recovery, avoiding one giant leap toward Putinism

Time is now for Democrats, Joe Biden to shape this narrative