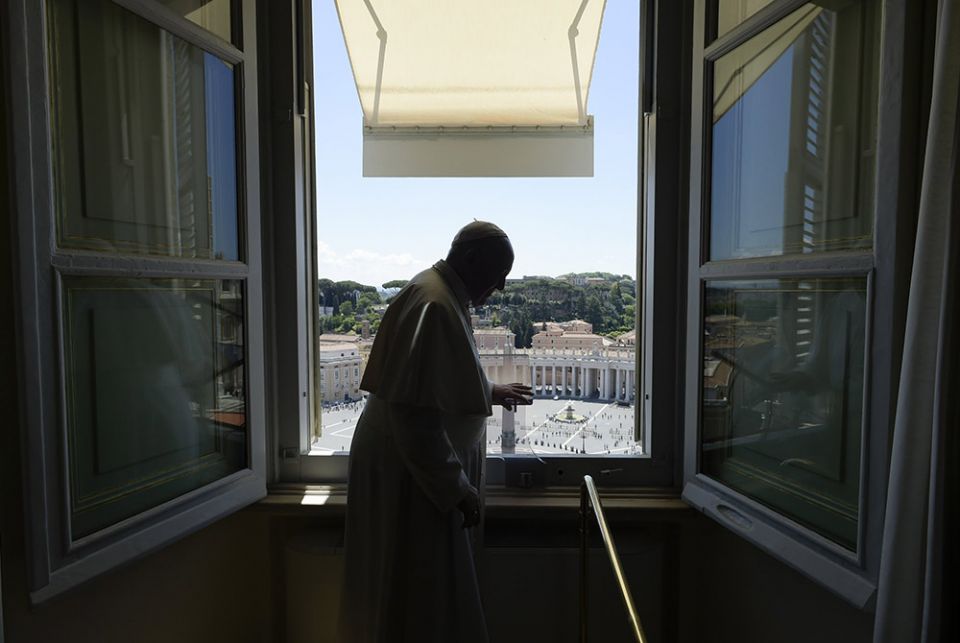 Pope Francis finishes leading the "Regina Coeli" from the window of his studio overlooking St. Peter's Square May 31 at the Vatican. Church officials released the 2019 budget report Oct. 1. (CNS/Vatican Media)

Jesus warned us that money and faith do not mix very well. And one of the greatest tragedies in the history of Christendom, the Reformation, was sparked in part by disgust at the wealth that had been accumulated by the successors of Peter and the cardinals who advised them. Closer to our own time, we can recall the memory of Chicago-born Archbishop Paul Marcinkus who led the Vatican bank into a series of shady investments and the Banco Ambrosiano scandal, for which the Vatican paid out $244 million to the failed bank's creditors.

So, the allegations of financial malfeasance surrounding Cardinal Giovanni Angelo Becciu are not entirely surprising. Much remains to be learned, but this much is clear already: Pope Francis' reputation before history as a reformer will depend in large part on his ability to confront this scandal head on and use it to uproot the procedures, policies and personalities that made it possible.

The current scandal broke into public view almost a year ago when police raided the Vatican Secretariat of State looking for evidence of financial wrongdoing. Shortly after, the head of the Vatican's "watchdog" agency for financial matters, Rene Brülhart, resigned at the end of his five-year term, in part because the police had also raided his office. Brülhart was considered a straight shooter and so the decision likely raised alarms at international watchdog agencies. The decision to raid Brülhart's office apparently resulted in the resignation of the police chief.

Then, at the beginning of the summer, the Vatican announced the arrest of investor Gianluigi Torzi on charges of extortion, fraud and money laundering after details of a shady real estate deal involving luxury apartments in London came to light. Commenting on that mess earlier this month, the head of the Vatican Secretariat for the Economy, Jesuit Fr. Juan Antonio Guerrero Alves, said the Holy See had been "swindled" by its investors. 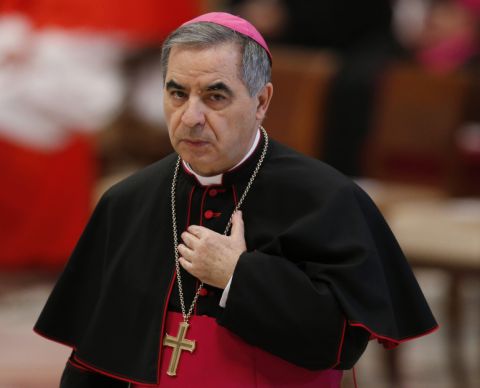 The stakes hit the roof, however, last month when Becciu was removed as prefect of the Congregation for the Causes of Saints, his rights as a cardinal were stripped from him, and he held a press conference where he filled in some of the details the Vatican press office had not regarding the charges against him. And, last week, a laywoman, Cecilia Marogna, was arrested by Italian police on a Vatican warrant. Marogna's firm apparently received hundreds of thousands of euros from her fellow Sardinian, Becciu.

What a mess! "Things are going to get worse, probably a lot worse, before they get better," a well connected prelate told me about the unfolding financial scandal.

Pope Francis famously does not like to humiliate subordinates publicly. He may find himself forced to do a better job explaining what the investigations he authorized have found and how he plans to confront this recurring corruption. It is hard to see how the corruption can be eradicated without a large infusion of mandatory transparency. There is a reason most decent regimes have adopted financial transparency regulations and support international organizations that help ferret out corruption, money laundering and other fiscal crimes.

The Gospel has a verse that is on point, Matthew 5:15 — "nor does anyone light a lamp and put it under a basket, but on the lampstand, and it gives light to all who are in the house" — but there are other Gospel values at stake, especially for a pope: mercy, non-judgmentalism, compassion. Trying to reform the Vatican must be like living with an alcoholic: You want to be supportive without becoming an enabler, you know you can't trust the veracity of what you are told, and the most loving thing you can do is say "no." Perhaps the Holy Father and his team should start attending Al-Anon.

Transparency has its own pedagogy and timeline, and it is not clear that Pope Francis is willing to embrace it at the expense of those other Gospel values. Certainly, he is indifferent to the norms and expectations of public relations, as we all discovered two years ago when the pope refused to respond to the fantastic allegations leveled by disgraced former nuncio Archbishop Carlo Maria Viganò. In a typical western democracy, the charges against Becciu would have been made public by now, and doing so not only serves the value of transparency, it also can serve to protect the reputation of the accused who is not subject to all manner of speculation.

Will the pope succeed in rooting out the corruption? It is hard to know. Like clergy sex abuse, the rooting out will demand a zero tolerance stance. The introduction of experts will be necessary, but there is no reason to think laypeople will be less likely to feather their nest than clergy.

The ability of Vatican diplomats, both those in the field as nuncios and those working in the Vatican curia, to misuse church funds is so enormous, it is difficult to see how you can reform the financial situation without also reforming the diplomatic corps. And, the inverse relationship between accountability and rising through the hierarchic ranks – the higher you go, the less accountable you become – is a standing invitation to abuse.

There may be one surprising ally who could make the pope's work easier: If Becciu tries to take down others with him, he could point investigators to malfeasance it might otherwise take them a long time to unearth. Pope Francis is not the kind of person who dances with the devil, but he is shrewd beyond measure.