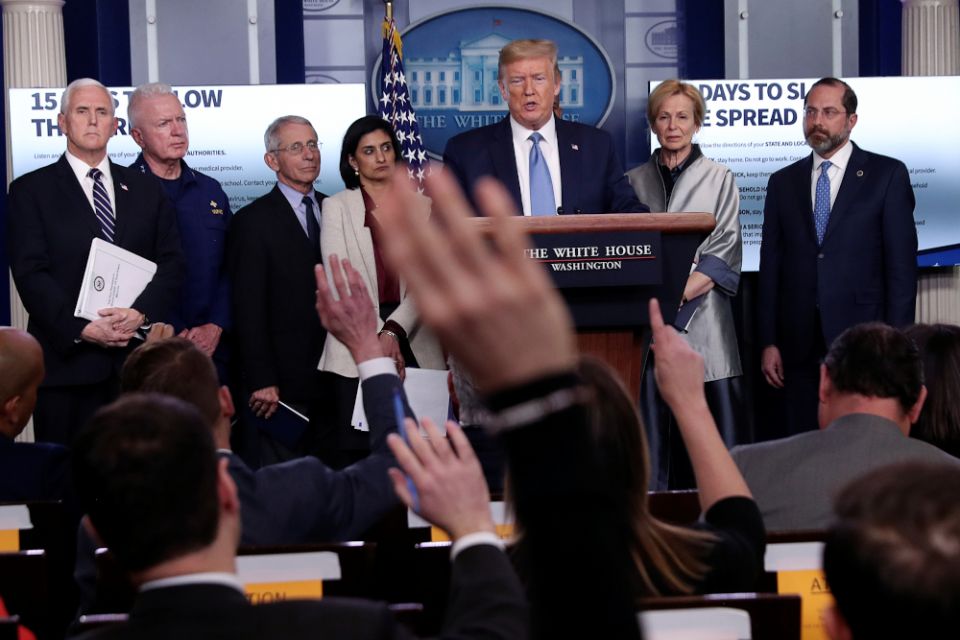 What is scarier than COVID-19? The rightwing conspiracies swirling around COVID-19. Moments like these bring people to show their truest selves, if not always their best selves. As Simeon said to Mary: "and you yourself a sword will pierce so that the thoughts of many hearts may be revealed" (Luke 2:35).

The president has been foolish, and because he is in a position of responsibility, his foolishness has been costly. At The New York Times, David Leonhardt did us the favor of collating some of the president's irresponsible comments. My favorite? On Feb. 19, the president told a Phoenix, Arizona, television station, "I think the numbers are going to get progressively better as we go along." That would have been true if he had been talking about former Vice President Joe Biden's numbers, not the coronavirus.

The most common thread among President Donald Trump's many idiocies has been "we have it totally under control," which the president said back on Jan. 22, on a variety of occasions since and which he repeated again on Monday. The fact is that the virus is nowhere near being under control. The president's lies led to one of the more remarkable shifts in public opinion in my lifetime: in February, 72% of Republicans said they thought the threat posed by the coronavirus was real, but now only 40% of Republicans deem the threat real according to an NPR/PBS NewsHour/Marist poll, a shift well beyond the poll's 4.8% margin of error.

Libertarians were having a hard time adjusting their philosophic framework to the demands of mental health. "Don't tread on me" is not a helpful attitude during a public health crisis. Oklahoma Gov. Kevin Stitt sent out a tweet encouraging people to go to restaurants, accompanied by a photo of himself with his children in a "packed" restaurant. California Rep. Devin Nunes proclaimed "it's a great time to … go to the local restaurant," except it really wasn't. The Mises Institute, one of the keepers of the libertarian flame, praised the response in South Korea as opposed to that in Italy, attributing it to the fact that most hospitals in South Korea are privately owned, breezing past the fact that South Korea has a single payer system akin to Medicare for All.

The president's official megaphone, Fox News, has spent the better part of the last two months singing variations on the old Bobby McFerrin song, "Don't Worry, Be Happy." (The characters in the video could actually double for the crowd of befuddled administration folk standing behind the president's podium!) Now, they are praising the president's "bold" leadership. But the damage was done and innocent people exposed themselves unnecessarily to the deadly virus.

Holding out false hopes is dangerous. It encourages people to not take the threat seriously. And Trumpworld is never without people willing to traffic in craziness. David Clarke, the former Milwaukee County sheriff who was a prominent Trump surrogate in 2016, spouted some of the craziest and ugliest theories. "Not ONE media outlet has asked about George Soros's involvement in this FLU panic," Clarke tweeted. "He is SOMEWHERE involved in this." Nothing like a little anti-Semitism to spice things up. Clarke, like Nunes, also encouraged people (he has 917,000 Twitter followers) to go out to bars and restaurants, ignoring the advice from the Centers for Disease Control and Prevention. Twitter took down his dangerous tweets.

Religious conservatives have not been far behind their secular counterparts in exposing their ideological insanity. The Latin Mass Society insisted that communion could not be received in the hand, despite the almost too obvious dangers posed by the priest putting his fingers in people's mouths. Archbishop Alexander Sample of Portland, Oregon, even issued a decree banning his priests from insisting on giving communion in the hand. We have to get our priorities correct. Archbishop Carlo Maria Viganò, always quick to criticize, objected to the decisions being made in Italy to suspend public Masses. I had no idea the archbishop had collected a graduate degree in public health.

My favorite of the conservative Catholic takes on the virus came from Taylor Marshall, who invoked the Hebrew Scriptures as a precedent for assigning the blame for COVID-19 on Pope Francis' introduction of idolatry in the form of Pachamama during last year's Amazon synod. It is stunning to see people who claim to be religious so quick to usurp the sovereignty of God in affirming why certain things happen. Marshall had to abandon his theory of divine vengeance however when it was learned that Alexander Tschugguel, the man who threw the Pachamama statue into the Tiber and videotaped his vandalism, has contracted the coronavirus.

It is stunning to see people who claim to be religious so quick to usurp the sovereignty of God in affirming why certain things happen.

Leave to Bishop Joseph Strickland of Tyler, Texas, to bridge the libertarian politicos with the Catholic right. In a tweet last weekend, he wrote, "As we all navigate this Pandemic I hope we can all calmly consider the most prudent choice for ourselves & for the sake of others. Do I attend Church, another gathering, attend a meeting? Please don't just do what you're told. We all need to make important decisions ourselves." No, actually. People are well advised to do what public health officials tell them to do. You half expect the bishop to accompany the Eucharistic processions for which he called with Gadsden "Don't tread on me" flags as well as a bit of incense. In the event, his sad little procession was so poorly attended it probably did not cause a health danger, as I only counted eight people in attendance, nine if you include the Lord Jesus. Seriously, the bishop is a public health menace. Is that not enough to demand his resignation?

Strickland was not alone. A Florida Protestant pastor defended his decision not only to hold services but to have attendees greeted with handshakes. "This Bible School is open because we are raising revivalists not pansies," he said. This prompted the absolute best tweet of the crisis so far, from Don Clemmer, a frequent freelancer here at NCR: "Playing right into Darwin's hand…"

What a world we live in. I hope everyone stays safe. Living out here in the boonies, in a town of 1,700 souls, a 15-minute drive from the nearest supermarket, I am quite accustomed to a bit of social isolation. Heretofore, the primary benefit has been time to read more books, but now I have the added joy of knowing how wrong Karl Marx was when he wrote in The Communist Manifesto about "the idiocy of rural life." It is the idiocy of the ideologically-driven that is more worrisome.