Should bishops refrain from criticizing each other in public? 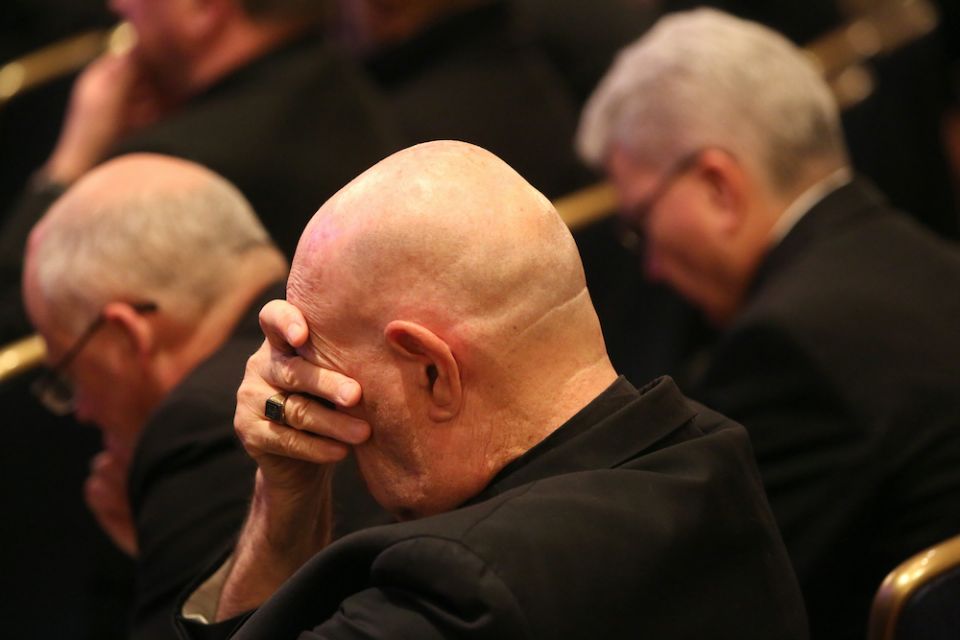 Bishops pray before the Blessed Sacrament in the chapel during a day of prayer Nov. 12, 2019, before hearing from abuse survivors at the fall general assembly of the U.S. Conference of Catholic Bishops in Baltimore. (CNS photo/Bob Roller)

o·mer·tà / ōˈmertə — noun: (as practiced by the Mafia) a code of silence about criminal activity and a refusal to give evidence to authorities

The U.S. bishops' practice of never criticizing one another in public is not exactly the same thing as omertà, but sometimes it is difficult to tell the difference. For the higher clergy, the prohibition extends to legal activity as well as illegal. The lack of accountability embedded in the practice does not necessarily reach upward to "the authorities" — popes rarely remove bishops except for the most grievous of offenses — but downward to the people in the pews. Certainly, the practice impeded, it did not assist, the kind of corporate responsibility that should have been forthcoming in the face of the clergy sex-abuse scandal.

This week, the ethic of non-public criticism among prelates was put to the test by New York Cardinal Timothy Dolan's obsequiousness towards President Donald Trump on a now famous phone call on April 25 and by Dolan's subsequent media appearances in which he has doubled down, the way the president doubles down when he goes too far. Privately, there was plenty of consternation. Why not just get it all out in the open?

Good reasons exist to maintain the rule. If a bishop were to publicly denounce Dolan's fawning attitude to Trump, a group of people would surely gravitate to that bishop and another group would gravitate toward Dolan. The divisiveness and polarization of the political culture would seep even further into the church. Make no mistake: For 50 years, our culture has been watching one norm after another crumble, and it is not a sign of societal health.

There is biblical warrant for the practice: "If your brother sins, go and show him his fault in private; if he listens to you, you have won your brother" (Matthew 18:15). Of course, if the brother does not listen, the Bible does not say, "Let it drop."

The best reason however is that the unity of the church should be more important to a bishop than any political stance, no matter how egregious. We are warned by the psalmist not to put our trust in princes and told by the savior to seek first his kingdom. Bishops should exemplify the priorities embedded in those twin admonitions.

Alas, some bishops do not always follow the no-criticism-in-public rule. Former papal nuncio Archbishop Carlo Maria Viganò did not have any problems criticizing the bishop of Rome in his various testimonies. In his first such testimony, he accused former Baltimore Archbishop Cardinal Edwin O'Brien of belonging to a "homosexual current" and called Washington Archbishop Cardinal Donald Wuerl a liar. But that was a rarity. When Detroit Auxiliary Bishop Thomas Gumbleton endorsed the presidential candidacy of Sen. George McGovern in 1972, he was not publicly criticized by other bishops, although they privately dismissed his statement.

Cultural norms, like any human creation, are marked by sin, and even the best of norms can be defiled or gutted of value when egos and power impinge upon them. The real difficulty with the fallout over the Dolan-Trump call is that when one bishop or group of bishops decides to act in ways that push the envelope, do not consult their brothers beforehand and say something publicly with which they know many of their brother bishops do not agree, they undermine the unity of the church. The no-public-criticism rule serves to strengthen the undermining, not resist it.

You witnessed this last year, when the more "abortion, first and only" bishops slipped in an amendment to the document on voting, "Forming Consciences for Faithful Citizenship," calling abortion the bishops' "preeminent priority" in this election, and they did it at the last minute. For years, the drafters of "Faithful Citizenship," mindful of the divisions within the conference, bent over backward to make sure different groups were happy with the document's treatment of the issue(s) that mattered most to them, achieving a kind of balance. Now, the staff leadership has taken sides. There was no theological teaching of the church to support the labeling of abortion as preeminent, but removing it in a floor vote would have looked like the bishops were de-emphasizing their pro-life commitment. Had it not been slipped into the draft, I suspect the bishops would not have voted to add it. There is a dynamic in any legislative assembly, and the conservatives who had been trying to slip the word into the document for years finally figured out how to do it. And they were willing to wound the unity of the body to achieve their goal. There was a sense that some of the bishops were not merely wrong about the theology but that they had acted in bad faith.

There have always been divisions among the bishops. In the late 1800s and first decades of the 20th century, the Americanizers led by Archbishop John Ireland of St. Paul, Minnesota, were always fighting with the conservatives and the German bishops under the leadership of New York Archbishop Michael Corrigan. In the 1920s, the second generation of Americanizers supported the creation of the bishops' conference, but the Romanists, led by Boston Cardinal William Henry O'Connell, tried to get it suppressed. It was easier to paper over those differences when there were fewer reporters and no internet around.

The Second Vatican Council also witnessed sometimes intense differences of theological opinion, and the council fathers were not always able to achieve a synthesis. In his weighty new analysis, The Vision of Vatican II: Its Fundamental Principles, Ormond Rush writes, "The drafting commissions, faithful to their responsibility, genuinely attempted to incorporate the various perspectives, as their reports (relationes) to the assembly reveal. The result is often a juxtaposition of different theological approaches within the same treatment of a particular subject. … Whatever the differentiating aspect, the juxtaposition in the final texts is not so much one of contradictory views but rather of differing perspectives on the same mystery."

This was the previous approach employed in the drafting of "Faithful Citizenship," but once the conference staff decided to choose sides among the bishops, it was abandoned.

What to do now? Pope Francis has pointed the way. "This is a problem also in other countries, especially where there is no synodal process or synodal style," Villanova University ecclesiologist Massimo Faggioli told me when I asked about the no-public-criticism rule. "Now, I think it would be unseemly for another cardinal or a bishop to pen an op-ed criticizing Cardinal Dolan for his opening to Trump. But I would expect from other cardinals or bishops to say something different from what Dolan has said — especially a wrong understanding of 'accompaniment.' The problem is that in absence of an ecclesial, synodal ethos of debate, everything is left to the power dynamics shaped by the media (both secular and Catholic media)."

Synodality, as both a method and a mindset, would have prevented this train wreck Dolan has foisted on the church.

I hope Faggioli will expound upon this theme at greater length: sorting through the theological implications of this recent controversy, and how they point to the need for synodality, is best left in the hands of sound ecclesiologists, not newspaper columnists. But Faggioli's insight undoubtedly helps explain the unconscionable behavior of key staffers at the U.S. bishops' conference in recent days, and I shall pick up that thread on Monday.

Column | Should bishops refrain from criticizing each other in public?

With failed Baltimore meeting, the church is at a stalemate