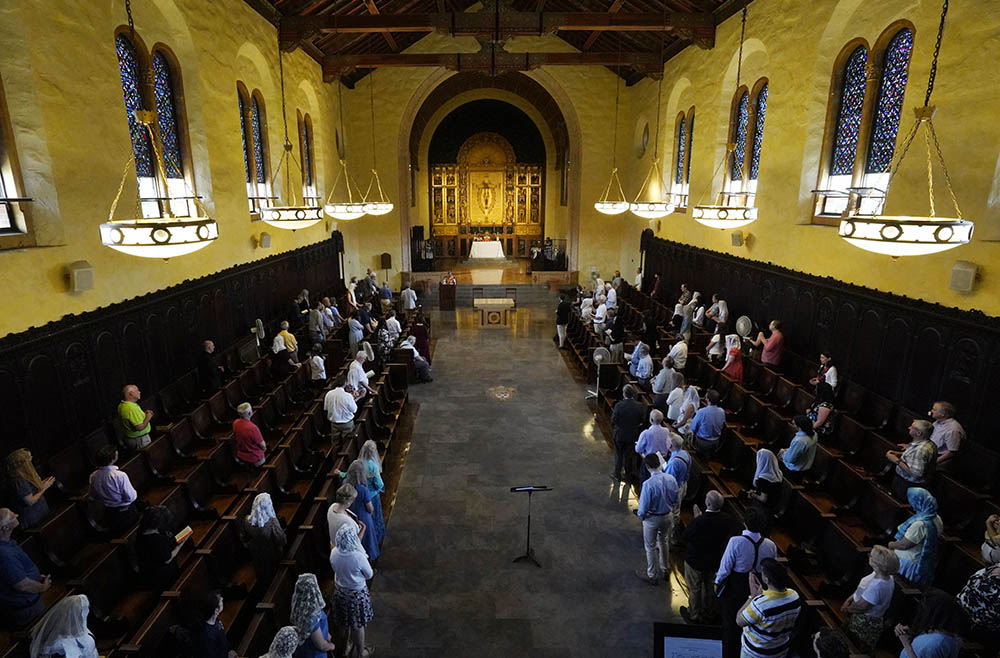 What does the reaction to Traditionis Custodes, Pope Francis' motu proprio restoring the restrictions on the traditional Latin Mass that existed before 2007, tell us about the necessity of the document? And what about the prospects for ecclesial unity that Francis cited as his rationale for taking this decision?

It is important to distinguish between those who simply found the antiquity of the old rite a comfort in a fast-changing world, or those for whom the traditional Latin Mass offered an aesthetic that served to mediate the divine, and those for whom the Tridentine liturgy was a kind of ideological statement displaying their opposition to the Second Vatican Council.

It is often easy to spot the latter group: They have websites. And those websites, in recent days, have been spewing venom that unwittingly demonstrates how necessary Francis' decision was.

At the website of the Society of St. Hugh of Cluny, a Connecticut-based group, Stuart Chessman heaped scorn upon the pope. But as his anger, not any Catholic theology, developed his argument it became clear that he saw the old rite as a kind of bulwark against the post-conciliar church. He wrote:

The reasoning is often transparently dishonest. What are we to say, for example, of the passage in the Motu Proprio quoting St. Augustine for the proposition that remaining in the Church "with the heart" is a "condition of salvation" — after the unrestricted ecumenism of the last 60 years? Or of Francis' insistence on "unity" and "communion" as almost exclusive criteria of Catholicism, when every day the fundamental tenets of Catholic theology and morality are challenged — often with the express or implicit support of the Pope (e.g., the prohibitions of divorce, abortion, homosexual behavior)?

Sixty years of "unrestricted ecumenism"? A little later in his commentary, he states: "The real problem is not traditionalism, but the manifest, catastrophic failures of the Vatican Council, the Novus Ordo and the ultramontanist organization of the Catholic Church."

At "Fr. Z's Blog," Fr. John Zuhlsdorf writes that the plight of old rite devotees is akin to that of Black Americans in the segregated South, only worse. The traditionalists are being consigned to conditions that are "separate but unequal" Zuhlsdorf wrote. The comparison is as offensive as it is absurd.

The journalists at LifeSiteNews called the pope's document "cruel" and "hateful."

If you want to see "hateful," check out the comment section on any of these traditional Latin Mass websites. The vitriol directed at Francis is unlike anything I have ever witnessed.

Compare this hysteria to the measured and thoughtful responses of the men who will be called upon to implement the pope's new directive, the bishops.

"I will prayerfully reflect upon Traditionis custodes in the coming weeks to ensure we understand fully the Holy Father's intentions and consider carefully how they are realized in the Archdiocese of Washington," wrote Washington Cardinal Wilton Gregory in a letter to his priests. "In the interim, I hereby grant the faculty to those who celebrate the Mass using the liturgical books issued before 1970 to continue to do so this weekend and in the days to come, until further guidance is forthcoming."

Archbishop José Gomez, president of the U.S. bishops' conference, issued a short statement that read, in part, "I welcome the Holy Father's desire to foster unity among Catholics who celebrate the Roman Rite. As these new norms are implemented, I encourage my brother bishops to work with care, patience, justice, and charity as together we foster a Eucharistic renewal in our nation."

Archbishop Bernard Hebda of St. Paul-Minneapolis said he "will need some time to study the new norms, examine our local situation and seek counsel. ... I am happy to grant the necessary faculties so that those priests who are already celebrating the rites of the extraordinary form may continue to do."

That doesn't sound very harsh, does it?

In short, the pastors of the church are approaching this issue pastorally. No one is being kicked to the curb. This is not the stuff of analogies to Jim Crow. This is not what a blitzkrieg looks like.

We know that the word "catholic" means "universal," but we tend to think in terms of global. Indeed, when one travels abroad and goes to Mass in a different country, it is always possible to follow along even if you do not understand the words: You know when to kneel and when to stand, you know when the priests is saying the words of consecration, you know when the "Our Father" is being prayed, etc. The prayer of the church not only crosses national boundaries, it crosses through time, as each Mass unites us with the sacrifice of Christ on the cross, with the church through the centuries, and with the communion of saints in eternity.

In these days, however, it behooves us to think of "catholic" and "universal" not so much in their reach as in their specificity. That is, the love of Christ can be born and find expression not only in every culture but in every human heart. Some human hearts prefer the folk Masses of the 1970s, some prefer the Gregorian chant of a Tridentine rite, and some prefer a quick Mass, with no music because, well, I do not know why, but it is not my place to question it.

Our grandparents did not question the aesthetics of the Mass at their local church in the same way they would not have thought to question why they ate the same foods or dressed in the same styles of clothes as their neighbors. Whatever limitations have emerged in the territorial parish model, it was built upon the solid foundation of a theological principle, and that principle was the catholicity of the Catholic Church.

Had the celebration of the pre-Vatican II liturgy become what Pope Benedict XVI had hoped it would become, a source of mutual enrichment for the two liturgical expressions of the same Catholic faith, Francis would not have had to take the step he did to rein in the old liturgy.

I feel truly sorry for those who became attached to the old rite in recent years but may now have trouble finding a church where it is celebrated. I hope they will speak to their pastors and see if some of the beauty they appreciated about the old rite might not find expression in the new; if some of the music might be shared. The simple desire to feel a part of an ancient tradition is not an evil desire.

But some people, like those with websites cited above, used the rite as a vehicle to question the Catholic faith, not to teach it. They thought their opinions matter more than the teachings of an ecumenical council. They even targeted seminarians, with some success, trying to impress on those young minds a hermeneutic of suspicion regarding the orthodoxy of the post-conciliar church. They have no one to blame but themselves for this turn of events.

This should not, in the final analysis, become a time for blame but a time for growth. Not in the number of people attending Mass every week: That will happen or not happen as the Spirit moves and we will only see the rustling of the leaves on the tree which is the church.

No, it is a time for growth in charity toward one another, an openness to sharing divergent liturgical tastes and different desires of the human heart, a commitment to renewing the unity of the church, built upon our common faith and the liturgy that is the source and summit of that faith.

It is time to put the "catholic" back into the Catholic Church.