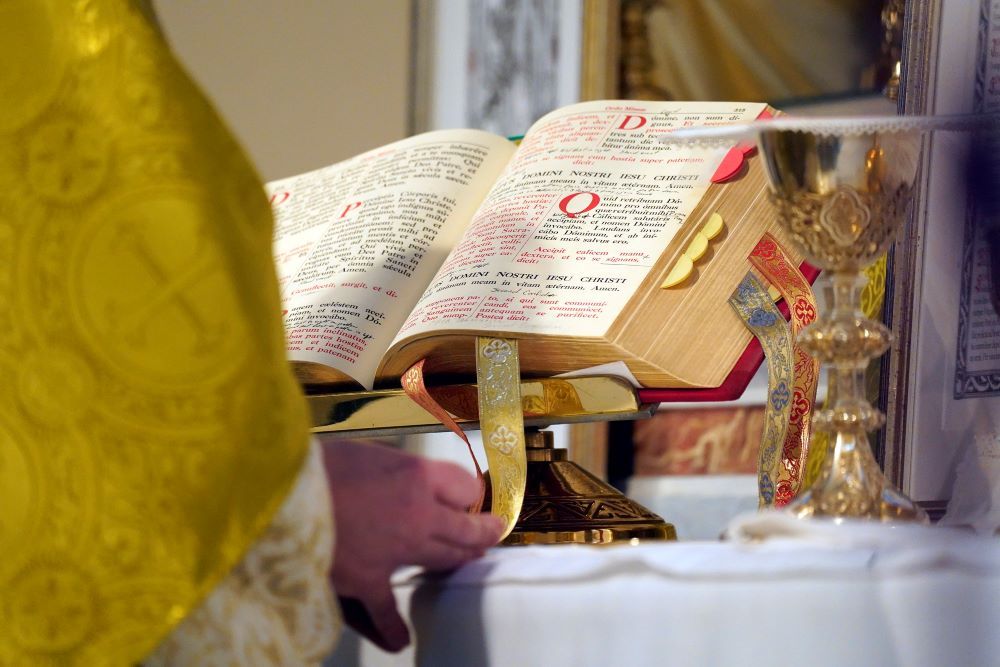 A sacramentary is seen on the altar during a traditional Tridentine Mass July 18 at St. Josaphat Church in the Queens borough of New York City. (CNS/Gregory A. Shemitz)

In the weeks following Pope Francis' Traditionis Custodes, the motu proprio rendering his decision to revoke the permissions to celebrate the traditional Latin Mass contained in the 2007 motu proprio Summorum Pontificum, there has been a great deal of wailing and gnashing of teeth by those who champion the old rite. Many of them have proven why Pope Francis was right to do what he did: The traditional Latin Mass had become an incubator for division. Schism is in the air along with the incense.

The traditional Latin Mass had become an incubator for division. Schism is in the air along with the incense.

Top of the list is Michael Brendan Dougherty, of National Review, for an op-ed in the New York Times. Dougherty gets a lot wrong for someone who claims to be a journalist. He suggests that Gregorian chant only flourished after Summorum, but I worshiped at the Cathedral of St. Matthew the Apostle in Washington since 1985 and we had Gregorian chant at every 10 a.m. Mass. They also have it at St. Paul's Cambridge outside Boston. And St. Clement's in Chicago. And in lots of churches.

He applauds "British cultural luminaries" who wrote to Pope Paul VI asking him to retain the old rite. Dougherty seems especially impressed that the authors cited the rite's inspiration of countless works of art, that their letter "doesn't even pretend to be from believing Christians." That is an odd, utilitarian encomium for someone so wrapped up in the worship of the Almighty.

Dougherty exhibits a fixation on the tabernacle. These were never "torn up," as he asserts, but were sometimes relocated to a more peaceful chapel where prayer before the Blessed Sacrament was just as possible as before, sometimes more so. I do not deny there were a few iconoclastic disasters after the Council, but they were anecdotal not systemic. Dougherty thinks it is somehow important that the tabernacle be on the altar of sacrifice, but why he thinks this is not clear. Are day-old consecrated hosts somehow more divine than the hosts the priest just consecrated?

It is these sentences, however, by which Dougherty unwittingly proves Pope Francis was correct:

There you have it. For all his effort to distance himself from "schismatics" earlier in the commentary, he shows he is determined to make his children schismatics in the end. Religion is not, for him, about binding oneself to the community of the faithful that has been faithful to the Lord's command to "do this in memory of me" through the centuries. Religion is not about fidelity to the tradition of faith and its authoritative leaders. It is about vindicating his tastes. His iteration of cafeteria Catholicism might be high-brow in his own eyes, but it is still cafeteria Catholicism.

First Things was a hotbed for dissent against Pope Francis' decision. The worst was the column by Martin Mosebach, which demonstrated a truly remarkable ignorance of actual Catholic teaching, even while claiming that those committed to the old rite exhibited "a serious and enthusiastic devotion to the complete fullness of Catholicism."

Did they? I would think accepting the teaching and the rite of an ecumenical council would be part of the "fullness of Catholicism."

Mosebach also demonstrated a complete misunderstanding of liturgical history when he wrote, "Tradition stands above the pope. The old Mass, rooted deep in the first Christian millennium, is as a matter of principle beyond the pope's authority to prohibit. Many provisions of Pope Benedict's motu proprio can be set aside or modified, but this magisterial decision cannot be so easily done away with."

Has he even heard of the liturgical movement, which began in the 19th century and led to the Constitution of the Divine Liturgy, Sacrosanctum Concilium, at Vatican II? The Council – and several popes previously, including the conservative Pope Pius XII and the reactionary Pius X – were constantly renewing our liturgical forms. Pius X lowered the age for First Communion and encouraged frequent reception by all. Pius XII brought back the Easter Vigil, which changed not only our Holy Week liturgies but our ecclesiology: The emphasis on baptism and the baptized at Vatican II would have been unimaginable if Pius had not restored the Easter Vigil.

George Weigel, also at First Things, did invoke Pius XII and made a great deal of sense in his defense of the Novus Ordo. But he complained that Traditionis Custodes "was theologically incoherent, pastorally divisive, unnecessary, cruel — and a sorry example of the liberal bullying that has become all too familiar in Rome recently."

All too familiar? I seem to remember Weigel's hero St. Pope John Paul II having professors removed from their academic chairs because they fell afoul of his interpretations of Vatican II. I actually think some of the removals were warranted and have no problem conceding that Rome has the right to rule on such matters. But if Traditionis Custodes is bullying, and bullying is bad, wasn’t John Paul II guilty of it also? Or is it just "liberal bullying" that irks Weigel? Most people wonder why Francis has been so willing to tolerate opposition from his own cardinals and others in the curia who seek to undermine his initiatives.

The morning the news broke about Pope Francis' decision, I voiced my concern for those who were devoted to the old rite but did not buy into all the ideological nonsense that often came with it. But in the weeks since, Francis has been proven right. The traditional Latin Mass led to a distorted ecclesiology and, at least in America, opened a new battlefront in the culture wars. If you doubt the pope was right, you have only to listen to his critics.