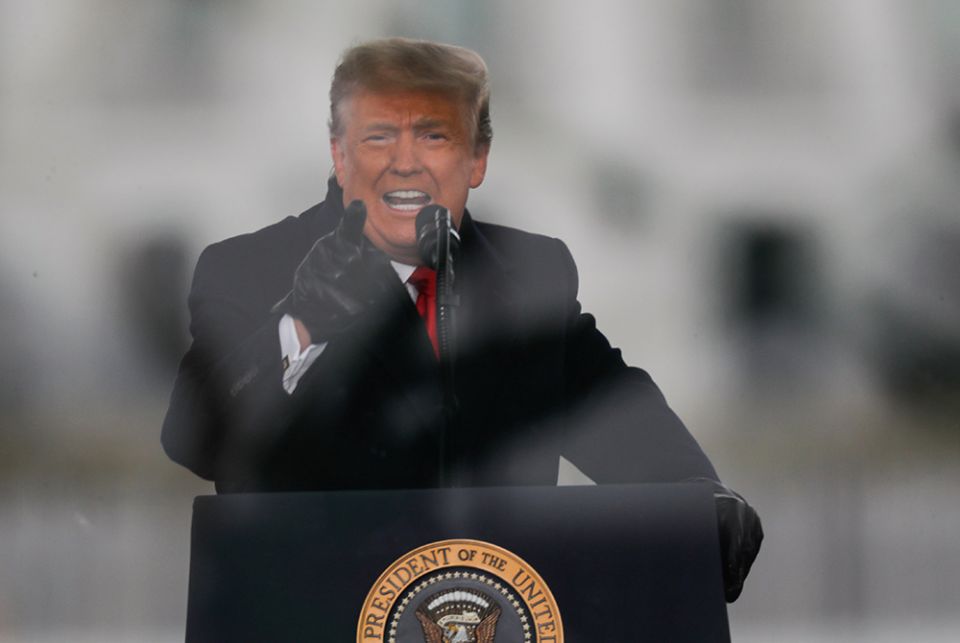 President Donald Trump speaks near the White House Jan. 6 in Washington, during a rally to contest the certification of the 2020 presidential election. (CNS/Jim Bourg, Reuters)

At the start of the impeachment trial last week, the Rev. Barry Black, chaplain to the U.S. Senate, offered a prayer in which he quoted from poet James Russell Lowell's "The Present Crisis":

Once to every man and nation comes the moment to decide,
In the strife of Truth with Falsehood, for the good or evil side.

It was a powerful invocation at such a moment, and the minister's follow-up question was equally pointed: "Could it really be that simple?"

The former president, Donald Trump, stood accused of inciting an insurrection. The connection between words and actions is never an easy and straightforward instance of causality. It is one of the triumphs of liberalism to have made speech immune from government censure. As I noted last week, this was not a criminal proceeding but a political one, and so the standard of proof was, in a sense, whatever the Congress determines it to be. They must decide what is and is not beyond the pale.

The House managers spent hours making the case that without Trump's words, there would have been no mob storming the Capitol. One of the most powerful videos showed a man with a bullhorn, reading a tweet the president had just sent, excoriating Vice President Mike Pence. The crowd responded by calling Pence a traitor. Some chanted, "Hang Mike Pence." Someone had even thought to bring a noose that was mounted outside the citadel of democracy. It was hard not to see the connection between Trump's words and the crowd's actions.

The House managers also detailed the months of comments Trump had made questioning the integrity of the election, making the argument that the only way he could lose is if the election were stolen. He made such statements before, as well as after, the election. These statements were the stock for the insurrectionist soup, the groundwork, setting the table for the main course. When he lost the election, his devoted followers were primed to do the patriotic thing and defend democracy from those who were allegedly trying to steal it.

Let us return to election night. In the early hours of the morning, he addressed a group of supporters in the White House. He listed some states he had indeed won, such as Florida and Texas. He prematurely claimed he had won Georgia and began casting aspersions on the decision by Fox News to call Arizona for Biden. He correctly said he was winning Pennsylvania, but failed to note that very few of the mail-in ballots had been counted. "We were getting ready to win this election," Trump said. "Frankly, we did win this election."

It was hard to know that night if he believed what he was saying. It is often difficult to know if Trump and his followers really believe the demonstrably false things that come from their mouths. One of the most dangerous qualities about a narcissist is their penchant for believing their own propaganda, which creates a variety of sincerity. As the ballots were counted and it became clear Trump had lost, his speech became more fantastical. After the votes in the states were certified and the electoral votes counted in the state capitals, he supported a bizarre legal challenge from the attorney general in Texas, which the U.S. Supreme Court dismissed without even granting it a hearing. By the fateful day in January when Congress was to ratify the votes from the states, his legal challenges had been tossed out in almost 60 cases. His last-minute effort to get the secretary of state in Georgia to "find" 11,780 votes, in a Jan. 2 phone call, showed how desperate and disconnected from reality Trump had become.

Intent is a key element in a crime but it is often difficult to nail it down when the accused is not really tethered to reality. Further, to sustain a charge of inciting an insurrection, you would think the former president's intent would need to be made crystal clear, that he wanted those people in that crowd to storm the capitol building and do … what? It is not at all clear how he thought this would play out. His defense lawyers and political allies argued that his repeated calls to fight were metaphoric, that his speech was no more an incitement than the speeches of many Democrats who sometimes use combative language.

It is a nice question: How did Trump expect the mob was going to "stop the steal"? Republicans say that the difficulty in answering that question required an acquittal because the connection between his fiery language and the actual misdeeds of the mob was necessarily too diffuse. Weeks later, we still are not sure what he or they intended. How could that be deemed a high crime?

Trump's defense, then, was that his language about fighting and stopping the steal was metaphoric. But what was the metaphor? Did he expect the mob to enter into the Senate or House chamber and put forward some amazingly persuasive argument that would convince enough of the legislators to toss out the certified Electoral College votes of the several states? Was he hoping they would make an appeal to the United Nations? Was he expecting divine intervention?

The 43 Republican senators, by voting to acquit, have set a terrible precedent. Democracies are at their most vulnerable during the transfer of power from one party to another. Refusing to surrender power when you have lost an election is the most dangerous threat. And, now, future presidents who wish to cling to power know they can go all lengths to overturn the election and not be punished, so long as they can hold the allegiance of a third of the Senate.

We may not know the "how" that motivated Trump when he called his surly and angry followers to march on the Capitol, but we know the "what." He wanted to overturn the results of a constitutionally valid election. He had every right to make his case in court, but once he had lost there, his words could have only one objective, the subversion of our democratic government. If the Republicans did not see the need for the prophylactic remedy of barring such a man from future office or sinecure, they are blind, or more likely, suffer from a different affliction. They put one in mind of another verse from Lowell's famous poem:

Then it is the brave man chooses, while the coward stands aside.

All but seven Republican senators stood aside.