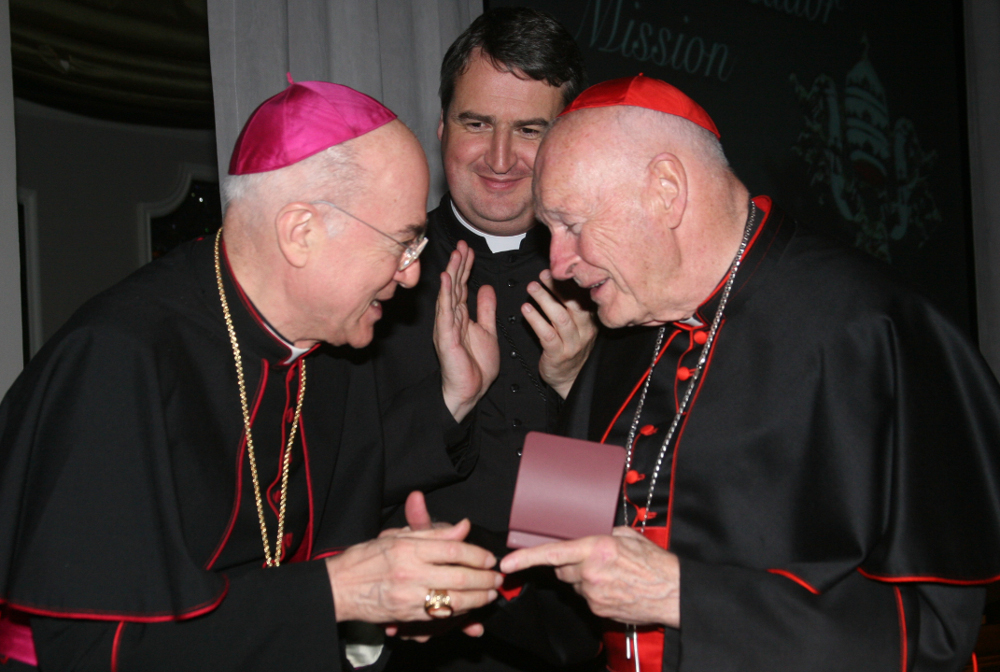 Archbishop Carlo Maria Vigano, then nuncio to the United States, congratulates then-Cardinal Theodore McCarrick of Washington at a gala dinner sponsored by the Pontifical Missions Societies in New York in May 2012. (CNS/PMS/Michael Rogel)

Archbishop Carlo Maria Viganò, the former nuncio to the United States, is a prickly sort of man. He offered his 11-page dossier and pretended it was an account regarding former Cardinal Theodore McCarrick, when it was really just chock-full of score settling, conspiracy theories, bigotry and misinformation.

Now, upset with a news account about what Pope Francis thought of the meeting with Kim Davis, the Kentucky county clerk who went to jail after she refused to issue marriage licenses to same-sex couples as required by law, Viganò has published another statement, this time promising to explain what "really happened" regarding the meeting between the pope and Davis.

What Viganò actually demonstrates is that he is incapable of telling the truth, the whole truth and nothing but the truth, and that his anti-gay bigotry has so blinded him, he still mischaracterizes the issues surrounding Davis.

At the end of the dinner, at the Nunciature in Washington, on the evening of September 23, 2015, I told the Pope that I needed him to grant me a half hour, because I wished to bring to his attention, and possible approval, a delicate and easily achievable initiative; that is, to meet personally and in a completely confidential way, out of the media spotlight, with Kim Davis, a clerk in Rowan County, Kentucky, the first American citizen condemned and imprisoned for one week for having exercised her right to conscientious objection.

The proper name for this kind of thing is "sandbag." After many people spent months deciding every moment, every venue, every text, every encounter of the papal trip, at the end of a dinner Viganò springs this idea on the pope: Let's have you meet with Davis.

He then goes on to say that he explained to the pope who this woman was. More on that later. And, the pope asked him to clear it with the Vatican Secretary of State, Cardinal Pietro Parolin, because the pope intuited there might be a political difficulty. Viganò says Parolin was asleep by the time he got to the hotel where he was staying and so, instead, he briefed the cardinal's two principal assistants, Archbishops Angelo Becciu and Paul Gallagher. They signed off. The meeting happened. Viganò goes on to rant about how all hell broke loose when the meeting became publicized.

Notice anything strange about the account? Viganò speaks about this proposed meeting with three non-Americans: the Argentine pope, the Sardinian sostituto and the British foreign minister. Wouldn't it have been wise to check in with an American prelate? The U.S. bishops at the time were embroiled in a legal battle with the Obama administration at the time of the papal visit over the contraception insurance mandate. The Holy Father made a visit with the Little Sisters of the Poor, the lead plaintiffs in the case, during his trip as a mark of solidarity in the fight for religious liberty. 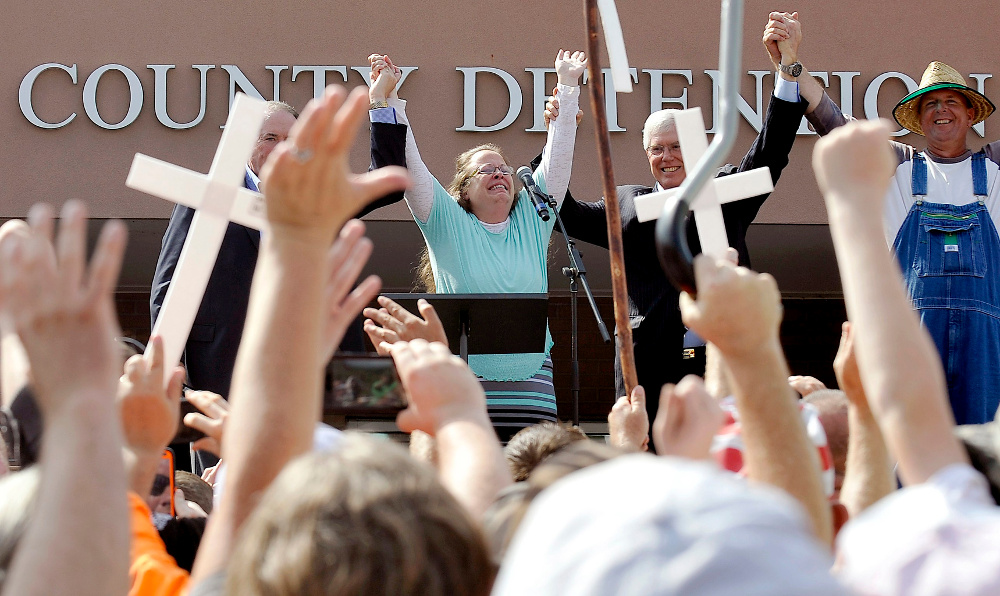 Viganò did not mention it in this latest dossier of his, but the fact is that he had consulted with at least one U.S. prelate before the meeting with Davis took place, and he was urged not to do it. I did not know about the meeting until the story broke a few days after the pope had left the U.S. At that time, I spoke with Cardinal Donald Wuerl who, as Archbishop of Washington, had been intimately involved in the planning of every detail of the pope's time in the capital city. That conversation was on background but I have asked the cardinal's permission to put it on the record now given Viganò's latest statement, and he agreed to do so.

Back in 2015, when this all transpired, Wuerl told me then that Viganò had asked him about the advisability of a meeting between the pope and Davis and Wuerl had advised against it. Viganò also told Wuerl that he had asked Archbishop Joseph Kurtz, then-president of the U.S. bishops' conference, and that he also had advised against it. NCR has asked Kurtz to confirm this but has not received a response.

It should not surprise that Wuerl — and almost any American bishop — would advise against having the pope meet Davis. Viganò may think she was a "prisoner of conscience" but that misstates her case. As I wrote at the time:

If the pope wanted to show support for the right of conscientious objection, it would have been better to have him meet with a conscientious objector. Davis lost her right to consider herself a conscientious objector when she forbade other people from issuing the marriage licenses she did not wish to issue herself. Davis was not jailed for practicing her religion. She was jailed for forcing others to practice her religion. She is not even a cake baker or florist in a private business, people whose claims I find suspect but which the U.S. bishops support. She is a public official with a sworn duty. If she cannot carry out that duty, she should seek a work-around or an accommodation, which is what she ended up accepting, or she could have done what a real person of conscience would do: quit.

The U.S. bishops did not back Davis in court because they were fighting to protect religious liberty and she wasn't. The Becket Fund, which exists to defend a pretty aggressive and expansive notion of religious liberty, also did not touch Davis' case. They did recently support a county clerk in North Carolina who asked for a workaround and was denied it. Davis refused a workaround when it was offered.

Viganò writes, "What is certain is that the Pope knew very well who Davis was," but by his own account, the pope knew what Viganò himself explained about Davis. And what he explained was wrong. She was not "the first American citizen condemned and imprisoned for conscientious objection." And, what a coincidence that she was in Washington and Viganò knew where and how to track her down!

It should be obvious to discern why Viganò championed Davis then as now. His 11-page dossier was filled with anti-gay slurs and complaints about a "lavender mafia" that tried to do him in. I suspect the reason Pope Benedict XVI exiled him from Rome and Francis sacked him early on is because they saw what we can now all see: This is an ambitious, gossipy, mean-spirited little man.

This latest self-revealing dossier comes at the same time that Viganò's magnum opus of last week is falling apart. Edward Pentin at the National Catholic Register, who played a key role in disseminating Viganò's original dossier, now appears to be realizing that perhaps he has been taken for a ride. Now Viganò admits his "memory isn't helping me know" as to whether his instructions were written or not. This from a man so precise? Now he says he doesn't know if the supposed strictures against McCarrick were communicated to Wuerl or not. Another source isn't sure if there was a decree or just a private suggestion that McCarrick keep a low profile.

For this, the pope should resign? The pope should dignify the charges of this man who seems incapable of telling the truth, get down in the mud with this score-settler, and why? Because Fr. Gerald Murray and some conservative Catholic women think Viganò is credible? This man whom we learned during Vatileaks lied about needing to stay in Rome to care for his brother, except that his brother was not in Rome but in Chicago, was not ill but healthy, and had not spoken with his archbishop brother for years. This man whom his sister now calls a "farabutto" or "scoundrel."

I have a better idea. Let's admit it was a huge mistake for Benedict to get rid of the headache Viganò was at the Vatican by making him America's headache, and let's thank Francis — the guy who actually sacked McCarrick — for preserving the dignity of the papacy by refusing to get into the Viganò gutter. And, let's recognize, too, that Viganò is part of a concerted campaign to attack Francis and everything he says must be seen in that distorting light.