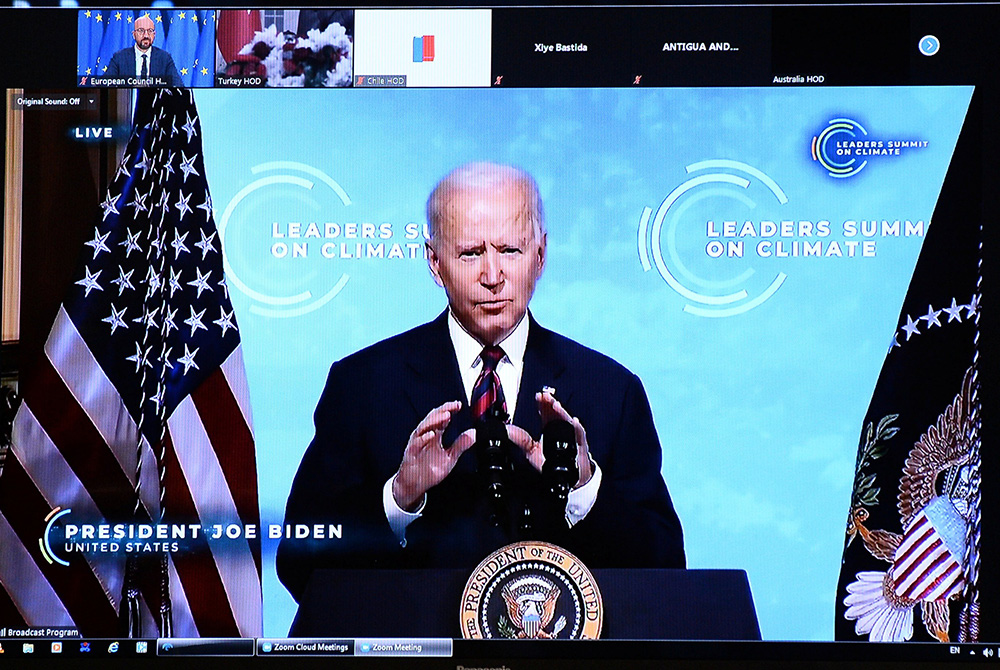 President Biden's Earth Day summit got high marks for media savvy, including an appearance by Pope Francis. Substantively, the policy changes Biden announced struck exactly the right balance in trying to pivot the U.S. toward reductions in fossil fuel emissions and converting the economy to sustainable energy sources. Just so, it angered politicians and especially activists on both the right and the left, usually a telltale sign that the correct path has been charted. There is no escaping the need to calculate the politics of climate change as well as the depth of the ozone layer in figuring out how to proceed.

The most significant change Biden announced was a virtual doubling of the emissions' reduction goal to 50-52% by 2030. The White House outlined some key investments that would make such a reduction possible, emphasizing the potential for job creation:

As critics complain about the price tag of such investments, Biden will be able to ask, "So, you are opposed to creating new jobs here in [insert name of town where he is speaking]?" That is more politically persuasive than arguing about the need to achieve difficult-to-understand climate goals far in the future. Biden's list consists of all blue-collar jobs, a not-too-subtle rebuttal to the GOP claim that they are the true representatives of the working class.

Biden also unveiled plans for a first-ever international climate finance plan. The administration will double climate financing aid to developing countries by 2024, work to mobilize private financing, and terminate current financing for fossil fuel industries. Countries in the developing world have every right to continue to grow their economies but the health of the planet requires that we help them avoid the reliance on fossil fuels that characterized 19th and 20th century development in the West. The U.S. still has the highest per capita emissions by a wide margin, although it is interesting that Europe's per person carbon footprint is now less than China's. Helping poor countries develop clean technology will save the world — and the world's poor — from future climate nightmares.

McCarthy's complaint is the most pernicious because it is potentially the most effective. Biden's early misstep in cancelling the Keystone Pipeline before he had found alternate employment for the workers there makes it more likely this GOP charge will stick. Several states are suing Biden over his decision on the pipeline and even if they lose, they will help create the narrative: Democratic climate policy kills jobs.

Some activists on the left complain that Biden's new targets do not go far enough. "If you're asking whether the U.S. target is fair and ambitious, the right yardstick isn't what will pass muster with the Senate," Sivan Kartha, a senior scientist at the Stockholm Environment Institute, told The New York Times. "The question is what should the United States do given its capacity to act and its historical responsibility for causing the problem?"

Kartha has a doctorate in theoretical physics from Cornell, so he is no dummy. Yet, to fail to recognize the need to forge a political consensus evidences the kind of stupidity at which activists excel. It invites the kind of backlash the U.S. has just lived through for four years. Another round of Trumpism is not going to help save the planet.

I encountered that unique kind of activist myopia at a meeting of Massachusetts interfaith religious leaders and climate scientists that I helped organize in my capacity as a senior fellow at the Greenberg Center at Trinity College. Towards the end of the two-day meeting, which included some religious leaders who had never before been involved in the issue, and as the group had achieved consensus on a couple of short-term goals and generally extending goodwill towards each other, one young activist stood up and said something like, "If climate change is not your No. 1 issue, you are not morally serious."

There were, in fact, many morally serious people who had dedicated their lives to other causes from protecting the unborn to building social capital in inner city neighborhoods to fighting racial injustice to working to limit the threat of nuclear proliferation.

The young man continued, noting that Massachusetts was a state of "firsts" — one of the first colonies to declare independence, one of the first to abolish slavery and the first to enact gay marriage. Needless to say, some of the religious leaders present had been on the other side of the gay marriage debate. The young man, so intent on urging everyone to action on climate change, had succeeded only in making the effort more difficult.

Biden has set a true course and he should not let his administration be pulled one way or the other, either by Republican intransigence or by the environmental activists on the left who dismiss the importance of politics. If compromises are needed to get it through Congress, that is what politics is all about. The task ahead is not to second-guess his own policy. It is to make sure these new ambitious targets are met, which is no easy task. And no small achievement.