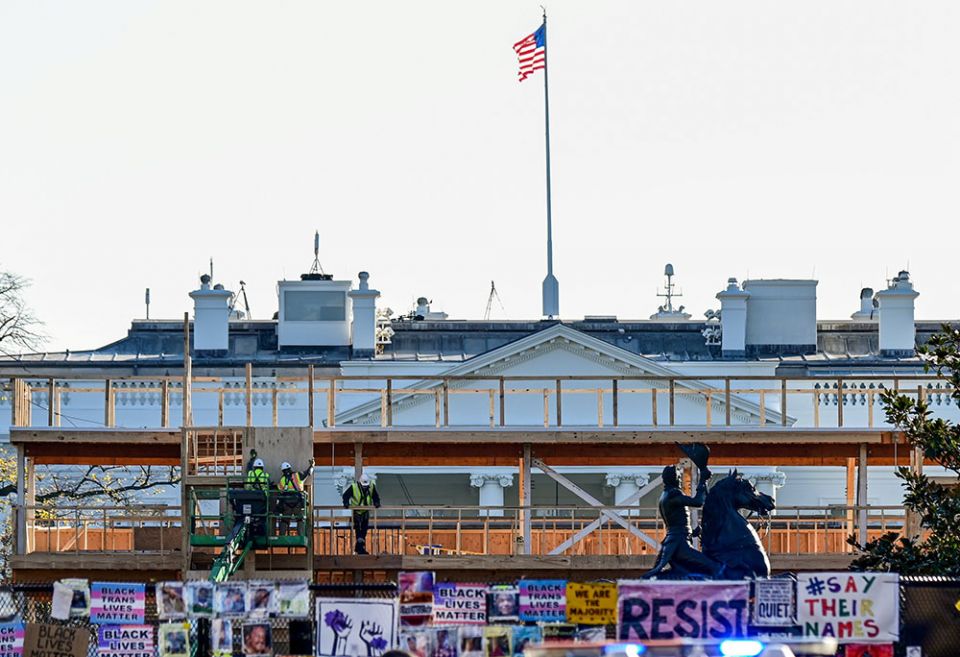 Workers construct a viewing stand in front of the White House Nov. 28, 2020, ahead of the presidential inauguration ceremonies Jan. 20, 2021, in Washington. (CNS/Reuters/Erin Scott)

What can we expect in the world of politics this new year?

I went back and read my predictions at the beginning of 2020. Of course, I did not predict a pandemic would afflict the planet and alter all political calculations! Who knows what unforeseen events may happen in 2021? Let's hope my prediction of a brief respite from politics from the Tokyo Olympics finally happens this year!

The year opens with President Donald Trump still dominating the headlines. His story, however, is increasingly less about politics, which is at some level always about the acquisition and deployment of power, than it is about psychology. He can, and no doubt will, continue to rant and rave, but without the power of the presidency behind him, his tweets and other verbal explosions lack the threatening quality they have enjoyed the past four years. 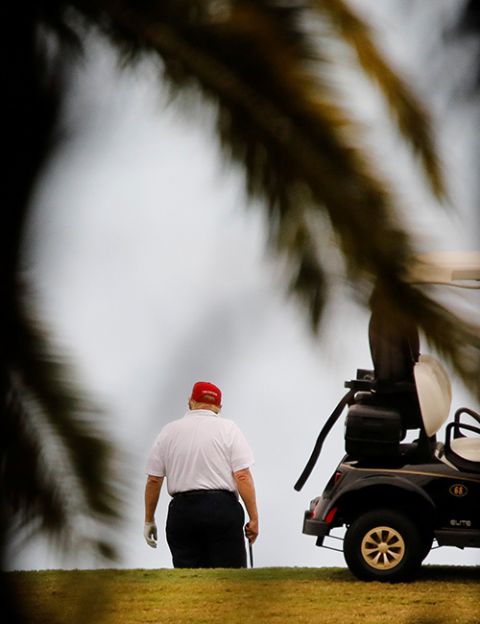 No one knows if he will show up for the inauguration of his successor. I tend to doubt it. But who cares? At noon on the 20th of this month, the nuclear football will be seen next to President Joe Biden.

The Trump saga will continue through most of the year as a sideshow, a fascinating sideshow to be sure, but a sideshow nonetheless. His own decisions will be, to some degree, shaped by the decisions of Attorney General Letitia James of the great state of New York. Even if no one looks into his abuses of power as president, there is much to investigate in his financial dealings before he became president. The feds got Al Capone for tax evasion after all.

I would not be surprised if Trump fled to a country with nice golf courses and no extradition treaty. Avoiding creditors also will incline him to seek the protection of a dictator somewhere. If I had to bet, I would bet on Saudi Arabia. Russia is too cold.

In any event, after Jan. 20, the news will become dominated by decisions the new president makes, new crises he must face, new votes in Congress. The Biden presidency will be largely shaped right out of the box by how he confronts the COVID-19 pandemic and the economic devastation it has wrought.

Needless to say, Biden's policy options will also be shaped to a great extent by the results of tomorrow's two Senate elections in Georgia. Whether the Democrats capture control of the Senate or not, Biden's first task is to address the economic collapse with strong, broad-based proposals to help people who are struggling mightily.

According to Bloomberg, 110,000 restaurants had closed for good last year, a stunning number of small businesses known for their role in providing first jobs, part-time jobs, and jobs for undocumented workers.

A survey by the Census Bureau indicates that 35.3% of all Americans fear losing their homes or rental apartments in the coming months. That is more than 100 million people who fear that homelessness is in their immediate future! 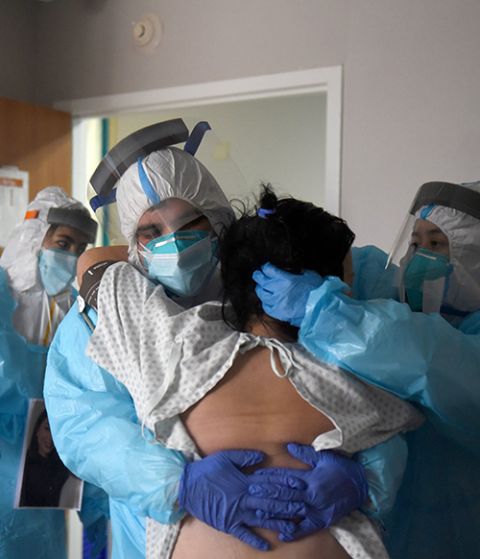 One-fifth of all hospitals in the country reported that their intensive care beds were 95% full in the week ending Christmas Eve. 78% of ICU beds were full nationwide. This is before the onset of what is expected to be a post-Christmas surge in the number of new cases.

Anyone who approaches Biden with proposals for any non-pandemic related issue should be sent home to nurse their bad case of myopia. Yet the Human Rights Campaign produced 85 policy proposals for LGBTQ equality within days of the election. Secretary of Health and Human Services nominee Xavier Becerra has a track record that holds the potential for a variety of culture war battles that would distract from the central task at hand.

The first non-COVID-19 issue to percolate to the top of the heap is student loan forgiveness. Ruby Walsh, at Moyers on Democracy, reports on how and why the issue has moved front and center. Certainly, it appeals to many of the well-educated, well-connected young people who staff all administrations. Fortunately, Biden said he is "unlikely" to use his executive authority to make any of that happen. I shall have more on this issue in the weeks ahead.

In a recent article at Foreign Policy, Carlo Invernizzi Accetti argued that polarization insufficiently describes the current political situation because "in addition to the bitter conflict between the two parties, there is also an increasingly salient conflict within each. And this largely overlooked internal conflict is set to play a decisive role in determining future political outcomes." I do not agree with him that the U.S. may be moving toward a multiparty democracy as found in Europe, but he is right to note that Biden's decisions will be crafted in a complex political environment.

Accetti predicts "the United States is likely to be governed by a form of residual centrism defined primarily by opposition to the far-left and the far-right — perpetually kicking the can down the road and maintaining a veneer of stability while social dissatisfaction continues to brew beneath the surface." He may be right, but it is a recipe for disaster.

The people Biden must most clearly define his administration against are not the far-right Trumpian nationalists but the center-right Wall Street Republicans. Critically, many leading Democratic politicians cannot conceive of a politics that is not dependent on Wall Street either. If Biden governs with a view toward placating the Wall Street caucus, his presidency is doomed.

Instead of governing from the center, with pared-back, fiscally "prudent" policies that will not meet the demands of the moment even if they do pass Congress, Biden needs to go bold on economic recovery. Instead of worrying about a "center" that is beholden to Wall Street and Reaganomics, he should reach out to the ends of the horseshoe, the working-class populists whom Trump promised to help but didn't and whom most Democrats have learned to ignore.

He needs to start with a big infrastructure bill, closing the digital gap with high-speed internet in rural areas and increased access and education in the inner city. Introducing big sustainable energy projects — solar panels at all schools, government investment in electric car production, purchasing the rail lines and updating them so that the U.S. can have high-speed rail like every other major industrial country — with high-paying union labor will both reignite the economy and help address the devastation wrought by the past four years of pretending climate change is unreal. Retrofitting the nation's subways and sewers isn't glamorous, but it is needed and it requires a lot of new jobs.

How to pay for it? Biden should support the wealth tax Sen. Elizabeth Warren proposed. At a time when Amazon is making record amounts of money, and paying taxes last year for the first time since 2016, perhaps it is time to consider a corporate minimum tax. Let the Republicans be the defenders of big business. There are plenty of ways to raise revenue without taxing the working and middle classes.

It is impossible to predict what Biden could get through Congress, but populist economic ideas are wildly popular. The people of Florida on election day delivered a significant, more than 3-point win to Trump but they also voted to raise the minimum wage in the state to $15 an hour, and they did so by a margin of 61% to 39%. Whichever party successfully defines itself as the champion of the working and middle class will become the majority party. This is Biden's to lose. 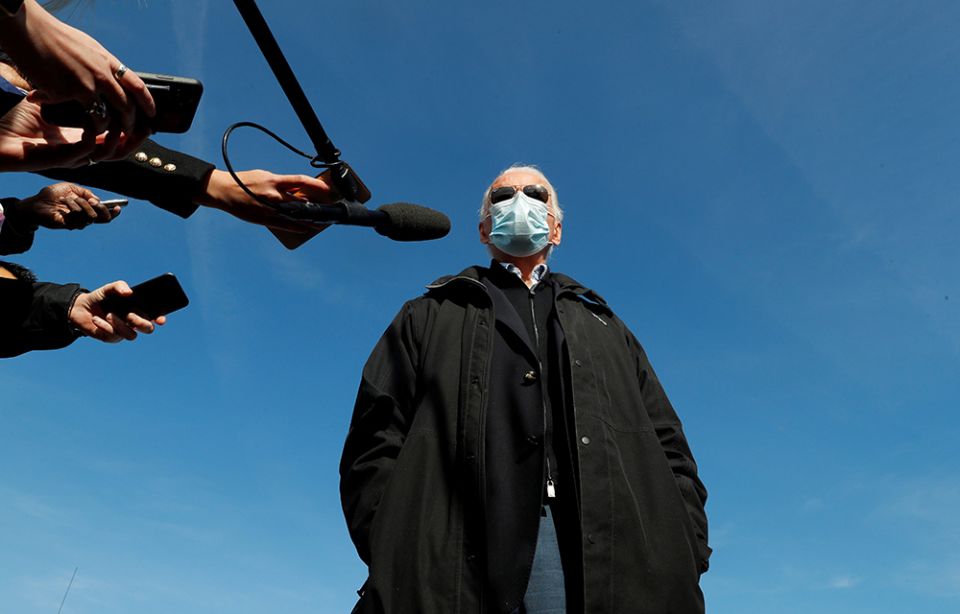 At the end of the year, look for Trump and/or his acolytes to try to turn the story back to themselves as they recall which Republican members of Congress were insufficiently engaged in the effort to overturn the election results — among other grudges.

I do not expect Trump or his children or his most loyal staffers will forget Republican Congressman Adam Kinzinger accusing them of perpetrating a "grifting scam" in their efforts to challenge the election results. They will be looking for a primary challenger to the Illinois congressman. There will be others. Does anyone doubt that Trump remains the most powerful force within the GOP?

Biden can make his party into a governing coalition (and offset the usual midterm losses in 2022) by delivering on what Trump promised, to bring new opportunities to the people he grew up with, the workers of Scranton, Pennsylvania, and other once great industrial cities. He can consolidate his narrow victories in Arizona and Georgia, and continue to close the gap in Texas, by helping to fund infrastructure projects that eliminate the gridlock commuters face in fast-growing cities like Phoenix, Atlanta and Houston.

If, by year's end, Biden has stood up to Wall Street and succeeded in passing and implementing a major infrastructure program, he can finally slay the beast that is neoliberal economics with all of its mythology. What is more, he will have returned liberalism in American politics away from its most recent, faculty seminar iteration, back to its historic calling. As Arthur Schlesinger Jr. wrote back in 1944, in The Age of Jackson:

Returning liberalism to this historic role of identifying and meeting those needs the business interest has ignored, needs that have been exposed so clearly by the pandemic, and restraining the influence of the moneyed interest, this should be the core fact of the political life of the nation in 2021. It is up to Joe Biden to make it so, starting on Jan. 20.