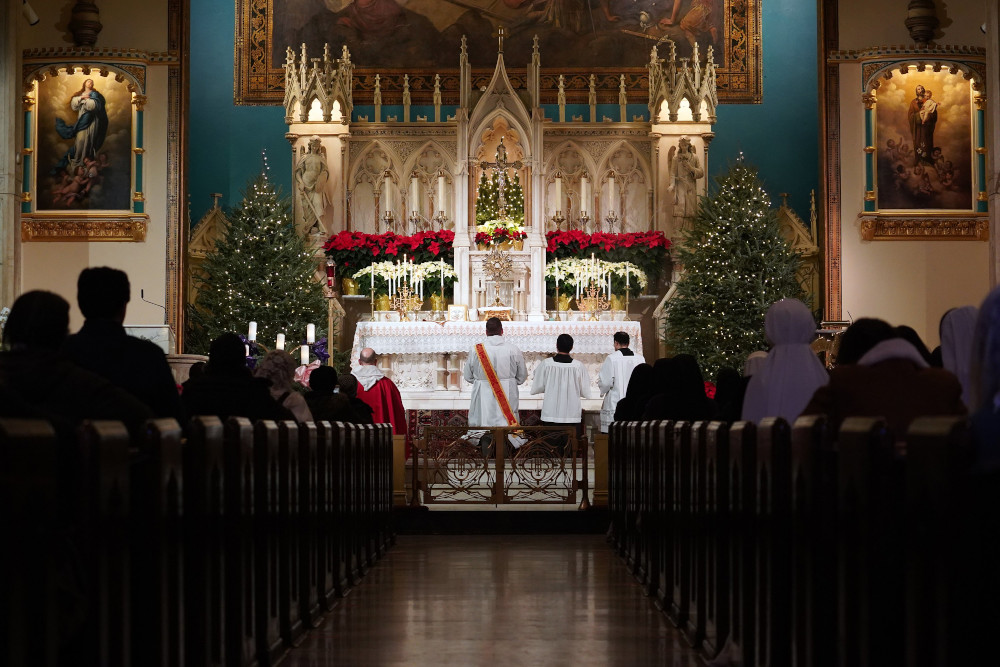 As I turned the corner from Broadway to 37th Street, I found a diverse hoard of people congregating toward the middle of the block. It was approaching 10:30 a.m., and the High Mass at midtown Manhattan's Holy Innocents was about to begin.

The attendees, who consisted of a wide range of ages and ethnic backgrounds, made their way up the stairs, most of them carrying raggedy 1962 missals in hand. Many of the women were wearing floor-length skirts and chapel veils, while others wore form-fitting floral print dresses, flashy heels, one of them donning designer sunglasses and dangling a worn Louis Vuitton bag from her arm. I noticed a number of the younger men were wearing three-piece suits, one wearing a backpack with images from an anime show I couldn't identify, and several older men wearing flamboyant button-down shirts, bracelets and numerous large rings.

I've attended Church of the Holy Innocents, New York City's main hub for Tridentine Latin Mass enthusiasts, on and off since my undergrad days. Many, including Pope Francis himself, have expressed concerns that parishes that celebrate the Latin Mass tend to attract reactionaries who are opposed to progress and give rise to insular communities.

As much as this is often the case, and I applaud Francis for taking this step, my experience has shown me that there are other, more nuanced reasons people are drawn to the Tridentine Latin Mass. Yes, many are drawn to it for ideological reasons. But the Latin Mass is also a haven for those who feel misunderstood or outcasted for their unconventional personalities and aesthetic sensibilities.

"There's something to the idea that personality typing impacts the way one chooses to worship," says Catholic psychologist Ellie Rose. She points to the correlation between the Myers-Briggs Type Indicator and the four temperaments [choleric, melancholic, sanguine, phlegmatic], which "get a fair bit of attention in the Catholic world."

"When considering the Traditional Latin Mass," she continues, "I wouldn't be at all surprised to find more introverts there for one thing, as the disposition is geared towards interiority and silent prayer. … Whereas the ordinary form of the Mass seems to emphasize the communal aspect of worship much more. I'd be willing to bet that there are more 'N' types (Intuitives vs. the 'S' type of Sensor) [at Latin Mass] simply because those with a dominant intuitive function are drawn to the abstract. They tend to be more comfortable with mystery and can tolerate the ineffable to a greater degree than Sensors who tend to excel at very practical here and now thinking."

Among the many neurodivergent people I know who are drawn to the Latin Mass are people who are on the autism spectrum. "Autistics tend to like regularity and order; they also tend to easily get sensory overload," said Legionaries of Christ Fr. Matthew Schneider, who writes frequently about his own experience on the spectrum.

"As such, a Mass that is predictable in that it follows the rubrics closely and one without loud music is generally preferred," he said. "I personally find this often in ordinary form Mass celebrated strictly according to the rubrics without loud music or other distractions. But depending on the person and the parishes around them, some autistic people better find this in extraordinary form."

"When considering the Traditional Latin Mass, I wouldn't be at all surprised to find more introverts there for one thing, as the disposition is geared towards interiority and silent prayer."

Francesca Dante, a Catholic who has Asperger syndrome, says she's drawn to the Latin Mass due to the "routine, ritual, limited variation, little requirement to participate outwardly and possibly because it may be less crowded."

"There is so much more richness to the words [in Latin]. The parts that hit me linguistically, in a way that no translation ever has, including the juxtaposition of the domine non sum dignus and the dignum et justum est — just wow! The difference between the worthy sacrifice and the unworthiness of humanity to receive salvation through it pivots on that one word in its two different uses."

"The TLM is unlike anything else on earth: no pop-inspired noise to interrupt my thoughts, incense, ceremony and a language that reminds me in every single word that is spoken that I am not in any ordinary place, but drawing into the presence of Christ and his sacrifice." 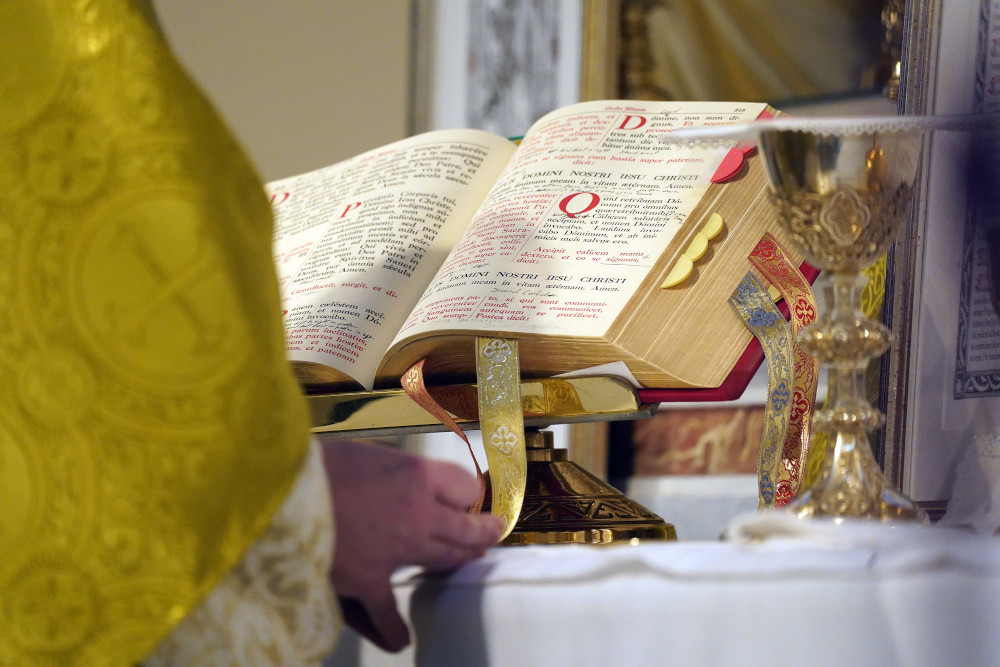 A sacramentary is seen on the altar during a traditional Latin Mass July 18, 2021, at St. Josaphat Church in the Queens borough of New York City. (CNS/Gregory A. Shemitz)

Bianca Marie-Erszebet Martin, a mother who also identifies herself on the autism spectrum, says that in her general experience, the ordinary form "is designed to need specific participation from the people … and the music is often big and loud in ways that are like brick on sandpaper for me … which is just too much for my brain.

"At the Latin Mass," she continued, "I can choose my level of 'active participation' based on my tolerance level and how needy my toddler is." She appreciates that there aren't multiple elements vying for her attention.

The aesthetic elements of the Latin-rite Mass, which tend to be less present in most ordinary form masses, are another draw for many, especially those who find themselves caught between cultural and generational divides.

Dasha Nekrasova and Anna Khachiyan, hosts of the popular Red Scare podcast, attended a Latin Mass for the first time in New York City with Mecha, who is a leader in the "leftcath" movement (formerly the Tradinista! movement), which advocates for Catholic socialism.* In their subsequent podcast discussion, Dasha, a Belarusian-born actress, expressed that the Latin Mass was starkly different from the "Americanized boomer capitalist Catholicism" she encountered when she and her family first immigrated to the U.S.

They went on to discuss how a growing number of millennials are disillusioned with the perceived lack of aesthetic sensibility of those who came before them. Mecha claimed that in America in the 1970s, the standards of liturgical music and content of homilies started to change, which to him came off as "pandering" and "really affected."

"At Latin Mass," he continued, "there's a sense that what's going on inside the church is different from what's going on outside … something important is going on that's set apart and dedicated to God."

The aesthetic elements of the Latin-rite Mass, which tend to be less present in most ordinary form masses, are another draw for many, especially those who find themselves caught between cultural and generational divides.

Much of the generational, cultural and aesthetic sensibilities implicated in the differences between the Latin-rite Mass and ordinary form echo the concerns expressed by the Decadent writers toward the end of the 19th century. Catholics like Joris-Karl Huysmans, Charles Baudelaire and Oscar Wilde were drawn to the beauty and pageantry of Catholicism as the cultures in the United Kingdom and France were rapidly secularizing.

Jean Des Esseintes, the protagonist of Huysmans' famous A Rebours, is "plagued by the ever-present 'sickness of the century' that afflicted so many of his contemporaries: disillusionment, rootlessness, crippling feelings of banality and a deep-seated sense that they had been born into 'a world which seemed not to need them,' " says psychiatrist Mattias Strand.

The Decadent writers' "obsession with medieval Catholic symbolism" was dismissed as "neurotic" or "hysterical" in their increasingly secular context. But within a Catholic context, writes Ellis Hanson in his book Decadence and Catholicism, Huysmans found that these sensibilities could be celebrated as a recognition of the inherent "correspondences" between mundane objects and higher "ideals."

Wilde references Au Rebours in The Picture of Dorian Gray, calling it "the yellow book" that sparked Dorian's fascination with Catholic ritual. Wilde's own fascination with Catholicism during his Oxford days and eventual deathbed conversion are frequently juxtaposed with his campy public persona and homosexuality. But I would dare to assert that both of these countercultural sensibilities derive from a similar "queer" impulse.

There are surely many ministries in place today for same-sex attracted Catholics like Courage International and Eden Invitation, which focus on growth in chastity, and New Ways Ministry and DignityUSA, which focus on revising church doctrine on sexuality. But many Catholics who experience their queerness more as a spiritual or aesthetic sensibility don't find their experiences implicated in the construal of gayness as either an identity category or a moral condition. This reflects the concerns of the many self-proclaimed "liturgical queers" or "liturgiqueens" — one of whom I spoke to, Albertus Jung, told me he "only attends the TLM." 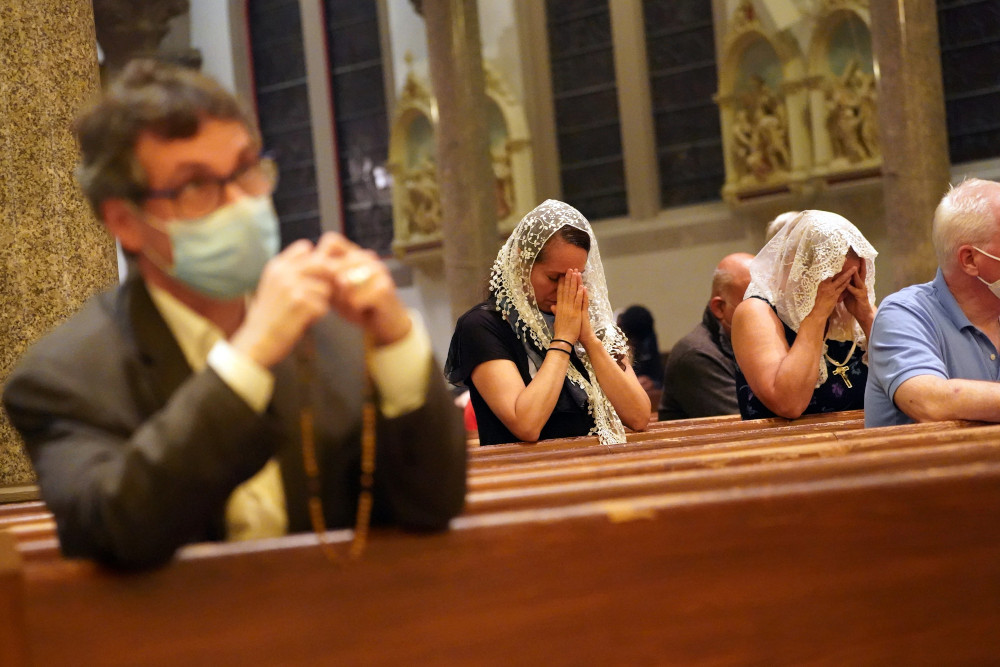 People pray during a traditional Latin Mass Aug. 11, 2020, at Our Holy Redeemer Church in Freeport, New York. (CNS/Gregory A. Shemitz)

Grant Cook, co-host of the Contra Gentiles podcast, says that "as a gay person who doesn't necessarily feel like I fit into a strict binary between totally masculine or completely feminine, I feel like Latin Mass gives me the opportunity to forego all of the social politics involved with more contemporary services. The fact that Latin Mass is structured, so reverently and pointed, so wholly towards God, means that I can remove the things I struggle with in my sexuality and gender from the equation for just a minute and experience God in a way that I haven't elsewhere. It's not about me."

In addition to attracting queer people, the Latin Mass can serve as a safe haven for those whose characteristics or sensibilities are more generally out of the ordinary. Sarah Sparks, a gay Catholic who has written about how the Latin Mass helps her as someone who is deaf, told me that she is "accustomed to people being perplexed by me, partly because of my sexual orientation considered alongside other aspects of my life. One of the gifts that has come from my sexual orientation and other aspects of difference in my life is that I don't worry much about what other people think of me."

Parishes that celebrate the Latin Mass can indeed attract people with reactionary ideologies. The restrictions Francis put into place in the recent motu propio will hopefully curb this tendency.

But I would caution detractors of the Latin Mass to take a step back and look at the other reasons people are drawn to this particular liturgy. Those who feel outcasted or alienated from parishes that only celebrate the ordinary form, including myself, deserve to have their sensibilities and experiences taken into account. As someone with neurodivergent tendencies whose experience overlaps with those quoted in this article, I can only hope that the recurring back and forth in the liturgical wars will be a provocation to all parishes to work on creating more inclusive liturgical and social environments.

*This sentence has been updated to include the new name of the movement.