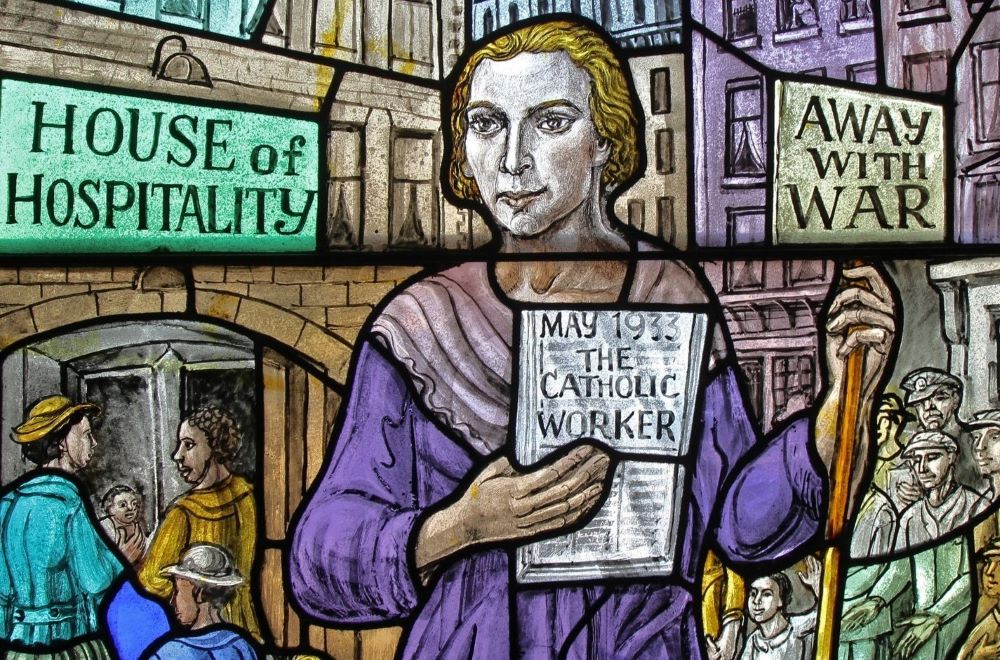 Dorothy Day is depicted in a stained-glass window at Our Lady of Lourdes Church in the Staten Island borough of New York. Day's cause for canonization is advancing from the Archdiocese of New York to the Vatican's Congregation for the Causes of Saints on Dec. 8. (CNS/Gregory A. Shemitz)

"That's the way people try to dismiss you," Dorothy Day told a reporter for The Chicago Tribune in 1977. "If you're a saint, then you must be impractical and utopian, and nobody has to pay any attention to you. That kind of talk makes me sick." Like some other of Day's sharpest comments, this quote has softened with its retelling, coming to rest as "Don't call me a saint. I don't want to be dismissed that easily."

On Dec. 8, Day's cause for canonization is advancing from the Archdiocese of New York to the Vatican's Congregation for the Causes of Saints. The event, which signals the conclusion of a national process investigating Day's holiness, will be marked with a Mass celebrated at St. Patrick's Cathedral.

Of course, to recognize that someone is a saint is not necessarily to dismiss them. The fruits of Day's own lifelong devotion to the saints proves this. Day's dread of being dismissed while named a saint, however, is well founded and should not itself be easily dismissed as simple humility.

When Cardinal John O'Connor, then archbishop of New York, opened Day's cause in 1997, he asked: "Why does the Church canonize saints? In part so that their person, their works and their lives will become that much better known." While it is true that through the cause for her canonization more people know Dorothy Day's name, it has also caused misunderstanding and misinformation from the start.

While many of the people I love and trust in the Catholic Worker movement are supporting her cause and have been diligent in keeping the process real, others have not been so careful. Some of the most zealous champions of her cause have, deliberately or not, occasioned the very dismissal that Day feared. It seems as if some who would have argued with and even condemned her when Day was alive, now would neutralize her with praise.

One public dismissal of Day occurred on Nov. 7, when Archbishop Josée Gomez of Los Angeles addressed a conference in Spain. Gomez appropriated Day, citing her against secular social justice movements such as Black Lives Matter that he says are heresies to be opposed, branding them "dangerous substitutes for true religion," condemning them as fruits of a "Marxist cultural vision."

The archbishop's confusion might come from O'Connor. "Dorothy Day often seemed friendly to political groups hostile to the Church, for example, communists, socialists, and anarchists," O'Connor said in 2000, adding that to understand Day, "it is necessary to divide her political stances in two spheres: pre and post-conversion."

Gomez might also have caught an interview in August with Larry Chapp, who owns a Catholic Worker farm in Pennsylvania, on the podcast "Catholic Answers Focus": "So she had those associations, but once she became Catholic, she completely disavowed her relationships that she had with Marxists and she opposed socialism."

The distinction between the two spheres in Day's life is not as clear-cut as O'Connor and Chapp suggested. I think that Day would be particularly hurt to have a member of the Catholic Worker family repeat the story that she had disavowed relationships with people whom she loved her whole life.

In 1964, long after her conversion, in a tribute for her friend Elizabeth Gurley Flynn, secretary of the Communist Party USA who had died in Moscow, Day called Flynn "my sister in this deep sense of the word." Some years later, Day called the Black activist Angela Davis her sister as well, and wrote in her column in The Catholic Worker:

Underneath a picture of Angela Davis which appeared in the Daily World a few weeks ago, there was a caption, 'All generations shall call her blessed.' To continue to quote scripture, she has been 'counted worthy to suffer dishonor' for justice sake. Angela Davis is a Communist, in this case and it is a name for vilification nowadays, though the early Christians, working for the common good became communists in a very literal sense. 'Property, the more common it becomes, the more holy it becomes,' as St. Gertrude said in the middle ages.

Far from endorsing Gomez's disdain for secular social activists, in her 1938 autobiography From Union Square to Rome, Day quoted novelist François Mauriac's assurance, "What glorious hope! There are those who will discover that their neighbor is Jesus himself, although they belong to the mass of those who do not know Christ or who have forgotten Him." Later in the book, Day went on: "I have said, sometimes flippantly, that the mass of bourgeois smug Christians who denied Christ in His poor made me turn to the Communists, and it was the Communists and working with them that made me turn to God."

The distinction between the canonized, the un-canonized and even the unbaptized or unbelieving saints was not [Dorothy] Day's concern, and she appealed to Gandhi for intercession as she did to St. Francis or our Lady.

Another prelate who has sown confusion about Day's person, life and works was the late Chicago Cardinal Francis George. In an interview for The New York Times Magazine in 1998, George told Day's biographer Paul Elie, that "for all her anarchism, she said nothing about the structure of the church" and "remember, Dorothy Day did not turn her criticism of the social order on the church."

Speaking from his mansion that Elie described as "a Victorian pile on the Gold Coast, the ritziest neighborhood in Chicago," George dismissed the suggestion that he might be challenged by Day's determination to "make the rich poor and the poor holy."

Perhaps George took too much comfort in Day's often repeated resolution "to find points of agreement and concordance" rather than points of disagreement, especially when dealing with bishops. If Day counted Elizabeth Gurley Flynn and Angela Davis among her sisters, it should be remembered that in 1967, she cited Jesus' warning that "our worst enemies are those of our own household" in reference to New York Cardinal Francis Spellman and New Orleans Archbishop Philip Hannan, two bishops who publicly supported the war in Vietnam:

"Words are as strong and powerful as bombs, as napalm," Day wrote in a 1967 column. "How much the government counts on those words, pays for those words to exalt our own way of life." Day confessed that "in the presence of the Blessed Sacrament," she would "wrestle for that peace in the bitterness of my soul" to change her heart "from hatred to love" of such enemies.

George might also been misled and lulled by Day's often stated deep love for the church, imagining that in her love she gave the institution a pass. "I feel that over and over again in history the church has become so corrupt it just cries out to heaven for vengeance," she said in a 1971 interview with NCR. "… The crisis is something terrific. I think it's a result of the corruption in the institutional church, through money and through their acceptance of the lousy, rotten system."

And the walls of George's Gold Coast palace could have been so thick as to insulate him from reality enough to dismiss Day's poverty as romantic and make him feel safe from her judgment, as quoted by biographer Robert Coles, that "when I see bishops living in luxury and the poor being ignored or thrown crumbs, I know that Jesus is being insulted, as He once was, and sent to His death, as He once was." 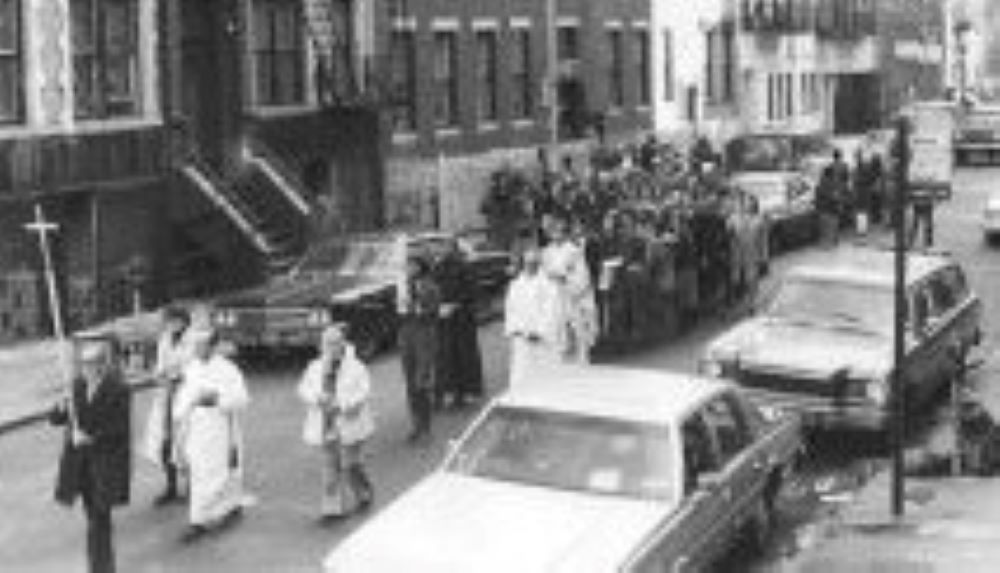 The funeral procession for Dorothy Day makes its way to the Church of the Nativity in New York Dec. 2, 1980. The building, which the Archdiocese of New York sold and decommissioned in 2020, was the parish Day attended. (CNS/Tom Lewis)

In admiring Day, the popular columnist Oblate Fr. Ronald Rohlheiser also dismissed her. In a 2016 column, "Of Guns and Pacifism," he addressed the question, "So how realistic is it to refuse to arm ourselves? How realistic is it to pray to be disarmed?" and concluded that while the examples of Day, Martin Luther King Jr. and Daniel Berrigan are praiseworthy, they are not realistic at all.

"Indeed, it might be said that those who argue for radical pacifism can do so only because they are already protected by police and soldiers with guns," Rohlheiser wrote.

We need pacifists in the same way as we need vowed religious celibates, that is, we need gospel-inspired persons to give a particular, sometimes-singular, witness to what the Gospels ultimately point to, namely, to a place beyond our present imagination, a heaven within which we will relate to each other in an intimacy which we cannot yet imagine and where there will be no arms or weapons. In heaven, we will be utterly defenseless before each other. There will be no guns in heaven.

For Rolheiser, as for George, Day's pacifism was but a prefigurement of a faraway unimaginable never-land and not as she, King, Berrigan and Pope Francis insist: an urgent requisite for continued human survival on this planet.

For Rolheiser and George, Day is a saint and to them that means that she must be impractical and utopian, a romantic relegated forever to the fringe. Praising her is enough and no one, really, has to pay any attention to her. That kind of talk made Dorothy Day sick.

I met Day in 1975, when I was 19 years old and she was 78. Raised nominally Catholic, I had been taught to venerate the saints, but coming to the Catholic Worker in New York was the first time that the possibility of living like them was even raised. This was a shocking new awareness to me.

The devotion to the saints that imbued Day and the house was not so much one of overbearing piety as of easy familiarity. The icons and other images of the saints on the walls were interspersed at random with photos of friends and community members. One walking into St. Joseph House would see the image of Our Lady of Guadalupe next to a poster of Che Guevara. The distinction between the canonized, the un-canonized and even the unbaptized or unbelieving saints was not Day's concern, and she appealed to Gandhi for intercession as she did to St. Francis or our Lady.

I will not be celebrating with my friends on Dec. 8 as Day's cause is kicked up the ladder, but I do not begrudge them and I wish them well. Whether the canonization process will make Day's life and works more known as they hope, or make her even harder to find as I fear it has already, our work will remain.

Editor's Note: Story has been updated to correct a reference to Dorothy Day's age.