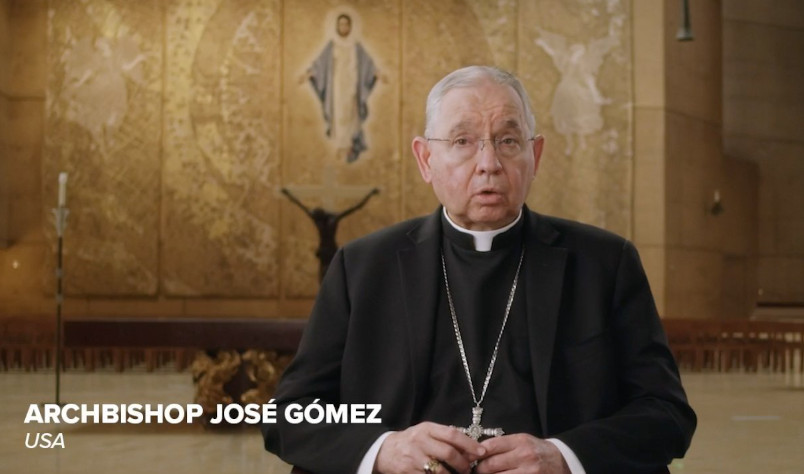 Los Angeles Archbishop José Gomez, president of the U.S. Conference of Catholic Bishops, is pictured in a video for an ad campaign promoting COVID-19 vaccines throughout the Americas. (CNS Screenshot/courtesy Ad Council)

Several leading Catholic theologians, academics and activists have signed onto a petition calling on Los Angeles Archbishop Jose Gomez to apologize for his Nov. 4 speech in which he denigrated social justice movements as "pseudo-religions."

The petition, which has garnered the signatures of more than 9,000 Catholics and others, is the latest development in the fallout from Gomez's controversial address to the Congress of Catholics and Public Life in Madrid.

In the speech, Gomez framed today's social justice activism, including the anti-racist movement in the United States, as an angry Marxist-inspired, anti-Christian expression of a corrosive secularism being pushed by an "elite leadership class."

"In fact, as they see it, religion, especially Christianity, only gets in the way of the society they hope to build," said Gomez, who is also president of the U.S Conference of Catholic Bishops.

"Your speech was particularly painful and offensive to Black Catholic advocates in the United States who have organized for racial justice in the face of indifference and even hostility from many white Christians," reads the new petition, which was released Nov. 12 and was organized by Faith in Public Life and Faithful America.

Fr. Bryan Massingale, a leading Fordham University theologian and author of Racial Justice and the Catholic Church signed the petition, as did Shannen Dee Williams, a history professor at the University of Dayton who is a leading scholar of Black Catholic history in the United States.

Other notable signees include Miguel Diaz, the former U.S. ambassador to the Holy See who is now a theologian at Loyola University Chicago; Kathleen Dorsey Bellow, director of the Institute for Black Catholic Studies at Xavier University of Louisiana, Patricia McGuire, President of Trinity Washington University; and Fr. Clete Kiley, chaplain for the Chicago Federation of Labor and board member of the Catholic Labor Network.

In a press release about the petition, several signers criticized Gomez's remarks. Williams said the denial of the dignity and sanctity of Black life is "a part of the DNA" of the United States.

"It is also a foundational sin of the American Catholic Church," Williams said. "Black Catholic history reveals that the church has never been an innocent bystander in the history of white supremacy."

Kiley described Gomez's description of social justice movements as "bizarre, unscholarly, and [lacking] coherence theologically." Said Kiley: "Coming from an archbishop, these remarks are really troublesome and embarrassing. Coming from the president of our Catholic bishops' conference, they are a scandal."

Craig Ford, a theology professor at St. Norbert College in Wisconsin, urged Gomez to meet with social movement leaders and theologians to find common ground in their shared commitment to human dignity.

"Black Lives Matter and other justice movements are secular expressions of Jesus' presence among those who are reviled and rejected," Ford said.

But in Gomez's stated view, modern secular movements like Black Lives Matter are rival ideologies that are trying to "cancel" or push Christianity out of public life. Gomez suggested that the church can only engage those movements not on social or political terms, "but as dangerous substitutes for true religion."

"His derisive use of the term 'woke' is commonplace among those who feel the power they have traditionally wielded is threatened by those who call for greater justice, equity and social change," the Pax Christi statement said.

On Nov. 10, the leadership of the Association of U.S. Catholic Priests also released a statement critical of Gomez's comments.

"Being one who has dedicated most of my ministry to the social justice portion of the Gospel, I felt disdain at his words, my life's work dismissed," added Fr. Michael Bausch, vice-chairman of the AUSCP Leadership Team.

The new petition encourages Gomez to embrace the "Church in the streets" called for by Pope Francis by finding common ground "with a new generation of social justice leaders who, in the language of Vatican II, are reading the 'signs of the times' and inspiring diverse movements of people who are putting their faith into action."