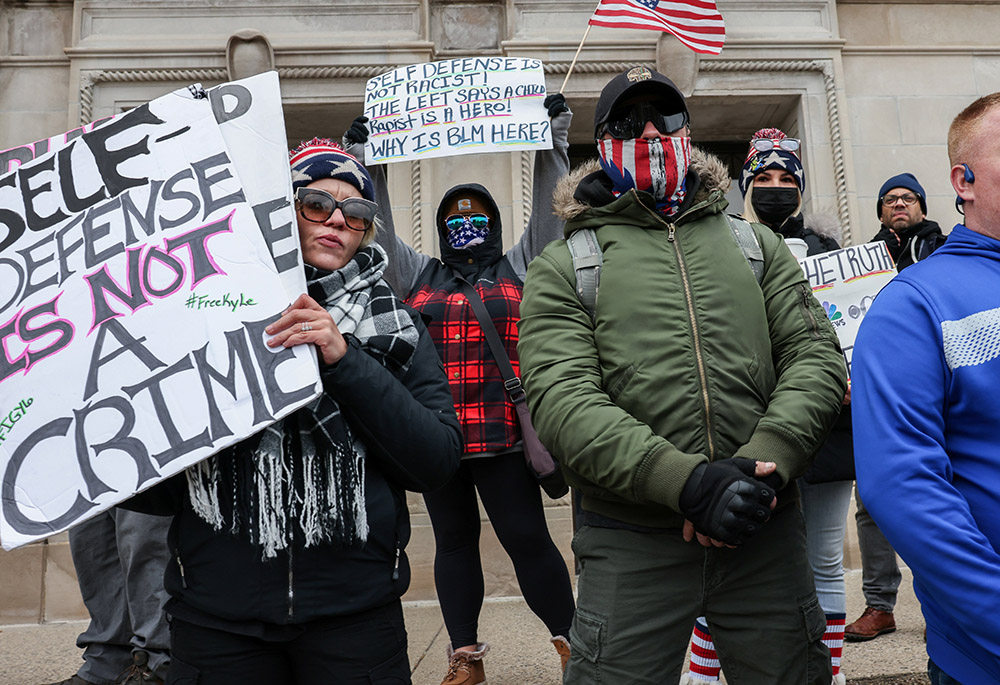 Protesters in Kenosha, Wisconsin, demonstrate outside of the Kenosha County Courthouse Nov. 16, as the jury deliberated in the trial of Kyle Rittenhouse. On Nov. 19, the jury acquitted him in the shooting deaths of two people and the wounding of another with an AR-15-style rifle Aug. 25, 2020, during civil unrest in Kenosha over the shooting two days earlier of a Black man, Jacob Blake, by a white police officer. Lawyers for Rittenhouse argued their client acted in self-defense. (CNS/Reuters/Evelyn Hockstein)

On Nov. 24 — in a prosecution that almost did not happen — three white men were found guilty in the shooting death of 25-year-old Ahmaud Arbery.

Following public pressure the district attorney prosecuted William Bryan, Greg McMichael and his son Travis McMichael in the February 2020 murder of Arbery. Footage of the murder, which played a pivotal role in the district attorney's decision, shows how the men chased and killed Arbery in southern Georgia. Arbery was unarmed at the time of his death. His name, along with George Floyd and Breonna Taylor, became symbols of the anti-racism uprisings of summer 2020.

The verdict arrived five days after 18-year-old Kyle Rittenhouse was acquitted of all charges in the fatal shooting August 2020 in Kenosha, Wisconsin. Rittenhouse, armed with a semi-automatic rifle, shot and killed two men and wounded a third during a protest after Jacob Blake was shot and paralyzed by a white police officer.

Another recent verdict, reached a day before the verdict in the Arbery trial, convicted far-right organizers for their instigation in 2017's Unite the Right rally in Charlottesville, Virginia, which resulted in the death of 32-year-old Heather Heyer. More than $20 million in damages were awarded by the jury to counterprotesters present that day.

Many are attempting to contextualize these verdicts among what feels like a two-party criminal justice system: one for white people and another for individuals of color. Under our current system, teenagers like Rittenhouse are allowed to go free while thousands of Black and brown teenage women, men and children are imprisoned for nonviolent offenses. 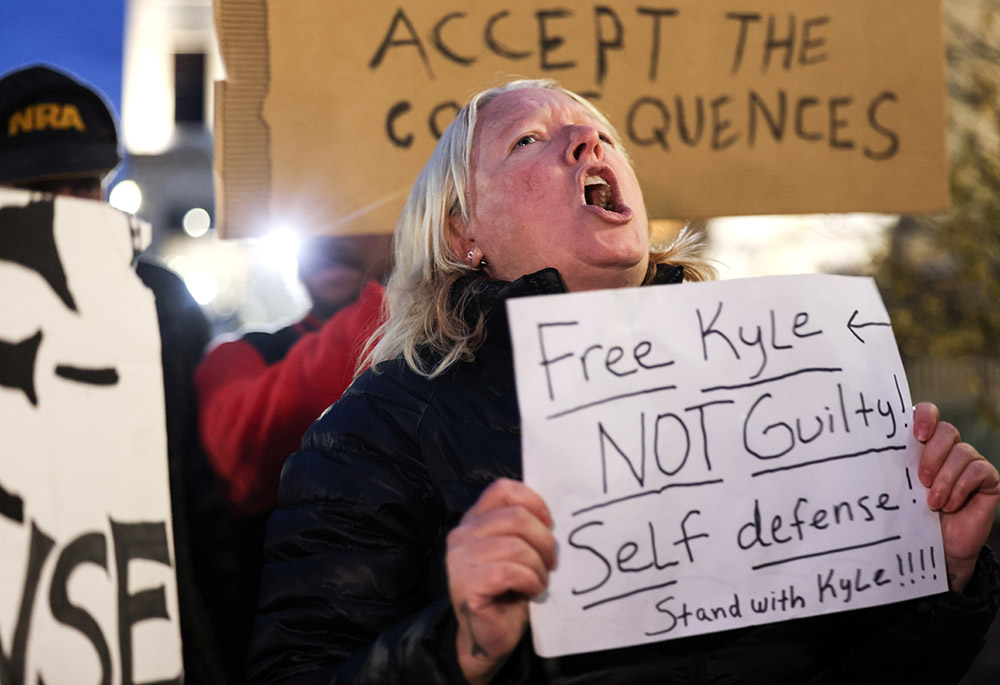 Protesters in Kenosha, Wisconsin, demonstrate outside the Kenosha County Courthouse Nov. 15, during the trial of Kyle Rittenhouse. On Nov. 19, the jury acquitted him of the shooting deaths of two people and wounding of another with an AR-15-style rifle Aug. 25, 2020, during civil unrest in Kenosha over the shooting two days earlier of a Black man, Jacob Blake, by a white police officer. Lawyers for Rittenhouse argued their client acted in self-defense. (CNS/Reuters/Evelyn Hockstein)

As Catholics, a commitment to justice is an integral part of our vocation and tradition, from the moment Moses came down from Mount Sinai with the tablets to this very moment. A church that does not pursue justice is a church alienated from itself. As Catholics, amid the polarization and culture wars of our church, how are we called to show up during these moments?

Following the verdict against Arbery's killers, Atlanta Archbishop Gregory Hartmayer released a statement in which he prayed for the Arbery family and called on Catholics to commit ourselves to anti-racism work. "We still have plenty of work to do in America to live up to the ideals of justice and equality that we say we represent. Let us use this moment to rededicate ourselves to the intentional, difficult and uncomfortable work of naming and eradicating systemic racism."

The ongoing work the archbishop spoke of demands that we as Catholics advocate for a reforming of the criminal justice system. This includes amending or revoking laws like those in Wisconsin, which vastly expand the scope of self-defense claims, like that of Rittenhouse.

This work also requires a church leadership dedicated to anti-racism work. Despite an increased demand from Catholics who are Black, Indigenous and people of color — especially following the death of George Floyd last year — our church has yet to grapple with its own history and relationship to systemic oppression. Eradicating systemic racism requires a church leadership — one that failed to address racism at their annual gathering, while also choosing to dedicate time and millions of dollars to eucharistic revivals — to invest in authentic anti-racism work. This can allow Catholics to use the tools of our tradition to build a more equitable criminal justice system.

Advent is a time for vigilance and preparation. We are called to be penitent and prepare for Christ's birth. This year, let us use this season to recommit ourselves to eliminating systemic oppression in our nation and to push the church toward being better allies to communities constantly under the threat of violence.

A version of this story appeared in the Dec 10-23, 2021 print issue under the headline: Our church must commit itself to anti-racism work.