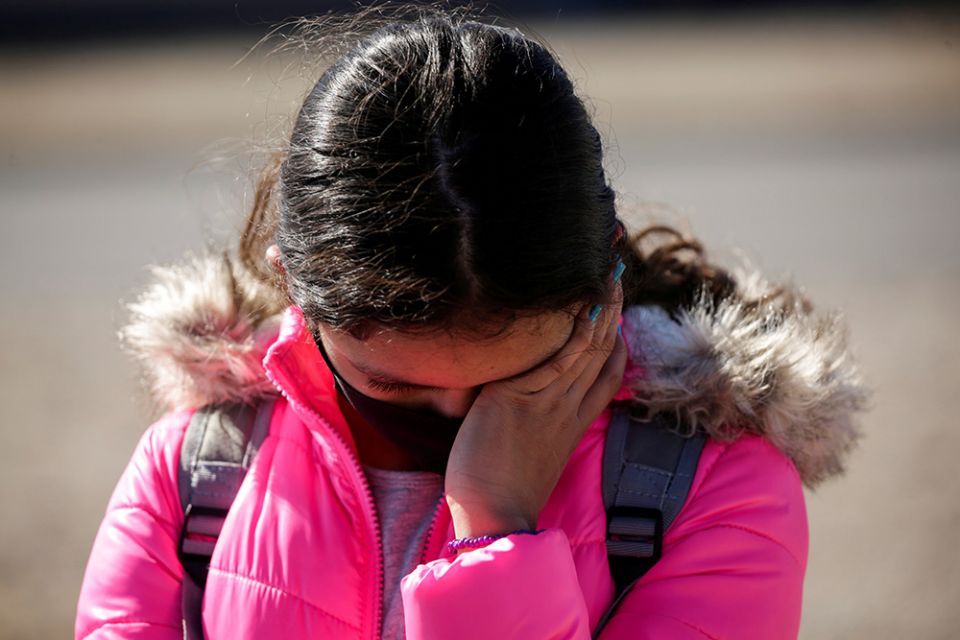 A migrant girl from Central America cries before crossing the Rio Bravo with her family in Ciudad Juárez, Mexico, Feb. 5 to request asylum in El Paso, Texas. (CNS/Reuters/Jose Luis Gonzalez)

President Joe Biden's quick reversal of some of the most abusive of Donald Trump's immigration policies was both expected and welcomed. But returning to some version of the pre-Trump era is a minimal start. Justice requires a much deeper commitment to seeking the truth in order to accomplish comprehensive immigration reform.

Candidate Trump's first big lie was spoken June 16, 2015, the day he announced his run for office. He had delivered fewer than 250 words of his first speech when he began spewing the vile characterization of Mexican migrants as "people that have lots of problems" and who bring drugs and crime into the country. "They're rapists," he said.

It was the original double-barrel dose of ignorance and hate we'd hear from the unlikely candidate, but not the last as he went on to become a disastrous and failed president.

As in so many areas of policy, Trump was not inventing anything new but rather steamrolling norms and pushing already bad policy to intolerable extremes.

He mandated that families be torn apart at the border; that children be separated from parents and caged in deplorable conditions; that those seeking refuge from extreme violence and civil disorder be turned away and forced to live in precarious circumstances in Mexico while north of the border legal gears ground slowly. Those previously protected under the Deferred Action for Childhood Arrivals program were left to live in terror of being deported to countries they'd never known.

Much can be restored by executive order. The difficult-to-look-at-reality, however, is that what the Trump administration perpetrated on migrants is, in many ways, an extension of atrocities visited in the past on those countries' populations with the complicity of prior U.S. administrations.

If we don't confront that history, then our "moving on" will likely include the same presumptions of superiority and domination that led us to this current circumstance.

When the Eisenhower administration decided to take up the monopolistic interests of the United Fruit Company and overthrow a duly elected government in Guatemala in 1954, it initiated civil unrest that culminated in a 36-year civil war. Near the end, General Efraín Ríos Montt, one of a string of brutal dictators and a favorite of President Ronald Reagan, oversaw what the U.N. termed a genocide of indigenous peoples.

The horrors of the 12-year civil war in El Salvador were abetted by millions of dollars per day in military aid to repressive governments during the Carter and Reagan administrations, as well as U.S. training of some of those who committed the worst human rights abuses.

Reagan employed the ever-useful Cold War-era threat of impending communist domination to justify interference in Nicaragua and Honduras. The U.S. during that period militarized Honduras and destabilized its economy while training Contra rebels to overthrow the government in neighboring Nicaragua.

We in the United States are deeply connected to the circumstances, including this era's drug trade, that result in desperate refugees showing up at our border.

There are alternatives, but they would require a drastic change in the way the United States approaches the world. Sen. Timothy Kaine (D-Virginia), in a recent conversation with NCR Executive Editor Heidi Schlumpf and others, said he is convinced that the United States "spends way too much time thinking the world only has an East-West axis and doesn't think it has a North-South axis." Most of our foreign relations attention is paid to Europe, the Middle East, China, Russia, Japan. "But the attention to Africa and Central and South America has been episodic."

Partly a result of his experience as a Jesuit volunteer working in Honduras in 1980, he advocates today for "an all-Americas program, from Tierra del Fuego to the Yukon."

The U.S., with a population of 300 million, he argues, might find it difficult to match up as a global competitor with China and its population of more than a billion. Taken together, he said, the Americas have about a billion people. "The more we do together as equals and friends and allies with deep cultural connections — I think it's not only the just thing to do, I think it's the strategic thing."

Trump may be singularly gifted in constructing the big lie, but U.S. relations with Latin America historically are riddled with lies and deceptions. Biden's sense of human dignity will go far in immediately reversing the vilest of Trump immigration policies. But he should take the opportunity of the moment to "go big" and pursue an "all-Americas" approach on immigration.

As a start, his administration, taking a lesson from some of our neighbors to the south, should assemble a truth commission to scrutinize the history of U.S. involvement in Latin America. Time enough has passed that able experts from a variety of disciplines and political persuasions might soberly assess a history that spanned several eras, administrations of both parties, as well as ambitions noble and selfish.

Latin America was never a disconnected entity and in today's global reality, those connections are more real and intense than ever. Let's try to understand where we've been before trying to move beyond the traumas of today. If not, our policy will continue to be haphazard, a reaction to perceived crises, and ultimately ineffective.

A version of this story appeared in the Feb 19-March 4, 2021 print issue under the headline: Executive orders on immigration just a start .

El Salvador struggles to come to terms with violent past