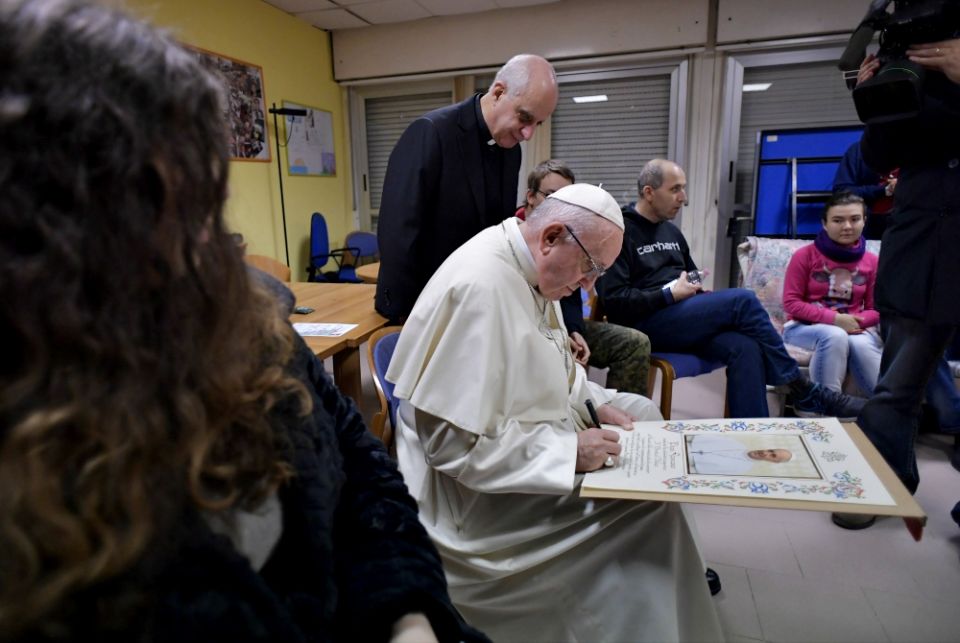 When Georgetown University launched its Initiative on Catholic Social Thought and Public Life, the venture benefited from the popularity of a relatively new pope.

People packed the university's Gaston Hall one October evening in 2013 for the first of what would become a series of conversations on "The Francis Factor."

As we reported at the time, John Carr, director of the initiative, opened the event "by wondering what a publisher, pre-Francis, would say to the outline of a book that began with the first resignation by a pope in 600 years and was followed by the election of an old Jesuit who rode the bus to work as the archbishop of Buenos Aires, Argentina; who announces a church for and of the poor; lives in a guest house instead of the papal palace; and spends Holy Thursday washing the feet of young people in prison."

"He'd say don't waste your time or mine," Carr said. "Well, I can't wait for the next chapter."

The chapters since have not disappointed in terms of Vatican intrigue and departure from past practice. Francis' papacy has been nothing if not consistently interesting and challenging — an open, inclusive, approachable and warmly pastoral approach with an emphasis on those in the margins that goes far beyond words in a papal document.

Six years later, a capacity crowd in Georgetown's Dahlgren Chapel heard described some of the jitters and "confusion" rippling across the community in the wake of Francis' approach to church governance. Those attending the recent event also heard an archbishop speak of the scandalous organized opposition to a pope who is highly critical of two particularly American idolatries: money and militarism.

At home or on the road, the lens capturing this papacy has moved from the previous spectacle of crowds in thrall of a commanding stage presence to a somewhat bowed figure surrounded by refugees and the disabled, in the midst of those whose neighborhoods represent the most destitute on Earth, kneeling to wash the feet of the incarcerated.

Catholic identity, once a calculus of rigid rule-keeping, has shifted more to a practice of mercy and accompaniment.

Francis has moderated the recent excesses in the use of law to determine membership in the community, and he has opened up new possibilities for grace to work in the lives of those seeking the embrace of God. He has replaced the image of the border-patrol bishop, making sure that no one unworthy gets in, with that of the shepherd accompanying the flock, acquiring the smell of the sheep, at times shuffling over and blurring the boundaries.

Perhaps in the same way that rigid legalisms were viewed by some segments of the Catholic community as inhuman and obstacles to God's grace, this new approach, with its inherent messiness and lesser regard for the letter of the law, may be off-putting to others.

The word "confusion" is often applied by those who find unsettling Francis' more pastoral approach compared to recent papacies. His language and even his daily routine follow his clear intent to remove the stench of royalty and privilege from the world of Catholic leadership.

Maybe we need to understand that the differences we perceive are facets of the same infinitely diverse and compassionate God. No single papacy or interest group in the community captures it all.

What should be intolerable in any quarter, however, are the ad hominem attacks on Francis, some of the loudest clearly questioning his very legitimacy. Such attacks are transparent attempts to maintain ecclesial privilege and status or to disguise the faith in the comforts of the prevailing culture.

In the United States, as we have amply documented in this space, "conservative" or "orthodox" is often shorthand for describing a faith ensconced in American economics and national ambitions. Francis, in his critique of an economy that "kills" or in his absolute condemnation of the possession of nuclear weapons, as well as his severe criticism of the excesses of the clerical culture, has certainly afflicted the comfortable on many levels and in more than a few corridors of power.

Opposition to papal positions or teaching is nothing new. But the displays of disdain for Francis seem of a different caliber quantitatively and qualitatively, a reality acknowledged by Washington Archbishop Wilton Gregory during the recent Dahlgren Dialogue.

"The thing that I think makes [the opposition] different now is social media. The opposition now has a microphone that has no volume control on it," he said, adding, "What's different, however, is that this is organized, and it is well-funded, and it is prominent in social media. I think it's scandalous, personally. I don't think Francis is afraid of criticism. He's a Jesuit. What does cause him headaches is the insidiousness of the opposition."

If Christianity were nothing more than a moral code with unambiguous teachings that never changed, we wouldn't still be finding infinite meaning in the words of Jesus and endless fascination with the implications of the universal Christ. Instead, we are confronted with a God of love, we say repeatedly. It is a God of infinite compassion and mercy who engages us in profound matters of the heart, the dimensions of which are incalculable. For the Catholic Christian, there should not be anything confusing about modeling that compassion and the embrace of those whose lives might fall outside some perceived ideal.

Francis has quoted his immediate predecessor, Pope Benedict XVI, explaining that faith is not a matter of philosophy or dogma, but an encounter with Jesus Christ.

Helen Alvaré, a law professor, noted pro-life advocate, and Dahlgren Dialogue participant, said, "I think of Francis' pontificate as an extended meditation on the good Samaritan story. He is highlighting who are the people strewn on our path right now, and that's been a change over time over different papacies."

If a little confusion exists, maybe it is a blessing, leading, if not to absolute answers, then, far more important, to correct questions. If the original Twelve who encountered the living Christ are any example, we can take serious consolation. They are the best indicators that faith is not a matter of certainty and that confusion can be a path that sends us deeper into the mystery.

Here's hoping for a lot more chapters ahead.

A version of this story appeared in the Dec 13-26, 2019 print issue under the headline: Some Catholic confusion may be a blessing .

Editorial | Editorial: If a little Catholic confusion exists, maybe it is a blessing

Mind your own business each day to grow in holiness, pope says