Editorial: Time for Pope Francis to speak up about Russia's invasion of Ukraine 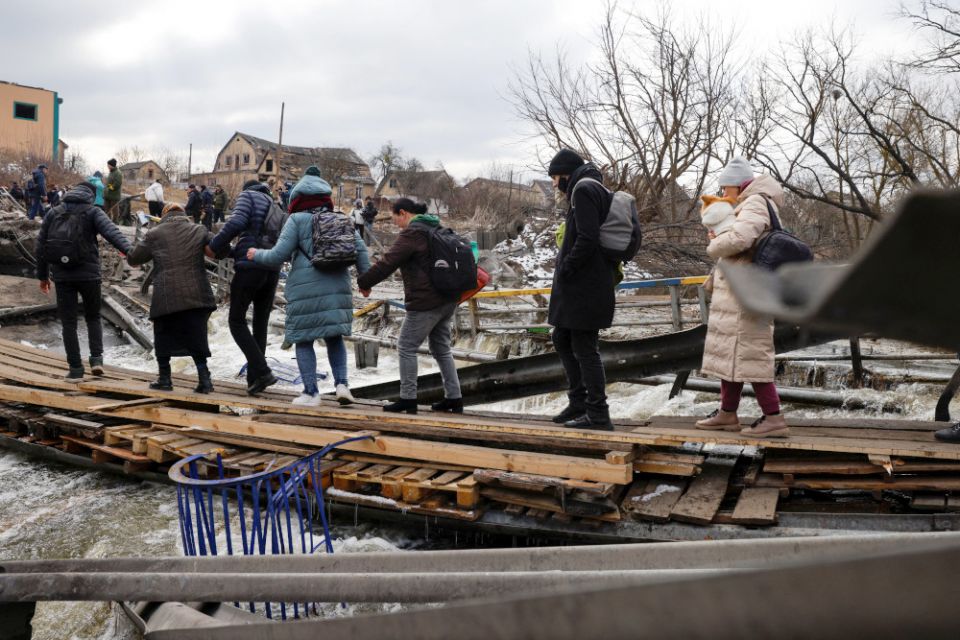 The Russian invasion of Ukraine is the first war in Europe of the 21st century. As such, it poses unique challenges to the world. And the pope, the most universally recognized voice of moral authority in the world, must find his voice and calibrate it to meet those challenges.

The first fact that commands attention is that the aggressor is also a nuclear power. Any steps that escalate the war must be weighed against the possibility that such escalation might entice Russian President Vladimir Putin to order the use of nuclear weapons. That line has not been crossed since 1945 and it must not be crossed ever again. Russia analyst Fiona Hill has warned that Russia's hypersonic nuclear missiles are a real threat. The pope needs to speak, and speak clearly, to stigmatize any recourse to even tactical nuclear weapons.

The rise of ethno-nationalism has challenged the vision of a peaceful, unified Europe for which the Vatican has so long labored. Hungarian President Viktor Orban is a thug but he has not invaded his neighbors. Brexit was dumb, not murderous. The violence of the attack on Ukraine makes the pope's moral voice even more necessary.

This is among the first conflicts in which the ubiquity of handheld devices has resulted in real-time documentation of the atrocities being committed. It was one thing to read about the murders in Srebrenica or the genocide in Rwanda. Now, every day, videos of Russian bombs hitting apartment buildings in suburban Kyiv and Kharkiv make their way to televisions around the world. The Holy Father needs to give voice to the suffering people in Ukraine, to the sense of solidarity and anger all decent people feel when confronted with such atrocities.

We know that Pope Francis is capable of articulating a moral vision with clarity. Throughout his nearly nine-year papacy, he has lamented a range of conflicts around the globe and often said we are experiencing a "third world war, fought piecemeal." The pope has also sharply criticized individual governments, including those in Myanmar, Syria and the United Arab Emirates.

Francis has also been unique among world leaders — and among Catholic bishops — in the degree of passion and specificity he brings to his denunciation of the evil effects of neoliberalism and its ugly children, income inequality and environmental degradation. The Holy Father's incisive criticisms have entered the moral lexicon for us all: "Throwaway culture," "globalization of indifference" and "economy of exclusion," are now used by theologians and ethicists throughout the world.

So, it was not surprising that some Vatican watchers have been puzzled that Francis' voice on Ukraine has been more ambivalent, less strident. He went to the Russian embassy to the Holy See the day war broke out, a powerful gesture to be sure, but the visit was not accompanied by any kind of personal denunciation of the aggression. 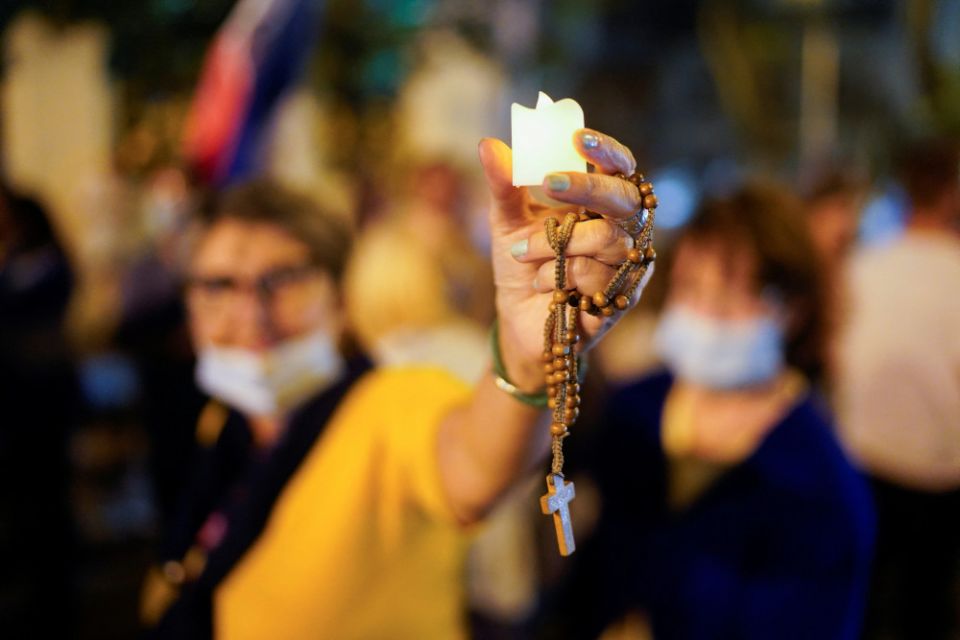 A woman holds a votive candle and a rosary during an anti-war protest outside the Russian Embassy in Montevideo, Uruguay, March 2 in support of Ukraine amid Russia's invasion. (CNS/Reuters/Ana Ferreira)

No one wants to see a pope calling for any kind of a holy war. The entanglement of Christianity with nationalism is almost always ugly and regrettable.

Vatican Secretary of State Cardinal Pietro Parolin actually echoed one of Putin's talking points in a videotaped appeal for peace issued on Feb. 24, saying: "This appeal acquires a dramatic urgency after the beginning of Russian military operations in Ukrainian territory." At least on March 6 the pope was more accurate when he said during his weekly Angelus address: "Rivers of blood and tears are flowing in Ukraine. It is not merely a military operation, but a war, which sows death, destruction and misery."

The pope also announced that he was sending two cardinals to the region, Konrad Krajewski, the papal almoner, and Michael Czerny, interim prefect of the Dicastery for Promoting Integral Human Development. The two will be focused on addressing the humanitarian disaster that is an immediate consequence of the war.

Of course, the church must be at the forefront of efforts to alleviate the suffering of those who are fleeing Ukraine. And no one wants to see a pope calling for any kind of a holy war. The entanglement of Christianity with nationalism is almost always ugly and regrettable.

We also note that this pope has gone further in redirecting the church's teaching toward nonviolence, raising questions about the continued applicability of just war theory. 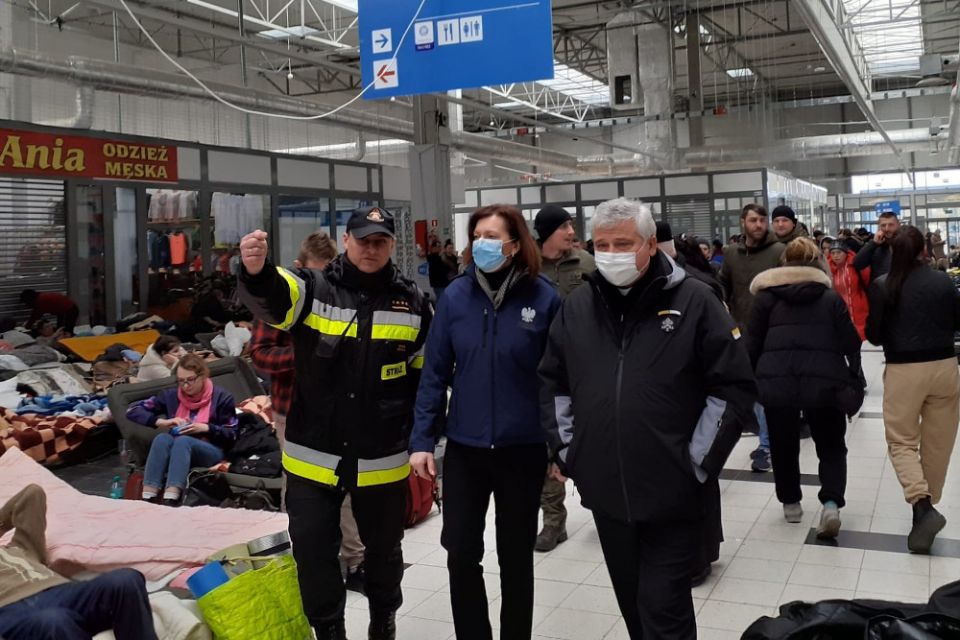 Cardinal Konrad Krajewski, the papal almoner, visits Ukrainian refugees in Korczowa, Poland, March 8 at a supermarket that was turned into a temporary refugee center. (CNS)

We admit, too, that we do not know the extent of Vatican efforts to affect a diplomatic resolution of the crisis. The Vatican has offered itself as a mediator for the conflict and called for humanitarian corridors to be established.

But no one at the Holy See has gone as far as Archbishop Stanislaw Gądecki, the president of the Polish bishops' conference, who unambiguously denounced the invasion. "The time will come to settle these crimes, including before the international courts," Gądecki wrote in a March 2 letter to Patriarch Kirill, head of the Russian Orthodox Church. "However, even if someone manages to avoid this human justice, there is a tribunal that cannot be avoided."

Based on the evidence of the past few years, any hope that the Russian patriarch might stand up to Putin or even try to serve as an honest broker is misplaced. The adjective making the rounds of the Vatican is "delusional." Patriarch Kirill has been nothing but a pawn for Putin and there is no reason to think this leopard will change his spots.

Whatever is happening behind the scenes, it is time for Francis to speak the truth about the murderous assault on Ukraine. It is time to speak as clearly about Putin's warmongering as he has about the disastrous premises and consequences of neoliberalism. It is time to call things as they are. This is Putin's war and it is evil.

A version of this story appeared in the March 18-31, 2022 print issue under the headline: Francis needs to speak up about Russia's invasion .

Editorial | Editorial: Time for Pope Francis to speak up about Russia's invasion of Ukraine