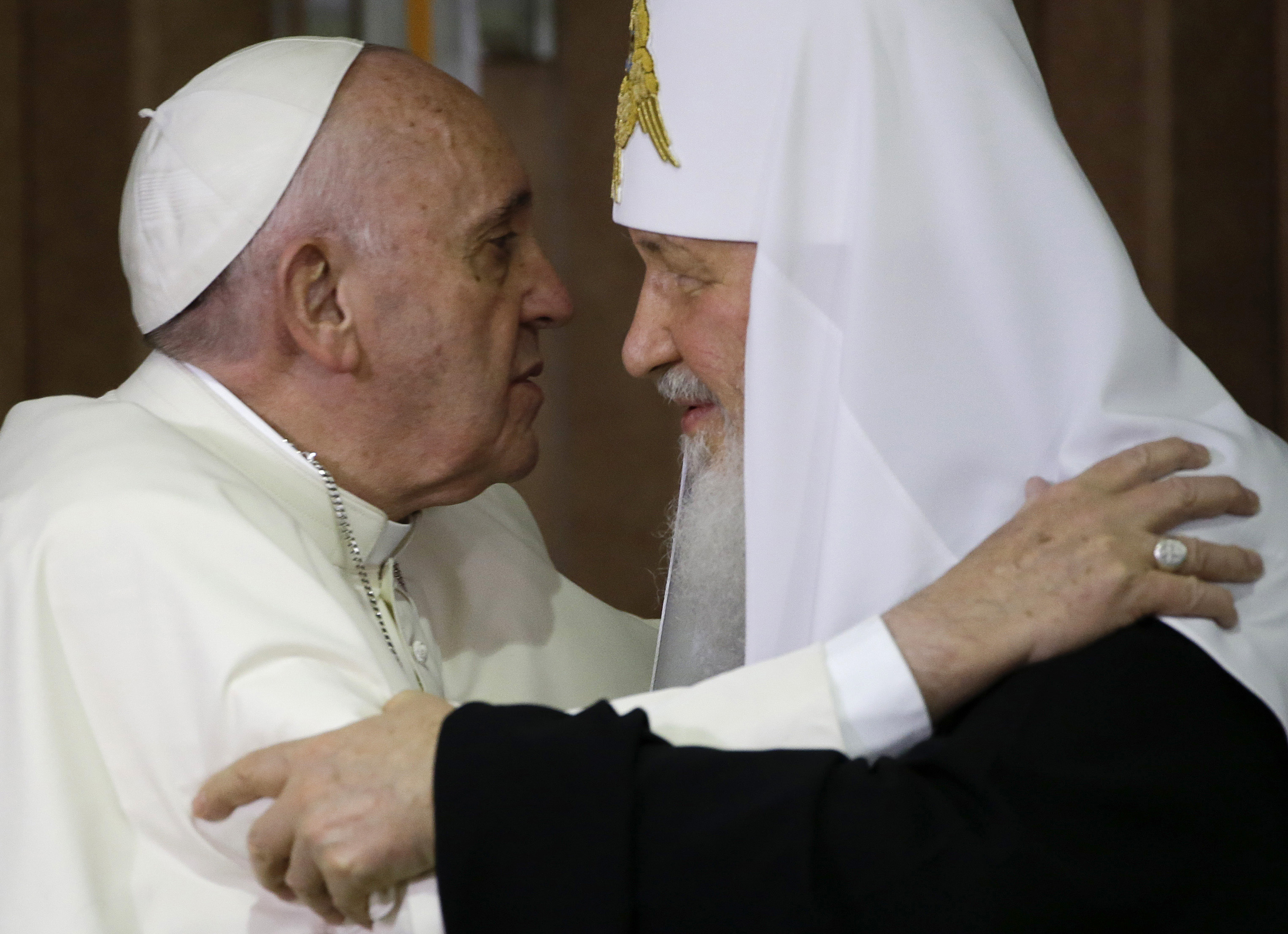 Pope Francis, left, embraces Russian Orthodox Patriarch Kirill, head of the Russian Orthodox Church, after signing a joint declaration on religious unity in Havana, Cuba on Feb. 12, 2016. Poland's Archbishop Stanislaw Gądecki has urged Kirill to use his influence on Russian President Vladimir Putin to demand an end to the war in Ukraine. (AP/Gregorio Borgia)

The head of the Polish bishops' conference has done what Pope Francis has so far avoided doing: He publicly condemned Russia's invasion of Ukraine and urged the head of the Russian Orthodox Church to use his influence with Vladimir Putin to demand an end to the war and for Russian soldiers to stand down.

"The time will come to settle these crimes, including before the international courts," Archbishop Stanislaw Gądecki warned in his March 2 letter to Patriarch Kirill. "However, even if someone manages to avoid this human justice, there is a tribunal that cannot be avoided."

Gądecki's tone contrasted sharply with the comparative neutrality of the Vatican and Francis to date. The Holy See has called for peace, humanitarian corridors, a cease-fire and a return to negotiations, and even offered itself as a mediator. But Francis has yet to publicly condemn Russia by name for its invasion or publicly appeal to Kirill, and the Vatican offered no comment on the Russian strike on Europe's largest nuclear plant that sparked a fire Friday.

For a pope who has declared the mere possession of nuclear weapons immoral and cautioned against using atomic energy because of the environmental threat posed by radiation leaks, the silence was even more notable.

'Even if someone manages to avoid this human justice, there is a tribunal that cannot be avoided.'
—Archbishop Stanislaw Gądecki

The Vatican has a tradition of quiet diplomacy, believing that it can facilitate dialogue better if it doesn't take sides or publicly call out aggressors. It has long used that argument to defend Pope Pius XII, the World War II-era pope criticized by some Jewish groups for not speaking out enough against the Holocaust. The Vatican says quiet diplomacy helped save lives then, and it continued that tradition in its Cold War Ostpolitik policy of behind-the-scenes diplomacy.

Francis took an unprecedented step last week when he went to the Russian Embassy to the Holy See to meet with the ambassador. But the only thing the Vatican said about the meeting was that Francis went to "express his concern about the war." He also spoke by phone with Ukrainian President Volodymyr Zelensky.

The Vatican secretary of state, Cardinal Pietro Parolin, took a similarly unusual step this week when, in an interview with four Italian newspapers, he actually named Russia in saying the war had been "unleashed by Russia against Ukraine."

In the case of Ukraine, which counts a few million Catholics among its majority Orthodox population, Francis is not shy about his hopes to improve relations with the Russian Orthodox Church and its influential leader, Kirill. As recently as December, when fears of a Russian invasion were already tangible, Francis expressed hope for a second meeting with Kirill following their historic encounter in 2016, the first between a pope and Russian patriarch in a millennium.

"A meeting with Patriarch Kirill is not far from the horizon," Francis told reporters in route home from Greece. "I am always available, I am also willing to go to Moscow: to talk to a brother, there is no need for protocols. A brother is a brother before all protocols."

Francis' ambassador to Russia, Archbishop Giovanni D'Agnello, met Thursday with Kirill at the patriarch's residence in the Danilov Monastery in Moscow. Kirill's office said the patriarch recalled the "new page in history" opened by the 2016 meeting, expressed appreciation for the "moderate and wise position" of the Holy See in resisting being drawn into the conflict and insisted churches can only be peacemakers.

The Vatican didn't report the meeting and its spokesman didn't respond when asked for comment.

One of Francis' top communications advisers, the Rev. Antonio Spadaro, however, noted Kirill is "facing a great challenge" to weigh the now-growing list of Orthodox priests, metropolitans and ordinary Ukrainian faithful who are begging him to raise his voice against Putin and change position. In an essay published by the Italian news agency Adnkronos, Spadaro didn't count Francis among them, though he quoted the pope as saying recently that it was "very sad" that Christians were making war.

That moderate tone was echoed this week when the Holy See's ambassador to the United Nations stressed the need for humanitarian corridors in Ukraine to allow refugees out and humanitarian aid in. He didn't identify Russia as the reason they were needed, according to the Vatican summary of his remarks.

The Holy See's foreign minister, Archbishop Paul Gallagher, met Wednesday with his Italian counterpart, Luigi Di Maio. The Italian foreign ministry said Di Maio "repeated Italy's firm condemnation of the Russian aggression to the detriment of Ukraine and the commitment to continue on the path of effective and incisive sanctions against the government of the Russian Federation," while helping Ukraine in the "humanitarian, economic and defense areas."

The Vatican, which is sending medical supplies to Ukraine, said nothing after the meeting.

Related: As Ukraine bleeds, Pope Francis and Russian Patriarch Kirill could be negotiators

Such silence has not been shared by the head of the Ukrainian Catholic Church, who has been emphatic in his daily denunciations of the Russian invasion. Nor has it been shared by Polish bishops, who are now helping to mobilize the reception of tens of thousands of Ukrainian refugees who have crossed the border.

"I ask you, Brother, to appeal to Vladimir Putin to stop the senseless warfare against the Ukrainian people," Polish Bishop Gądecki said in his letter to Kirill. "I ask you in the most humble way to call for the withdrawal of the Russian troops from the sovereign state that is Ukraine."

"I also ask you to appeal to Russian soldiers not to take part in this unjust war, to refuse to carry out orders which, as we have already seen, lead to many war crimes," he added. "Refusing to follow orders in such a situation is a moral obligation."